The uniqueness of the UWN technology is to separate fundamental tissue signal from the nonlinear contrast agent signals by modulating the received echoes that are transmitted at different phase and amplitude. The separation is achieved by proprietary combination and modulation of the returned echoes from multiple pulses.  A low-pass filter can be easily used to filter out the linear fundamental signal in the modulated echo signals from the contrast agent.

In the above expression, the maximum transmit magnitude is normalized to ‘1’, and ‘-‘ represents the opposite polarity, or 1800 opposite phase. Figure 1 shows the transmit waveforms in the transmitted pulse sequence. The system transmits the pulse sequence in a designed order and receives the returned echoes accordingly. In low MI imaging the main signal component from tissue is linear component. However, the signal from contrast bubble contains both linear and nonlinear components.

In DC8 the system combines two echo signals from the transmitted pulses with the amplitude of a and 1-a to form a new data set, S1(n). Then, a modulation process is implemented between S1(n) and the returned echo, S2(n), from the transmit pulse of ‘-1’. The modulation process takes the odd time index data from S1(n) and even time index from S2(n) to form a modulated data set. Figure 3 shows the process how to extract the nonlinear signals by such modulation. For the simplicity, the received echo signals are labeled as the echoes from the transmitted pulses [ a  -1  1  1-a]. In Figure 3, the upper part is the diagram of how to extract the nonlinear fundamental from contrast agent and the lower part is the diagram of how to extract the 2nd harmonic signal. 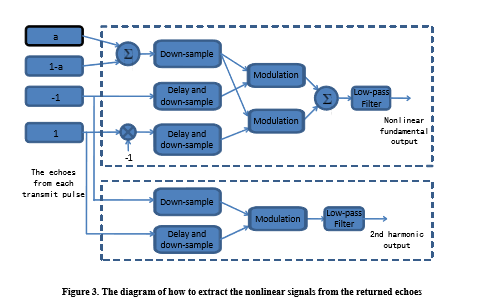 1. Extract the nonlinear fundamental from the echoes of contrast agent

First, to form a full amplitude linear signal, S1(n), by adding the echoes from two transmitted pulses at the amplitude of a and 1-a. The amplitude of the linear component in S1(n) is ‘1’, and the nonlinear fundamental generated by the 3rd order nonlinearity in this new formed signal is proportional to a3+(1‐a)3, where 0 < a < 1. Then, alternatively sample the data between S1(n) with time index 2*i-1, where i = 1, 2, 3, … N,  and S2(n), the echo signal from the transmit pulse ‘-1’ at the time index 2*i, where i = 1, 2, 3, … N. After this process, the linear component will be shifted away from its original position in the spectrum. However, the asymmetric part of nonlinear fundamental will stay at its original position in the spectrum; see the plots from Figure 3 to Figure 8. 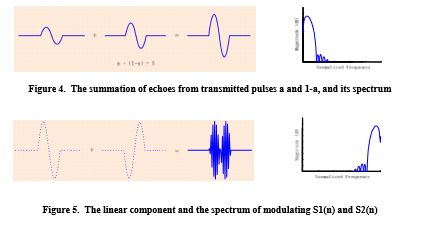 It is shown in Figure 5 the linear component is modulated away from its original position in the spectrum. 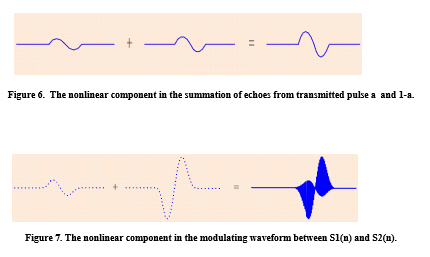 Mindray UWN pulse sequence doubles the NLF sensitivity with a well designed transmitted pulse sequence and the receive modulation process. A similar NLF detection process can be done to combine the echo from the 3rd transmit pulse at the full amplitude of ‘1’ by multiplying with a negative sign ‘-‘. The new resulted NLF signal will be combined with the result in the similar process described previously. By adding two NLF detections it can double the NLF sensitivity..

2. Extract the 2nd harmonic contrast agent signal from the echoes 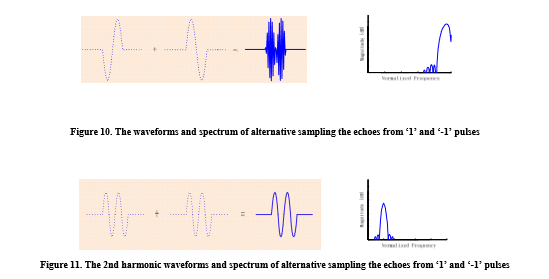 Two approaches can be used to combine the nonlinear fundamental signal and 2nd harmonic signal from contrast agent. One is the so called frequency compounding, in which after the detection of the nonlinear fundamental and the 2nd harmonic two signals are down-converted to base band and combined after the amplitude detection. The other is to do wideband detection, in which each component is down-converted and form a wideband nonlinear contrast imaging in base band.
In summary, by utilizing this pulse sequence strategy of modulation, the UWN technology can effectively separate tissue fundamental signal from contrast agent nonlinear signals. On DC8 system UWN technology provides the unique detection approach to detect both nonlinear fundamental and the 2nd harmonic separately and combines them in a distinguished way. Comparing to other contrast imaging technologies, UWN has the following advantages: 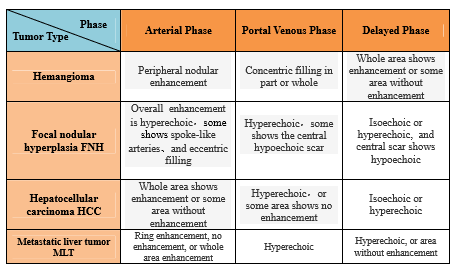 Hemangioma is the most popular benign tumor on liver. Conventional ultrasound image shows hyperechoic on most of hemangioma (67%-79%).  In Contrast imaging at arterial phase it shows fast or slow peripheral nodular enhancement or facelift. Gradually with time it becomes ‘nodular’ or ‘cotton wool’ looking and extends toward the internal of the lesion, shown in Figure 12. 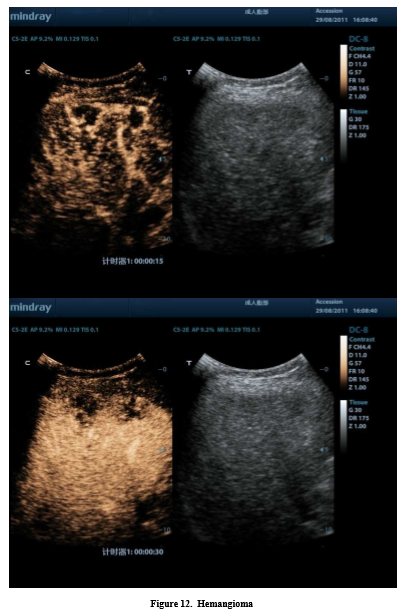 Focal Nodular Hyperplasia is constituted by the proliferation of epithelial cells in benign. Conventional ultrasound imaging shows no abnormal echo from the inside. Compared with the surrounding liver parenchyma it shows isoechoic, or slightly lower or higher echoic, and the boundary is not very clear.  In grey-level ultrasound imaging it is not easy to find the lesion. However, contrast imaging can show the special characteristics on Focal Nodular Hyperplasia. In arterial phase the lesion is enhanced rapidly from the center and spread to the surrounding area and fill the surrounding area uniformly to make it more hyperechoic, shown in Figure 13. Typically, it shows  ‘radiation’ shape, or ‘stellate’ shape of the internal vessels. 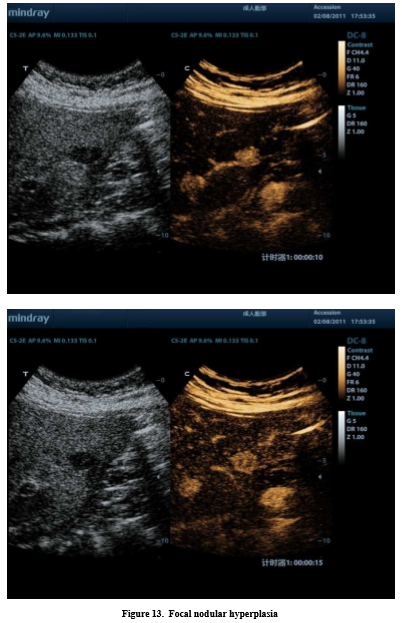 Hepatocellular Carcinoma, mostly occurres on the persons who have chronic hepatitis, or cirrhosis. It has various appearances in conventional ultrasound imaging and is difficult to be distinguished from the other liver tumors. In contrast imaging it shows uniform hyperechoic whole enhancement at arterial phase, see Figure 14.

Metastatic is malignant tumor of the secondary of the liver, or spread to the liver from the other organs. The most common way is the intestinal tumor spreads to the liver by the portal blood flow. Contrast imaging shows some special characteristics on Metastatic. The lesion is often rapidly ring enhanced or whole area enhanced at arterial phase. Enhancement peak often shows a hyperechoic ring shape or overall hyperechoic. As far as the duration time of the enhancement, Metastatic shows fast wash in and out. Compared to HCC, Metastatic’s wash in and out is faster than HCC. Normally, the subside starts at about 25 second after the injection of the contrast agent, shown in Figure 15. 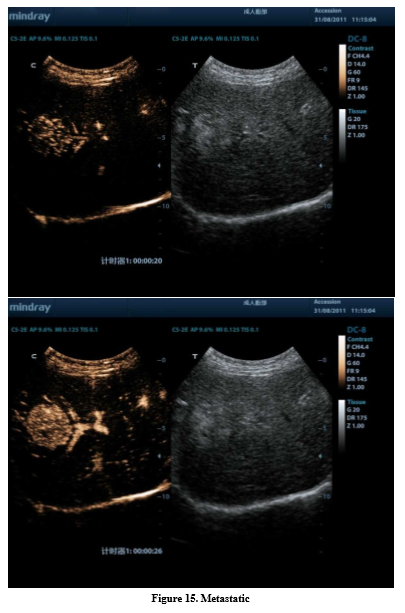 1.1 Background Ultrasound is a standard way to evaluate fetal anatomies. For the examination of fetal brain, one of the most... Read more