Share
Download PDF
Relationship between the stiffness of tumor and it’s malignance has far been known since the ancient Greek[1]. It’s until recent years that people began to measure the stiffness of the tissue in vivo in cancer diagnosis[2,3,4].
Ultrasound strain image is one of the novel approaches to measure the stiffness of tissue from outside the human body. It has potential capability to differentiate the benign breast lesion from malignant tumor which helps avoiding unnecessary painful biopsy for benign breast lesion. Traditionally mammography is the routine method for breast cancer diagnosis, but it has the disadvantages of expensiveness and harmful radiation exposure, and its application in part of Asian women with denser breast tissues is not totally satisfactory.
Like ultrasound TDI image, strain image utilizes the relative movement’s information of adjacent frames to form a picture. The movements can be induced by breathing movements, nearby artery pulsation or external pressure of the probe. Tissue experiences deforming process due to the stress originated from the source of these movements. With the hypothesis that the stress on the interested tissue is homogeneous, Hooks’s law relates the strain of tissue deformation with the Young’s modulus or the stiffness of the tissue. The strain of the tissue deformation is calculated by transmitting ultrasound energy into tissue, gathering the backscattering echo signals, and comparing the echo signals of series of frames undergoing continuous movements. The sensitivity of deformation detection is high enough that slight motion of tissue caused by external probe pushing or patient’s breathing can produce sufficient deformation to form the strain image.
Strain image is a qualitative imaging method, which means that the brightness of the image indicates the relative stiffness of the tissue. The ratio of the stiffness between the suspected lesion and normal tissue is semi-quantitative index which is more reliable to differentiate the malignant and benign tumor. Statistics on the Mindray DC-8 strain on 80 patient shows that there is high correlation between the malignance of the tumor and the high score of the measured strain ratio.
In sense of diagnosis, strain image is complement to routine B mode image, just like the Doppler mode image. It provides extra information that B- mode image can not reveal. For example, the harder part of the malignant tumor in strain image occupies bigger region than it does in normal B-image. Researches show that there is a boundary zone around the tumor which shows higher stiffness than the inner part of the tumor[4].
The real time free hand strain image has been furnished on Mindray DC-8 ultrasound diagnosis system. It provides high frame rate up to 16 frames per second along with competitive strain image. DC-8 strain image provides abundant elasticity information and clear boundary differentiation in tumor diagnosis. One of the clinic examples,  as seen below in Figure 1, the strain image of a breast tissue lesion with all blue color inside, reveals that its rigidity is much higher comparing to the surrounding normal tissues, indicating diagnosis suggestion of a malign breast cancer. 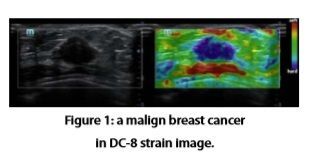 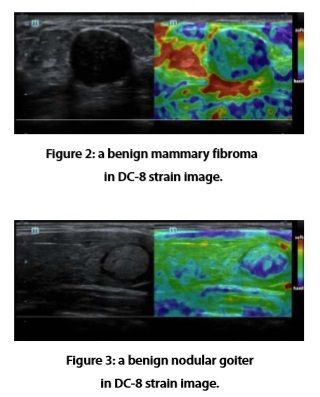 In DC-8 strain image system, stress and strain image quality index are combined together and displayed as continuous green bars below the image in times series to give guidance to new users. 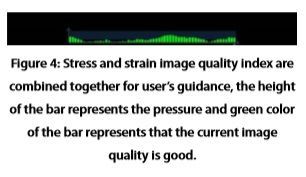 Also DC-8 strain image provides several functions of post-measurements. Strain ratio measurement quantitatively gives the ratio between the average strain of the selected region and of the nearby normal tissue region as shown in Figure 5, which is related to the ratio between average elasticity coefficients of two regions. 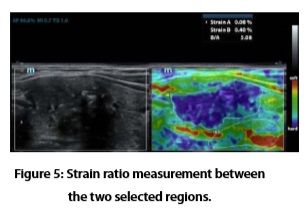 Strain histogram measurement gives the statistics of the strain inside the selected image region as shown in Figure 6 below. 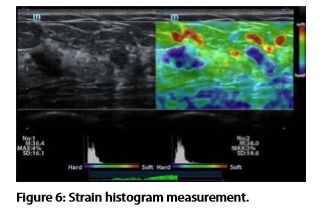 DC-8 strain image system provides a new examine method for extracting the elasticity information of the tissue for clinic ultrasound diagnoses. Along with DC-8’s high quality B mode image, it increases the reliability of clinic judgement for malignance of the tumor, especially in breast cancer diagnosis.

Elastography, Doppler, ultrasound diagnostic systems, Mindray Relationship between the stiffness of tumor and it’s malignance has far been known since the ancient Greek[1]. It’s until recent years that people bega...