Share
Download PDF
Two surveys on advanced radiography practice, presented at UKRC 2015 in Liverpool this week, provided a view of current work patterns in the UK.

Sue Rimes, principal radiographer, Taunton & Somerset NHS Foundation Trust, in a survey of CTC (computed tomography colonography) radiographers found that radiographers were most often responsible for carrying out the procedure, acquiring the image and caring for the patient. The radiologist’s role was most likely to be responsible for accepting referrals, reporting and providing advice. 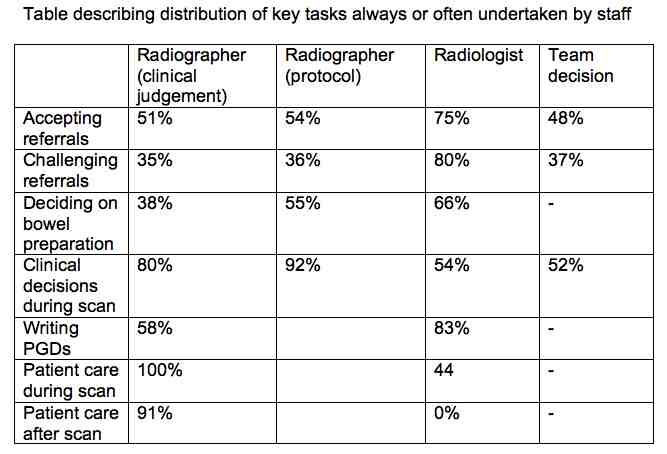 A radiologist independent report was most likely (40/56), and double radiologist reports were reported by 10/56. Most radiographers assess the lumen of the bowel in order to direct the procedure. One respondent offered a first read of extra luminal pathology, but non offered a final report.

The results showed that the size of hospital/ number of CTCs performed was not related to the service provided. CTC provision was limited by resources rather than the enthusiasm of staff. PGDs are used for IVCM and antispasmodic, but less often for bowel preparation and tagging.

Rimes noted that there was a disparity in grading for CT and GI specialists; CT radiographers in the survey did not have the same training opportunities as GI radiographers. She suggested that more radiographers could take on a lead role for providing this service, and that there was scope for national guidelines for radiography practice to support existing CTC guidance. Concluded Rimes, excellent practice exists to provide a radiographer led CTC service, offer radiographer reporting and minimise radiologist involvement. She rcommended that national guidance on the CTC radiographer role would expand this development, facilitate academic course provision, ensure standardised care and keep CTC within radiology.

199 respondents currently practised as reporting radiographers. Of these 64.8% were female, with a mean age of 43. 88.4% were Band 7 on the NHS scale. 45% of the female respondents worked part-time. 82.8% considered themselves to be advanced practitioners.

Contrast-enhanced spectral mammography is a technique used at the Nottingham City Hospital in the UK, and consultant radiologist... Read more

The British Institute of Radiology (BIR) issued the following statement in response to the Royal College of Radiologists’ national... Read more

Lung Ultrasound Safer Than Chest X-ray For Pneumonia in Children

Lung ultrasound is portable, less costly and safer than chest X-rays when diagnosing pneumonia in children, according to... Read more

Exceeding Expectations   Confronted with increasingly complex clinical requirements and rising numbers of patients, medical institutions are expected to perform at the limits of capacity every day. SOMATOM Definition Edge helps you not only meet,...