Share
Download PDF
A brain imaging study published in the journal Radiology reveals that stimulant drug abuse has long-term effects on brain volume in women. Researchers found that brain structures involved in learning, reward and executive control showed vast changes even after a prolonged period of abstinence from drug use.

The study, led by Jody Tanabe, MD, professor of radiology, vice chair of Research, and Neuroradiology Section Chief at the University of Colorado Denver School of Medicine, sought to determine how the brains of people previously dependent on stimulants differed from the brains of healthy people. Researchers analysed structural brain magnetic resonance imaging (MRI) exams in 127 men and women.

Participants included 59 people (28 women and 31 men) who were previously dependent on cocaine, amphetamines, and/or methamphetamine for an average of 15.7 years, and 68 healthy people (28 women and 40 men) who were similar in age and gender. The MRI results showed that after an average of 13.5 months of abstinence, women who were previously dependent on stimulants had significantly less grey matter volume in frontal, limbic and temporal regions of the brain. "“These brain areas are important for decision-making, emotion, reward processing and habit formation,” says Dr. Tanabe.

While the women previously dependent on stimulants demonstrated widespread brain differences when compared to their healthy control counterparts, Dr. Tanabe notes that the men showed no significant brain differences.

Dr. Tanabe and her team also examined how these brain volume differences were related to behaviours. They found that lower regional grey matter volumes correlated with behavioural tendencies to seek reward and novelty.

“Lower grey matter volumes in women who had been stimulant dependent were associated with more impulsivity, greater behavioural approach to reward, and also more severe drug use,” Dr. Tanabe explains. “In contrast, all men and healthy women did not show such correlations.”

The findings may provide a clue to the biological processes underlying the clinical course of stimulant abuse in men and women, according to Dr. Tanabe.
*  *  *  *  *  *  *  *  *
Top image. T1-weighted MR imaging examination of the brain with superimposed population-level T-value map shows significantly greater regional grey matter volume in female control subjects compared with male control subjects, after correction for age, brain size, and years of education. 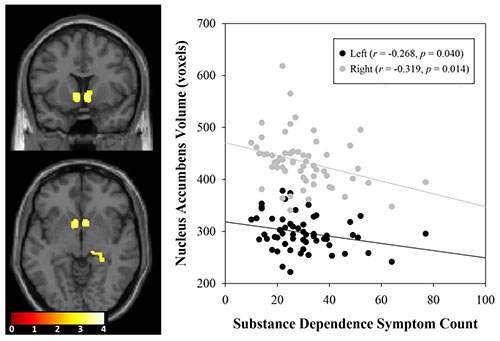 «« PET/CT Method Can Help Detect ‘Hardening’ of the Arteries

An imaging study shows that specific cardiovascular risk factors, such as alcohol use, smoking, obesity and diabetes, correlate... Read more

A new imaging tool has allowed Boston scientists to look inside the brain of an adult mouse at a scale previously unachievable,... Read more

Drive precision for all – with a Dual Source CT scanner   Regardless of the type of patient: Your medical imaging institution has to provide state-of-the-art CT imaging. At all times, you have to be able to aid your patients, to cope with your...