Share
Download PDF
An imaging study has identified cartilage regeneration in long-distance runners. Ultra-distance running places tremendous stress on the body and this research provides detailed information on how the various organ systems change and adapt in response to that stress, according to researchers, who used a mobile MRI truck to follow marathon runners for 4,500 kilometres through Europe.

MRI test results revealed that, with exception to the patellar joint, nearly all cartilage segments of knee, ankle and hind-foot joints showed a significant degradation within the first 1,500 to 2,500 km of the race.

"Interestingly, further testing indicated that ankle and foot cartilage have the ability to regenerate under ongoing endurance running," said Uwe Schütz, MD, Department of Diagnostic and Interventional Radiology at the University Hospital of Ulm in Germany. "The ability of cartilage to recover in the presence of loading impact has not been previously shown in humans. In general, we found no distance limit in running for the human joint cartilage in the lower extremities."

The findings were presented Monday, 30 November, at the annual meeting of the Radiological Society of North America (RSNA).

Study participants included 44 of the runners (66 percent) taking part in the Trans Europe Foot Race (TEFR) held from April 19 to June 21, 2009. The race entailed running 4,487 km starting in southern Italy and ending in the North Cape in Norway without any day of rest. The researchers used a 1.5 Tesla MRI scanner mounted on a mobile unit, the only one of its kind in Europe at that time. Each participant was scanned every three to four days, resulting in 15 to 17 MRI exams over the course of the race. The runners were also randomly assigned to additional examinations, and protocols were created for daily urine, blood and other tests.

Dr. Schütz's team also looked at how ultramarathon running affects brain volume. Baseline comparison of TEFR participants and controls revealed no significant differences in grey matter volume. At the end of the race, MRI of the brain revealed about a 6.1 percent loss of grey matter volume in the runners. After eight months, grey matter volume had returned to normal levels.

Although the finding on grey matter volume loss while running is astonishing, Dr. Schütz said, it is not cause for alarm.

"Despite substantial changes to brain composition during the catabolic stress of an ultramarathon, we found the differences to be reversible and adaptive," he explained. "There is no lasting brain injury in trained athletes participating in ultra-running."

The study has been awarded with the RSNA Country Presents Travel Award.

When and Where
Dr Schütz presents "The TEFR Field Study: Results of Continuous Biochemical and Morphological Cartilage Analysis of Hindfoot, Ankle, and Knee Joints in Course of a 4,500 km Ultramarathon Race throughout Whole Europe Using T2*-mapping on a Mobile MRI Truck Trailer" during the ISP: Musculoskeletal (Cartilage: Mechanics, Quantitative MRI and Repair) session, 10.30-12, E450B, Lakeside Level 4. 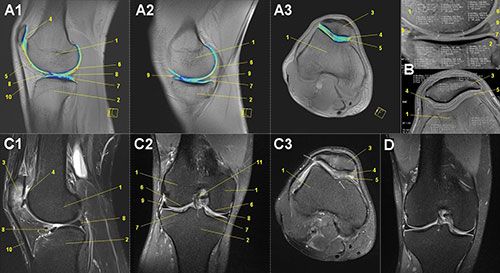 Researchers have developed software for the Microsoft Kinect gaming console that measures body-part thickness and checks for motion,... Read more

New research from China shows that children who have been left without direct parental care for extended periods of time have... Read more

An interventional radiology technique may be effective in treating obesity, according to the preliminary results of a study presented... Read more