Share
Download PDF
Significant cardiovascular changes occur in divers who hold their breath while descending hundreds of feet below the surface of the ocean, according to a new study presented on Tuesday, 1 December, at the annual meeting of the Radiological Society of North America (RSNA). These changes can pose potential dangers, particularly to inexperienced or cardiac untrained divers.

Apnoea is the temporary suspension of breathing. Free or apnoea diving has gained increasing popularity as a recreational sport activity and performance of apnoea divers has been constantly rising in the recent years. The sport can be dangerous because divers must hold their breath for prolonged periods while undergoing massive water pressure and physiological changes.

Researchers at the University of Bonn in Germany used MRI to study the simulated effects of free diving on the cardiovascular systems of 17 elite free divers from Germany and Austria (ages 23 to 58). To study the effects of a lack of oxygen on heart function and blood flow, respectively, the divers underwent cardiac MRI and MRI of the carotid arteries before, during and after a maximum breath hold.

The average apnoea was 299 seconds (just under five minutes) and 279 seconds or about four and a half minutes for the first and second MRI exams, respectively. The maximum breath hold (or apnoea) during the exams was eight minutes and three seconds.

When submerged underwater without access to oxygen, the body responds with what is called "diving reflex," which includes a decreased heart rate, a constriction of blood vessels in the extremities, and a shift in blood flow from the extremities to the brain. As oxygenated blood is diverted from the rest of the body to the brain, blood pressure increases.

Through the MRI exams, the researchers were able to observe the cardiovascular changes involved in the diving reflex in real time. During apnoea, the amount of blood flowing to the brain through the carotid arteries increased and then levelled off.

"As a recreational activity, free diving could be harmful for someone who has heart or other medical conditions and is not well trained for the activity," said one of the study's leaders, Lars Eichhorn, MD, from the Department of Anaesthesiology and Intensive Care Medicine at the University Hospital of Bonn. 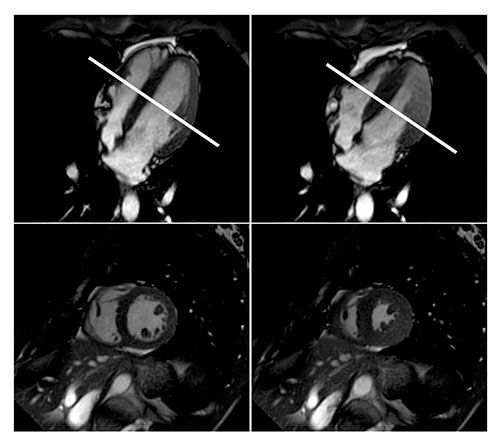 Figure 1. Cardiac MRI showing normal left ventricular function in the standard horizontal long axis (upper two images) and with corresponding short axis (lower two images) in diastole — the period during which the ventricles are filling and relaxing (left) — and systole — the phase of the heartbeat when the heart muscle contracts and pumps blood from the chambers into the arteries (right) — at the mid ventricular section of the heart (white line).

«« RSNA15: Getting to the Heart of Archaeology

healthmanagement, #RSNA15, RSNA 2015, apnoea, heart failure, diving, cardiovascular Significant cardiovascular changes occur in divers who hold their breath while descending hundreds of feet below the surface of the ocean, according to a new study. These changes can pose potential dangers, particularly to inexperienced or cardiac untrain