Concussion affects cognitive function and quality of life in some individuals. It usually takes three months for MTBI patients to have a full recovery. Some 10-15 percent of MTBI patients, however, experience persistent disabling problems even after three months. These problems can include post-traumatic headache, sleep disturbance, memory and other cognitive impairments, loss of balance, fatigue, and mood or affective disorders.

The lasting effects of concussion have caused growing concern in recent years, especially among amateur and professional athletes and sports organisations. According to some reports, female athletes suffer concussions at a higher rate than male athletes playing similar sports.

“We started to wonder whether there might be differences in MTBI outcomes between men and women,” said Dr. Chen, who is also superintendent at Chia-Yi Hospital in Taiwan. He and colleagues decided to examine gender differences in MTBI by using functional magnetic resonance imaging (fMRI) to analyse brain activation patterns during working memory tasks.

Dr. Chen's team studied 30 patients with MTBI and 30 control patients (both groups with an equal number of men and women). Patients underwent an fMRI exam within one month after injury and a follow-up fMRI exam at six weeks after first scan. In addition, participants underwent neuropsychological tests, including digit span and continuous performance test (CPT). Digit span is a short-term memory test measuring how many numbers a participant can remember in sequence. CPT measures a person’s sustained and selective attention and impulsivity.

The team reported these key findings: 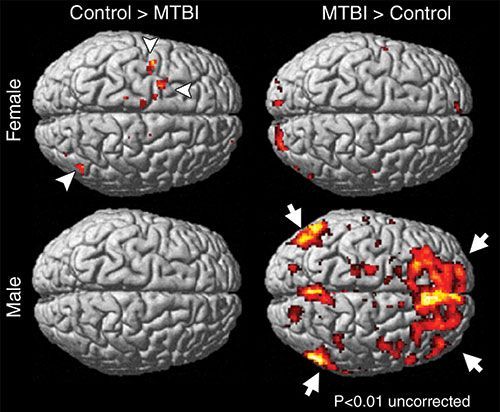 Blood Test for Brain Injury Could Cut Need for Scans

A simple blood test to measure brain-specific proteins released after a person suffers a traumatic brain injury (TBI) has been... Read more

A new MRI study published in the journal Radiology has found distinct injury patterns in the brains of people with concussion-related... Read more

Imaging Study Shows Spinal Cord Learns on Its Own

A groundbreaking imaging study published in PLOS Biology shows that the spinal cord engages in its own learning of motor tasks... Read more

Concussion, mTBI, fMRI, brain injury, memory, traumatic A new study published in Radiology indicates that women may have a more difficult time than men in recovering from concussion, also known as mild traumatic

Are you curious on how to balance diagnostic imaging, patient experience and cost ? Our newly released APERTO Lucent Plus Open MRI system provides an improved experience with easy access and soothing environment for all types of patients. The...

A COVID-19 vaccine centre has been set up at Dracula's castle in Transylvania. Read more

The verdict is in. Findings from the ISARIC CCP-UK (International Severe... Read more

In the wake of the Covid-19 pandemic, medical imaging methods are playing... Read more