Scientists in the U.S. added a collimator to an existing 3-D breast molecular imaging system that improved image quality in the contrast of cancer lesions in the breast and slashed the radiation dose to the patient by half.

The device, that narrows a beam of particles or waves to become more aligned in a specific direction may also allow for 3-D molecular breast images at higher resolution than current 2-D scans in a format that may be used alongside 3-D digital mammography.

Preliminary tests by researchers at the Department of Energy’s Thomas Jefferson National Accelerator Facility, Dilon Technologies and the University of Florida Department of Biomedical Engineering have demonstrated that the new device may enable existing breast cancer imagers to provide up to six times better contrast of tumours in the breast, while maintaining the same or better image quality and halving the radiation dose to patients. 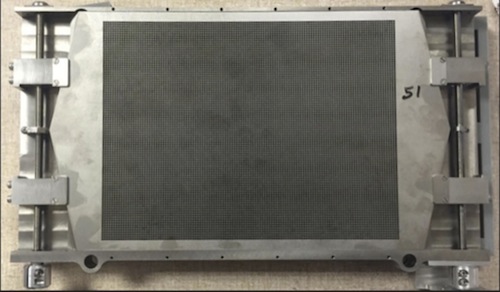 Adding this variable angle slant hole collimator to an existing breast molecular imaging system allows the system to get six times better contrast of cancer lesions in the breast, providing the same or better image quality while also potentially reducing the radiation dose to the patient by half. Technologies developed at DOE’s Jefferson Lab for the variable angle slant hole collimator are included in two filings to the US Patent and Trademark Office.

In breast cancer screening, mammography is the gold standard. But about half of all women who follow standard screening protocol for ten years will receive a false-positive result that will require additional screening, particularly women who have dense breast tissue. Used in conjunction with mammography, imaging based on nuclear medicine is currently being used as a successful secondary screening alongside mammography to reduce the number of false positive results in women with dense breasts and at higher risk for developing breast cancer.

Now, researchers are hoping to improve this imaging technique, known as molecular breast imaging or breast specific gamma imaging, with better image quality and precise location (depth information) within the breast, while reducing the amount of radiation dose to the patient for these procedures.

According to Drew Weisenberger, leader of the Jefferson Lab Radiation Detector and Imaging Group, a new device called a variable angle slant hole collimator provides all of these benefits and more.

“These results really focus on the breast. We hope to build on this to perhaps improve the imaging of other organs,” Weisenberger said.

While a mammogram uses X-rays to show the structure of breast tissue, molecular breast imagers show tissue function. For instance, cancer tumours are fast growing, so they gobble up certain compounds more rapidly that healthy tissue.

Current molecular breast imaging systems use a traditional collimator, which is essentially a rectangular plate of dense metal with a grid of holes, to “filter” the gamma rays for the camera. The collimator only allows the system to pick up the gamma rays that come straight out of the breast, through the holes of collimator, and into the imager. This provides for a clear, well-defined image of any cancer tumors.

The variable angle slant hole collimator, or VASH collimator, is constructed from a stack of 49 tungsten sheets, each one a quarter of a millimeter thick and containing an identical array of square holes. The sheets are stacked like a deck of cards, with angled edges on two sides. The angle of the array of square holes in the stack can be easily slanted by two small motors that slide the individual sheets by their edges. The result is a systematic varying of the focusing angle of the collimator during the imaging procedure.

JMIRS: Many Still Not Fully Aware of Dose Risk from CT Scans

A survey of about 300 healthcare professionals in Canada found that radiologists and technologists generally had better... Read more

Radiologists Need to Embrace the Unknown

According to a recent editorial published in the Journal of the American College of Radiology, radiology educators need to stop... Read more

The European Society of Radiology (ESR) has committed to strengthen its efforts in Latin America in 2016 and increase the involvement... Read more