Explainer videos as a communication tool.

Whether you want to teach staff, motivate them, alter their perceptions, or simply share an idea, animated video is an engaging and memorable approach.
The introduction and evolution of innovative ways to represent concepts and topics via animated video have vitalised the learning environment, and these continue to develop. Not only technological advancements but psychology and neurology research are opening new avenues. Striking visuals, illuminating sounds, inspiring music, text and narration accompanied by well-structured content appeals to a variety of different learning types. Animated videos are also perfect for expressing ideas quickly while content that activates an emotional response is memorable. A popular use of animations is to show things that can’t be shown easily in real life, such as dynamic content and the interaction of invisible phenomena. From illustrating the performance of cells in a disease to showing the benefits of a computer programme, anything can be simulated in an animated video. There are many types of animations. Lowe (2003) identified three sorts of animation: transformations, in which the properties of objects such as size, shape and colour alter; translation, in which objects move from one location to another; and transitions, in which objects disappear or appear.
You might also like: How can quality improvement be learned in bite sizes?

The science of learning with animation

Many different factors can influence the way people learn with animations and the success of any particular application will depend upon the interaction of many different factors (Ainsworth 2008). Ainsworth suggests that there are six levels to understanding learning through animation: expressive; cognitive, motor and perceptual; affective and motivational; strategic; metacognitive; and rhetorical.

There are many ambiguities to consider with expressiveness, which if not considered can affect the way an animation is interpreted. They should not be overly abstract. Expressiveness also looks at the need to represent actions in a specific sequence in order for them to be properly interpreted. This is usually great, but can be problematic if the dynamic activity being represented involves separate, often overlapping sequences.

According to Ainsworth, an analysis of the perceptual, motor and cognitive aspects of learning with animation indicated that while animation might make dynamic information clearer, reducing the amount of cognitive effort needed, it could introduce problems—the short-lived nature of perceptual processing and memory can become a barrier, so supporting animation with other tools could be useful.

Motivational and affective descriptions of learning with animation propose that some learners report a boost in motivation after being exposed to animation, reports Ainsworth.

The strategies which students use when learning with animation are key to their essential understanding. The indication is that more experienced learners find it easier to study with animation.

Ainsworth suggests that there is limited evidence to suggest that animation helps learners to achieve effective metacognition, so again it is important to support animation with other methods.

By using animation as an educational device, we are acknowledging the brain’s limbic system’s inextricable link with emotion, memory, attention, drive and learning. Emotional responses affect attention and memory and are intricately linked to whether or not we act on information. Research has shown that the emotional area of the brain is linked to the cortical areas where cognitive learning occurs (Goleman 2010). Far more neural fibres project from our brain's emotional centre into the logical/rational centres than the reverse, so emotion is often a more powerful determinant of our behaviour than our brain's logical/rational processes (Hayes et al, 2015). In his research on how animations influence learning, Ainsworth (2008) highlights that one positive emotion that has been linked to increased learning is that of flow (Csikszentmihalyi 1990). Flow is considered to be the mental state in which people are fully immersed in whatever they are doing, and is characterised by a feeling of energised focus, full involvement, and success in the process of the activity—ie, a pleasurable emotional state.
Your animated explainer video might include humour, adventure or just be a happy story. To achieve the desired emotional response, thought needs to go into all areas from the storyboard to characters to voiceover. Animated agents—characters that show enthusiasm and useful gestures—have become very popular in educational animations. A friendly or recognisable voiceover can also make a lot of difference to an animated video’s appeal.
The desire to learn and progress in a certain area or organisation is another relevant part of the limbic system. Just the production of animated videos may motivate employees as they see that they are valued, which appeals to their feelings of worth and can improve attitude. If in the animated story you recognise exactly the issues and challenges involved in their jobs, you could enhance their respect for management and raise morale. The content of the animated explainer video should reinforce these values. There is plenty of empirical evidence that people will choose animations when provided with learning environments that include them, found Ainsworth (2008). 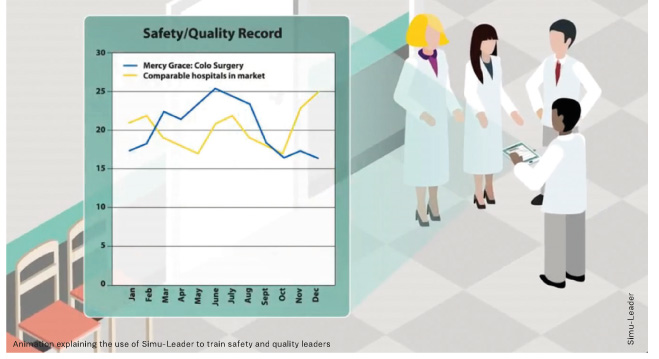 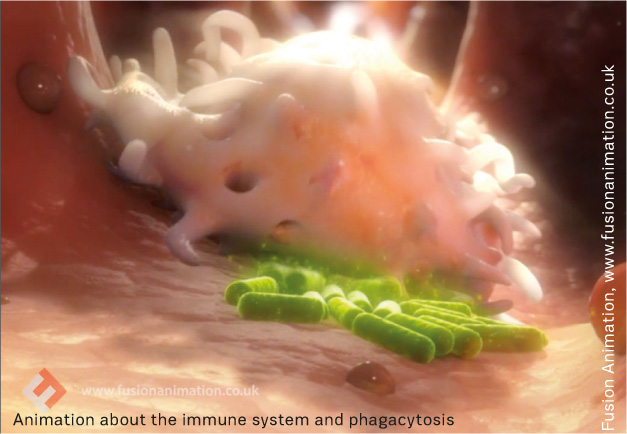 The most important element about any communicational content is that the target audience engages in it. According to Web Marketing Group (n.d.), 90% of information transmitted to the brain is visual, and visuals are processed 60,000 times faster in the brain than text. Findings also show that 40% of people respond better to visual information than plain text. Furthermore, The State of Video in Education 2015: A Kaltura Report (Kaltura 2015) found that 66% of higher education institutions use a variety of video for remote teaching. It’s clear that making learning within your hospital, ward or clinic more enjoyable makes it more gratifying and effective, and the desired outcome is more likely to occur. One thing that is now widely accepted is that accompanying animated images with narration rather than text is more effective (Ainsworth 2008).

What your animated video can achieve

Have you considered using animated video to present corporate policy guidelines, or even monthly newsletters? How about as a tool in staff training programmes? The key for any animation is to have a clear objective in mind. This will involve a lot of decisions regarding the script, illustrations, animation technique, the length of the video and style. Popular uses of internal communications animations include:
Animation’s potential for storytelling can help achieve many of these objectives, since placing information within engaging stories is a great way to encourage people to retain facts. A story can also help employees to identify with the organisation, its values, culture and objectives and the direction it is taking.

The best choice of animation technique will often depend on the purpose of the video. The Royal Society for the encouragement of Arts, Manufactures and Commerce (RSA) was the first to successfully apply whiteboard animation in a way that explains complex ideas clearly, and its use has since skyrocketed. You have probably come across some of these yourself—usually identified by the presence of an illustrative hand which draws pictures on a whiteboard-like screen to guide the viewer through images which illustrate the audible narrative. Infographics can be included to provide more detail in a structured way. This makes a concept easy to follow and avoids overwhelming the audience. Whiteboard video is a popular way to share a lot of complex information in a short space of time.
Animation is exceptionally versatile, and does not restrict imagination. For example, the image of a huge puffing rain cloud to represent cloud storage could form part of an entertaining story and make a complex explanation far more interesting and memorable. The cloud could also form part of an infographic, with an affable animated character leading viewers through the topic. Likeable characters that employees can relate to will rouse positive emotions.
Other useful techniques for clarifying concepts are split screens and time lapses. Animations can be valuable for presenting dynamic content, including changes over time. You can also include some live-action footage within your video.
If you opt for a series of videos, it can be a great idea to harmonise them in some way, such as by including the same characters and voiceovers in each, so that employees feel a sense of familiarity as they watch them.

Motion graphics are fantastic for storytelling, but a lesser known benefit are their potential to describe detailed concepts that are difficult to explain via text or real-life demonstration. A medical procedure can be explained with audio and animated images, with organs shown clearly. Even cells and their interaction can be explained concisely. It enables the audience to actually see what happens in an easy-to-follow manner. Animation can expand or minimise things when needed and provide a 360 degree view. Specific functions and changes can be shown simply and clearly. This facilitates quick understanding and is usually less tedious than learning through reading text. An area where animation has been extensively studied is algorithm animation (a dynamic visualisation of a programme's data, operations, and semantics). Kehoe et al. (2001) reported that students typically respond positively that they are “relaxed, more confident in their knowledge and more open to learning.”
When it comes to explaining new processes and policies at work, creating animated characters that represent each role (or even employee, if your company is small) is an effective and fun approach. Staff can even be presented as superheroes. If your internal communications explainer video is enjoyable, staff will discuss it between themselves, improving retention. No doubt there are some quirky and inspiring children’s cartoons that have never left your mind which you could use as inspiration. 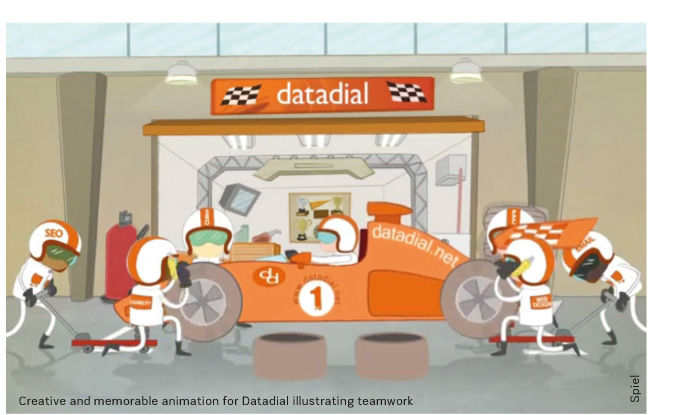 Presenting and sharing your video

The manner and location in which your audience view your video may depend on its purpose. They could be shown first in an office environment without distractions to minimise cognitive load and improve employees’ ability to process the video’s content; then they might be placed on a video-sharing site like Vimeo to be shared in social media or distributed via email. If employees have access to the video on their computers and mobile phones, they can watch it again and again and increase their level of understanding if needed. A Cisco study found that by 2021, as much as 82% of consumer internet traffic will be devoted to watching video; up from 73% in 2016 (Cisco 2017). Furthermore, online video viewing on mobile devices has been expected to take over desktop viewing.

No doubt there are also many more ways you can make use of this innovative tool. Just assess your objectives, explore animation’s potential, and use your imagination so that your video is informative as well as memorable. Support the concepts taught via your animated video with other educational methods such as detailed documents, presentations and other uses of multimedia and you are likely to achieve great success.

Embrace human nature at 3T   MAGNETOM Vida – the first 3T MRI scanner with  BioMatrix Technology  – embraces human nature and the unique set of challenges that each patient brings to the MRI exam. By embracing these challenges, we overcome patient...

Early detection and optimal diagnostic accuracy play a crucial role in mammography screening. Accomplishing this, however, requires a highly standardized workflow and high-quality images. At the same time patient experience should also stay in focus....

Mammography screening entails examining thousands of healthy women. So keeping dose as low as possible is extremely important and high image quality is the key to detecting the smallest detail. MAMMOMAT Inspiration results...