Share
Download PDF
Sepsis has become a leading cause of in-hospital death and new research findings may help explain why this is so. A significant number of patients with suspected sepsis do not have their lactates measured within the recommended timeframe and, as a result, they experience delayed antibiotic therapy and IV fluid administration, as well as increased risk of in-hospital death, according to a study in the journal CHEST®.
"Sepsis continues to be a major public health problem in the U.S., one with persistently high mortality despite continued efforts to improve care. Our goal with this study was to better understand, on a more granular level, how sepsis bundles affect the patients we apply them to," said first author Xuan (Susan) Han, MD, Department of Medicine, University of Chicago, Chicago, IL.
The Centers for Medicare and Medicaid Services (CMS) in 2015 issued protocols known as care bundles to standardise and improve sepsis care. The guidelines, known as SEP-1 (Severe Sepsis and Septic Shock Early Management Bundle), recommend the measurement of serum lactate between six hours before and three hours after severe sepsis presentation, followed by a repeat within six hours of presentation if the initial lactate is elevated.
"Patients with early lactate measurements received earlier interventions such as antibiotic administration, which is known to improve mortality in sepsis," explained co-author Matthew M. Churpek, MD, MPH, PhD, of the Department of Medicine and Center for Healthcare Delivery, Science and Innovation at UChicago.
The researchers reviewed the records of close to 150,000 patients admitted to a single tertiary care academic hospital from November 2008 to January 2016. Information regarding each patient's characteristics, vital signs, laboratory measurements, and medical therapy was analysed. There was a particular focus on lactate measurements and levels.
In all, 5,762 admissions met the three SEP-1 criteria for severe sepsis within a six-hour period. Of these, only 60 percent had an initial lactate drawn within the SEP-1 specified timeframe. Fourteen percent had their levels measured between three and 24 hours after the time of first suspicion of sepsis ("delayed lactates"), and more than one quarter had no lactate measurements at all.
This is an interesting finding of the study: a majority of patients (79 percent) treated in the emergency department had lactate levels measured within the specified time period, compared with 55 percent in the intensive care unit (ICU) and only 32 percent in hospital wards.
Data showed that mortality increased with higher initial lactate levels. For example, in the ICU, the mortality rate was 35 percent for patients with a normal initial lactate level compared with 62 percent for those with elevated lactate levels. Most troubling, in patients with elevated lactate levels at the first draw, each hour of delay was associated with a two percent increase in the odds of in-hospital death. 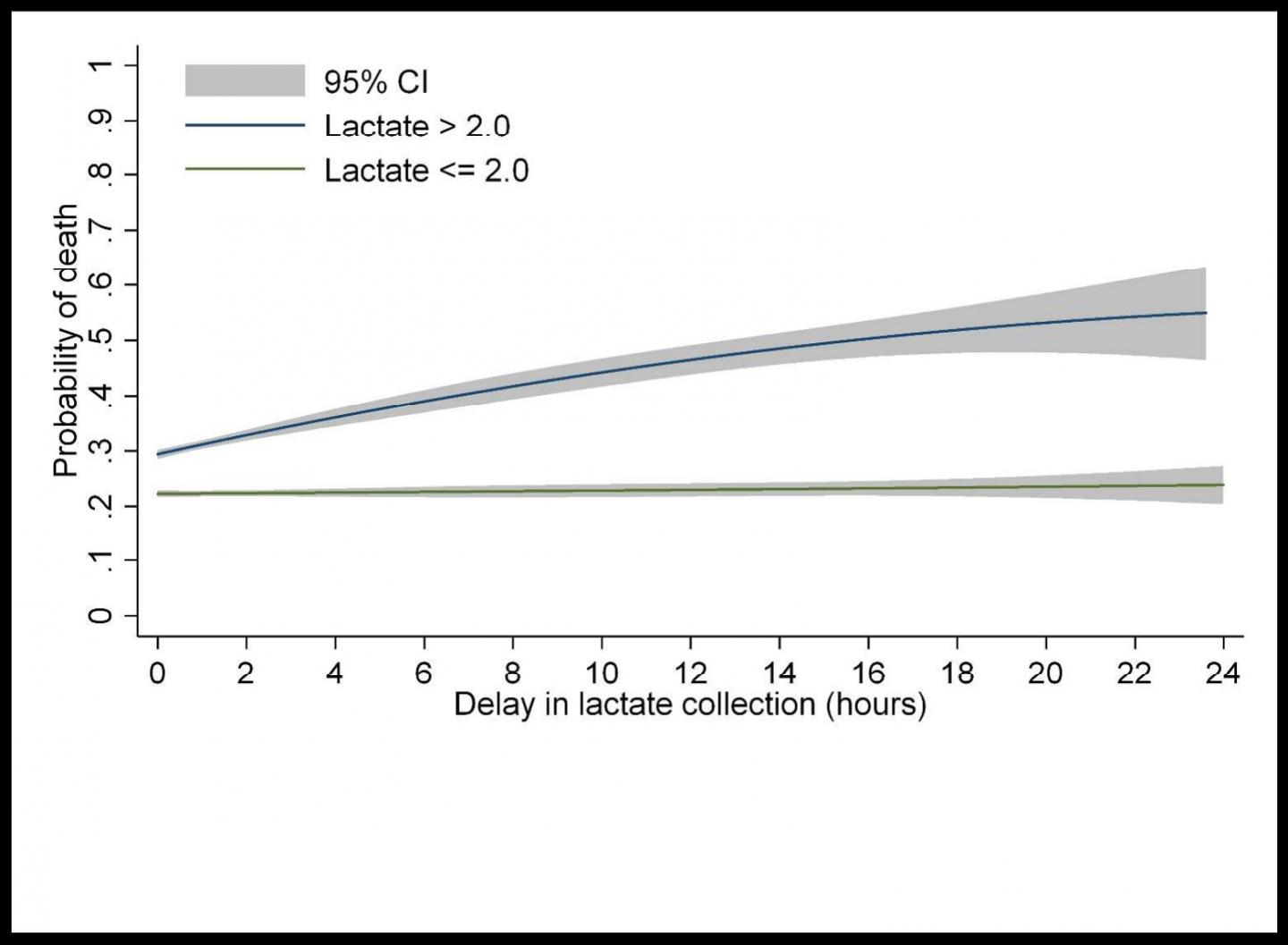 "This study better characterised the patients affected by SEP-1, as well as the impact of one component of SEP-1, lactate measurement, on hospitalised patients," Dr. Churpek said. "Systematic early lactate measurements when a patient presents with sepsis may thus be useful in prompting earlier, potentially life-saving interventions."
Source: CHEST
Image Credit: Gospel for Asia

Understanding the mechanisms of sepsis is key to effective treatment

Sepsis is a leading cause of intensive care unit (ICU) admission in older patients. Currently, however, the only therapies... Read more

The incidence of sepsis – a condition that is associated with high morbidity and mortality – seems to be increasing. Early... Read more

Sepsis, In-Hospital Death, antibiotic therapy, IV fluid administration Sepsis has become a leading cause of in-hospital death and new research findings may help explain why this is so. A significant number of patients with suspected sepsis do not have their lactates measured within the recommended timeframe and, as a result,

The technical and clinical reference standard for all B·R·A·H·M·S PCT assays. All clinical cut-offs and algorithms were developed based on B·R·A·H·M·S PCT sensitive KRYPTOR.   Homogeneous immunoassay for the quantit

People across the world heaved a sigh of relief when the first COVID-19... Read more