Share
Download PDF
Dr. Matthieu Komorowski, Consultant in Intensive Care and Machine Learning researcher at Imperial College, London, talked about critical care in space at the 39th International Symposium on Intensive Care and Emergency Medicine.
One of the most distinct features about his talk (apart from the fact that it was about space), was that instead of presenting a lecture on space medicine, he narrated a story. The story is set in 2030 and the audience, along with Dr. Komorowski, followed the first man’s mission to Mars. Six men were selected to be part of the mission -  the best of the best and the fittest of the fittest. The team of six included two Americans, three Russians and one Dutch citizen. The Dutch, Andres Coopers, was the physician in the team and also the main protagonist of Dr. Komorowski’s story.
Dr. Komorowski highlighted some of the key challenges that the space team would face while in Mars. He pointed out that the current mission design from NASA is built around a 900-day mission with 200 days in transit each way and 500 days on the surface. He discussed some of the key aspects that should be addressed at the very beginning: how do you select the right people for a mission like this? How do you make sure that they function as individuals but also as a team for such an extended period of time in such an extreme environment? What about onboard medical skills? Who do you need to have medical capabilities? What about skill redundancies? What do you do if the doctor becomes the patient or if he dies? What about the medical kit since restrictions in terms of volume and weight are absolutely drastic in space travel? It is also impossible to evacuate, and there is no option of real-time communication since Mars and Earth are so far from each other.
Also, because the mission will be so long, from a mathematical point of view, the risk of severe medical events will also be higher. Dr. Komorowski explained that some people have tried to produce estimates using analog populations and they have come up with a number of at least one event requiring anaesthaesia or invasive surgery. Among other medical risks include exposure to radiation. In such  a mission, you might be exposed to 1 Sv or more. That’s about 100 chest x-rays a day. Bone loss is another problem, and that is why astronauts are at risk of osteoporotic fractures within six months of space travel. There is also the issue of psychiatric conditions. Some missions have had to be shortened because of a nervous breakdown. Also, there is the problem of cardiovascular deconditioning. How do you make sure people are fit for surface activities when they land? How do you deal with trauma or surgical emergencies in space? How do you provide anaesthesia and post-surgical care?
Finally, Dr. Komorowski discussed one of the most talked about topics in critical care – sepsis. What happens if someone develops sepsis in space? He then used the example of Andres who had just got pneumonia  and was on antibiotics. But as Dr. Komorowski highlighted, the risk of infection increases in space because the immune system is depressed, new bacteria can spontaneously appear in space, and maybe radiation could be at play here. Also, astronauts in space function in a very contained environment. The air circulates continuously; particles float in the cabin that the astronauts breathe in and which can potentially be contaminated. These factors increase the risk of infection. 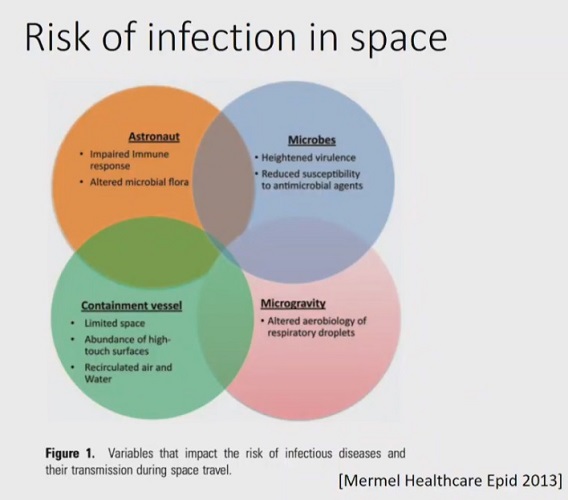 They do have medical kits in space but are the contents sufficient? Dr. Komorowski believes that something along the lines of an oxygen concentrator may be a more viable option for a mission to Mars. Also, one medical kit in space has around 4 to 5 litres of sodium chloride, if you wanted to give IV fluids to patients. Again, is this enough? Sending 1kg into the orbit could be very costly, so obviously, you can't supply very often.Then there is the drugs pack with about 190 medications, most of them tablets and very little in the form of IV drugs. There is nothing that would allow the team to do any serious anaesthesia or intensive care. Hence, the medical kit would definitely have to be redesigned for Mars. 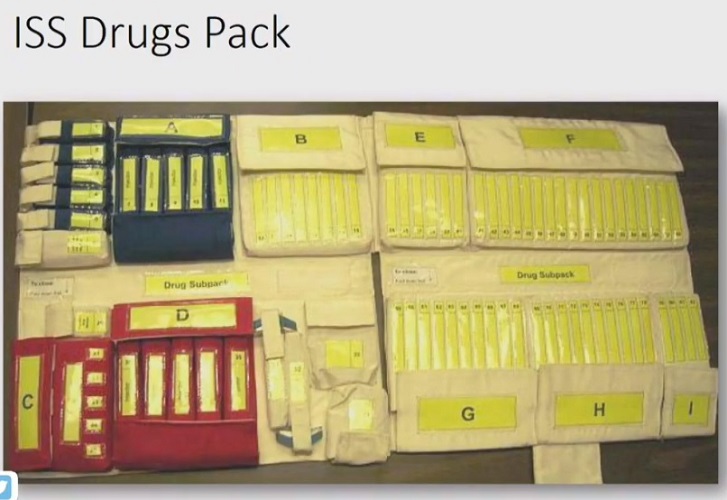 Drug stability is also impaired in space. An experiment was conducted a few years ago where they sent antibiotics in space for up to 900 days and compared what the remaining active substance was after space flight. They found that all the drugs that were flown were less potent. Hence, if we go back to the story and if Andres gets antibiotics, there is a very good chance that they weren’t potent enough to work or maybe the germ is new and resistant. In any case, things get worse for him, and he develops sepsis.
As Dr. Komorowski points out, one of the problems with developing sepsis in space is that your cardiovascular system is not at baseline. Being exposed to weightlessness basically resets the whole cardiovascular system at a different set point that matches the loading condition. The loss of the stimulus induced by standing up for e.g., has drastic consequences. These are some of the factors that have actually been measured in space – the systolic function, the diastolic function, the bowel reflex, the red blood cells mass, etc. All these levels are considerably down in space, and this would be of concern even on Earth if the patient was to be put to sleep or if he were to suffer additional blood loss or sepsis. And this is a serious problem. The effect of weightlessness on the cardiovascular system is so strong that after 6 months in space, over 80% of astronauts are not able to stand up properly.
Hence, it is clear that Andres needs a medical facility. But there is no such thing in space. There are no IV bags to give IV fluids, so a prototype has been designed  to generate IV fluids from drinking water. Therefore, they might have IV fluids on Mars or on the way to Mars. But again, how do you give fluids in space? It’s definitely not easy since there is no gravity. There are options, but they are not very effective. In simple words, things get worse for Andre. He is in respiratory distress; 84% saturation, still hypotensive. If he was on earth, clinicians would intubate him but what about in space? There is an intubation kit but again, it’s nothing fancy, and there’s only so much you can do with it. Also, Andres was the only doctor in the crew so what should the team do now? How would a nonmedical doctor do this? 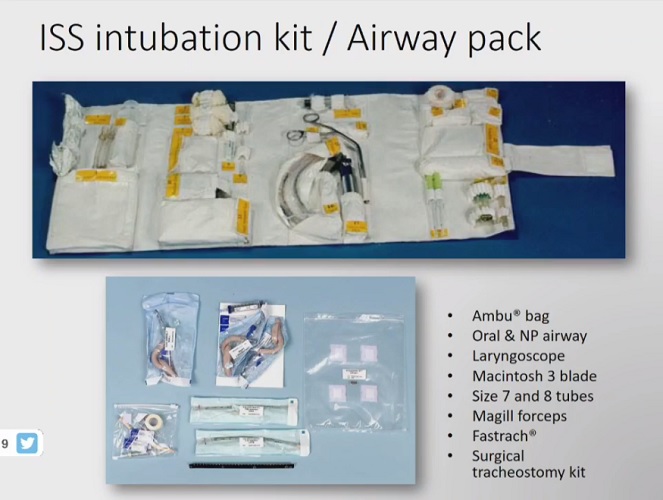 Dr. Komorowski talked about an ethical difficulty here because if the team decides to treat Andres, there will be so many consumables that there is a risk that the chances of survival for the rest of the crew for the rest of the missions would be impaired. It is important to discuss options such as suboptimal treatment and even palliation.
If you look at the entire story and how the events have unfolded, it becomes clear that the chances of patient survival, in this case, are very low. The most likely outcome is that Andres would die and his body would be dumped in space. Hence, critical care in space is extremely challenging. Things could easily go from bad to worse very quickly, even more so, if the patient is the only doctor in the team. Something to think about, isn’t it? Definitely, a very very interesting presentation from Dr. Komorowski.
Source: Dr. Matthieu Komorowski's live presentation at #ISICEM19 covered by ICU Management & Practice
Image Credit: Dr. Matthieu Komorowski's live presentation slides

In a large cohort study of 55,038 adults hospitalised with sepsis, short-term mortality (death or hospice) was lower in overweight... Read more

Sepsis remains the most common cause of vasodilatory shock worldwide. The mainstay of haemodynamic treatment of septic shock... Read more