COVID-19: From Hydroxychloroquine to Plasma Administration

Share
Download PDF
A number of colleagues and friends from outside the hospital have asked me whether they should take hydroxychloroquine for their COVID-19. A friend asked me whether he should take lopinavir-ritonavir even though he is not HIV-positive. A hospitalised patient requested administration of remdesivir regardless of the cost involved, and another patient even requested transfer to another hospital to receive the tocizilumab that she had heard about, but that we did not want to prescribe in the absence of a recognised indication. These drug names and miraculous cures are widely discussed on social media and various internet sites, which seem to take precedence over scientific publications! Nevertheless, it is easy to understand an individual’s frustrations when faced with such a potentially serious illness and no effective therapy.
Faced with this pandemic, everyone is of course, trying to find a treatment. A large number of studies are currently ongoing, involving more than 60 drugs. Table 1 is only a partial list. 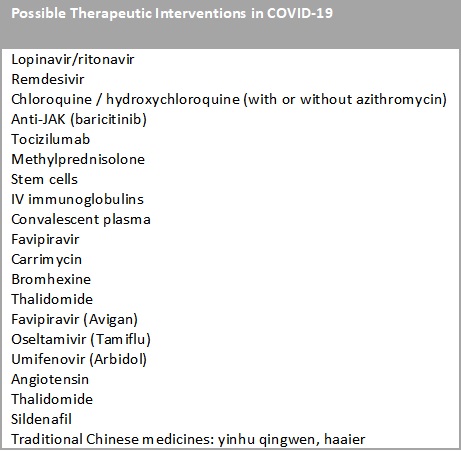 The topic of hydroxychloroquine is particularly hot for two reasons: the first is that the drug is cheap, can be obtained quite easily, and seems “safe” because it has been widely used for many years in the prevention of malaria. The second reason is that its administration was promoted by Professor Didier Raoult, an internationally recognised expert who can be very convincing when he appears on screen. However, his clinical data are unconvincing: the “famous” study included only 26 patients and had serious methodological problems, the principal one being exclusion from analysis of six patients in the treated group who did not improve. Current recommendations are, therefore, to reserve administration of hydroxychloroquine in the hospital to severely ill patients receiving cardiac monitoring.

The results of a study on lopinavir-ritonavir were recently published in the New England Journal of Medicine. Interpretation of the data is difficult. The conclusion of the manuscript states no significant difference with treatment, but the data did show some benefit, including a decrease in mortality from 25 to 19% in the treated group. We also give this medication in severe cases in the hospital. Remdesivir, an anti-viral agent developed against Ebola, is more promising. It prevents the replication of viral RNA in the laboratory. Remdesivir was administered to some American patients from the famous cruise ship in Japan, possibly with some success. The FDA has just authorised the introduction of this drug in the US but in the category of drugs for orphan diseases (is COVID-19 so rare?) so that it will be very costly. From the many possible therapies under investigation, some people would like to select one, or even several in a sort of cocktail. Some Chinese colleagues warmly recommend the use of Chinese herbs, considering that they were an effective treatment contributing to control the infection in China. Extracorporeal purification techniques have also been proposed in severe cases, and a small Chinese study gave promising results.
The search for a new effective therapy requires the appropriate clinical trials, i.e., prospective, randomised, controlled trials comparing treatment and control groups. Unfortunately, there has been little coordination or collaboration in the way in which such trials are being conducted worldwide. There are some large studies, for example, Discovery in France or SOLIDARITY (World Health Organization), aimed at randomising patients to several possible treatment options, using an adaptive design.
It is difficult not to take any medication. The use of ibuprofen and other anti-inflammatory agents for fever is controversial. Even the use of paracetamol may not always be a good idea, because fever can have a protective effect.
The most exciting news over recent days is the very initial promising data on the effects of administration of plasma from convalescent patients to those who are critically ill. The technique is quite an old method and has been used effectively in previous viral outbreaks, including Ebola, and is thus an attractive approach. While awaiting larger trial results, the FDA has approved its use for single patients with serious or immediately life-threatening COVID-19 infections. Let us hope that this new therapeutic strategy will be shown to be successful - rapidly.

The world is currently going through a major healthcare crisis. The COVID-19 pandemic has affected people across different continents,... Read more

COVID-19, #Coronavirusoutbreak, plasma administration A number of colleagues and friends from outside the hospital have asked me whether they should take hydroxychloroquine for their COVID-19. A friend asked