1 in 7 Sepsis Patients Readmitted within 30 Days

Share
Download PDF
Readmissions due to sepsis are higher and costlier than for the four conditions already reported in the U.S. to measure quality of care and guide pay for performance, according to researchers from the University of Pittsburgh School of Medicine and VA Pittsburgh Healthcare System. Their research is published in JAMA to coincide with the presentation of the findings at the Society of Critical Care Medicine’s 46th Critical Care Congress, meeting in Hawaii. In their congress abstract, the authors report that one of seven patients with an index hospitalisation for sepsis is readmitted within 30 days, resulting in excess costs of almost 1.5 billion dollars annually.

This really puts in perspective how important sepsis is," commented lead author Florian B. Mayr, MD, MPH, faculty member in Pitt's Department of Critical Care Medicine and the Center for Health Equity Research and Promotion at the VA Pittsburgh, in a media release. "If we, as a nation, place such high emphasis on reducing readmissions for the other four conditions, then we really need to look for opportunities to improve outcomes for sepsis, which has a higher rate of readmission than heart failure. People who survive an initial episode of sepsis often don't do well. They return to the hospital frequently, accrue new health conditions and have significantly elevated death rates."


The authors suggest that adding sepsis to the CMS’ Hospital Readmission Reduction Program may prompt development of new interventions to improve sepsis outcomes and reduce unplanned readmissions and associated costs.  In an email to ICU Management & Practice, Drs Yende and Mayr noted that CMS has developed a core sepsis measure (SEP-1), and policy makers are aware of the importance of sepsis as an issue for the healthcare system. 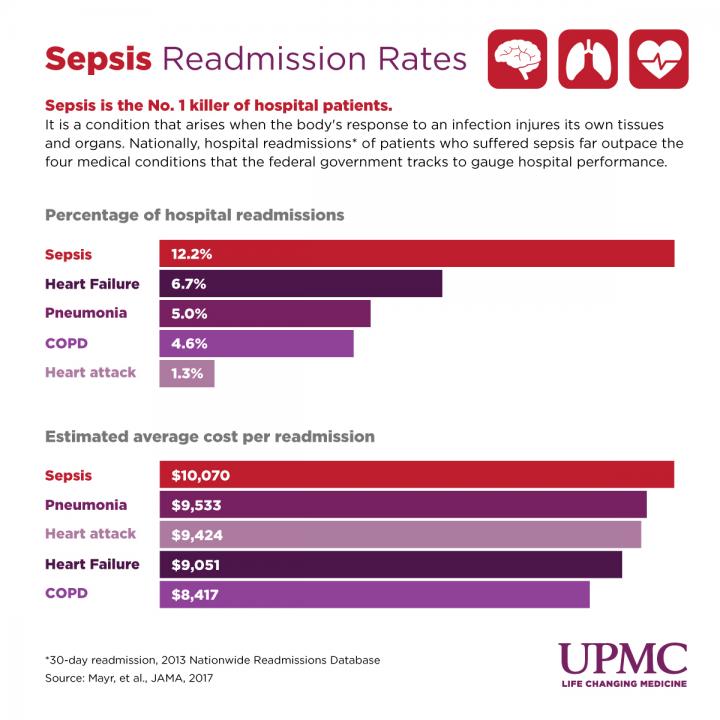 New Strategy for Identifying Sepsis Arising in the ICU

Study: ICU May Be Overused for Some COPD, Acute MI, HF Patients

For patients with COPD, heart failure and myocardial infarction, who are not critically ill, a stay in the ICU may be no more... Read more

The Importance of Correctly Identifying Patients with Sepsis

An Editorial in the journal Chest emphasises the need to develop highly accurate, flexible methods for identifying patients with... Read more

Sepsis, COPD, Pneumonia, heart failure, acute myocardial infarction, hospital readmissions Readmissions due to sepsis are higher and costlier than for the four conditions already reported in the U.S. to measure quality of care and guide pay for p...