Do we need yet another standard operating procedure?

Variability in end-of-life care would seem to demand a standard operating procedure, but a roadmap towards harmonisation arguably would be easier to implement.

Mainly due to enormous pharmacological and technological innovation during the last decades, intensive care medicine can help patients survive, whose vital functions are seriously compromised or have failed temporarily. However, still approximately 15 to 30% of patients treated in intensive care units (ICUs) succumb to their illnesses or injuries (Vincent et al. 2014; Moran et al. 2008). The majority of these patients die after limitations of treatment were implemented, that is after the treatment goal was altered from cure to comfort. In most cases, life-sustaining treatments are withheld or withdrawn, and the emphasis of the therapy towards the end of the patients’ lives rests on alleviating their suffering and creating an atmosphere of dignity, comfort, and peace (Curtis and Rubenfeld 2001).

The care at the end of patients’ lives—“end-of-life care” (EOLC)—has evolved into an important tool within the armamentarium of the modern critical care specialist, aided by palliative care specialists, if required and feasible (Baker et al. 2015; Aslakson et al. 2014). Despite widespread agreement as to the general need for adequate EOLC, there is considerable variation regarding its practice and implementation—not only between continents or countries, but also within countries, regions and even hospitals (Myburgh et al. 2016; Mark et al. 2015; Sprung et al. 2014; Barnato et al. 2012). Arguably, the main proportion of the variation is attributable to the individual providers, the reasons being, amongst others, schools of medical thinking, differences as to prognostication, hierarchy, ignorance, cultural norms, religion and religiosity.

The issue to be discussed henceforth is: How much variability in EOLC should we accept or do we need a clear-cut standard operating procedure (SOP) on the matter?

Standard operating procedures are written instructions that aim to assist clinicians in making decisions about routine procedures and treatments for specific conditions in specific locations. They are linked to evidence and are meant to facilitate good clinical practice (Davies 2009). By definition and goal, a SOP is quite similar to a guideline (oit.va.gov/services/TRM/TRMGlossaryPage.aspx), perhaps a little more circumscribed.

In healthcare, SOPs or guidelines have been widely developed and implemented, especially for scenarios where time-critical decisions need to be taken, often with scarce information about the patients, with various disciplines and professions involved, and with a requirement for noticeable leadership. Prominent examples for such scenarios are cardiopulmonary resuscitation, (prehospital) airway management, management of myocardial infarction, and (initial) sepsis treatment. Although few would argue with the benefits of guidelines in these circumstances, physicians’ adherence to them could be pointedly described as patchy at times (Milonas et al. 2017; UK National Surgical Research Collaborative 2017).

Whilst decisions regarding EOLC require prudent leadership as well, the decision-making process might appear to differ from the scenarios mentioned above:

The quintessence of EOLC is to align the medically indicated treatment option(s) with the wishes and goals of each individual patient under the specific circumstances, i.e. to align instrumental and value rationality as best as possible (Figure) (Neitzke et al. 2016). 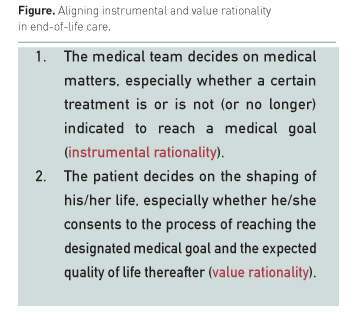 In practice, this task often comprises, but is not limited to, reaching a joint decision amongst the treating team as well as a shared decision with the patient and/or his/her legal representative regarding the extent of treatment and the (change of) treatment goals as well as the subsequent implementation of adequate symptom control, both physically and mentally (Michalsen and Hartog 2013).

This task apparently has not become simpler over the last years, mainly because on the one hand technological innovations have offered impressive advanced treatment options, also within ageing societies, and many patients have increased their expectations and demands on healthcare systems worldwide. On the other hand, many contemporaries fear to fall victim to the broad mechanisation of health care and its soulless delivery to them. The fundamental issue of prognostication requires transparency and the admission of uncertainty from the healthcare team, whilst patients and families would hope for an early and accurate prognosis as to the immediate and long-term outcomes (Neitzke et al. 2016; Ridley and Fisher 2013). Finally, an increasing concern regarding EOLC pertains to what is called “cultural relativism” (Beck 2015).

People do things differently; they value different things, believe in different authorities, follow different customs, but most importantly differ on what things they count as right or wrong, permissible or impermissible—also regarding healthcare. Such differences and the disagreements they precipitate can be addressed in more than one way, depending on one’s cultural, religious and social background, often without reaching common ground. How can we judge the ways of others and assume that we hold the only right answer? In modern societies, it is no longer obvious that the views of the professionals are leading the way, yet medical care should not abandon ethical core values—and cannot circumvent the respective legal stipulations.

Would then an SOP be needed to decrease the variability in EOLC? Arguably, the question should rather read, would an SOP be helpful and enforceable?

Given the complexities of EOLC outlined briefly above, an SOP would either have to be very broad to gain wide acceptance, thereby neglecting special regional and local circumstances, or it would have to be specifically orientated towards certain healthcare settings, thereby losing worldwide applicability. Even though there appears to be worldwide professional consensus on certain principles in EOLC (Sprung et al. 2014), it remains unclear whether they are implemented into daily practice outside the “circles of forerunners”. Furthermore, imagine a simple SOP for EOLC as succinct as the algorithm for basic life support: perhaps easy to follow, but missing the mission.

Instead of yet another SOP, adequate EOLC requires a dedicated healthcare team, truthful communication and cooperation within the team, understanding of the patient’s wishes, values and goals, assessment of the medical option(s) and their indications for the individual patient, shared decision-making with the patient and his/her family, and, not least, an ethical climate within the ICU to allow for adequate deliberation and discussion without hierarchical or economic pressure.

Therefore, a roadmap rather than an SOP is proposed (Table) to harmonise EOLC across institutions and, perhaps, healthcare systems. 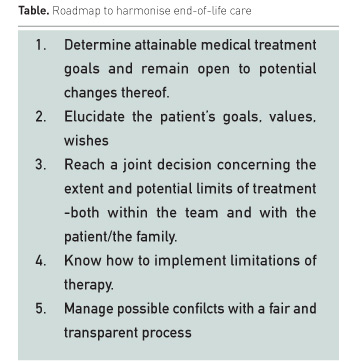 Curtis JR, Rubenfeld GD, eds (2001) Managing death in the in the ICU. The transition from cure to care. New York, Oxford University Press.

Should Families Be Allowed To Visit Dying COVID-19 Patients in the ICU?

COVID-19 has drastically changed how end-of-life care is practiced in the intensive care unit. Safety concerns for society... Read more

There is a renewed interest in novel extracorporeal technologies as a means of supporting individual organ failures. An emphasis... Read more

There are a number of complications related to the use of decompressive surgery. The most important thing to bear in mind is... Read more

end-of-life care, variability Variability in end-of-life care would seem to demand a standard operating procedure, but a roadmap towards harmonisation arguably would be easier to implement.