Trauma-induced coagulopathy (TIC) represents a clinical picture resulting from severity of injury, hypoperfusion, blood loss, consumption, dilution and platelet dysfunction. Activation of the protein C system seems to mediate increased fibrinolytic attack. Despite the complex pathophysiology, the clinical picture is quite uniform: low fibrin formation and consequently low clot firmness occur predominantly and are the outcome-related pathologies. In addition, plasmatic test results are more or less impaired, albeit thrombin generation is maintained in the early phase of trauma, and hyperfibrinolysis can be expected in the very severely injured patient.

During the past 10 years coagulation management has gained great importance. Several studies have shown that early and aggressive fresh frozen plasma (FFP) is better than late plasma administration in terms of survival. In addition the evidence that use of coagulation factor concentrates (CF) is an effective alternative has grown. However, only a few study data are available for use of CF and thus both treatments are still recommended by guidelines. The European guideline’s recommendation for initial coagulation resuscitation is for either fresh frozen plasma: red blood cell (FFP:RBC) at least 1:2 (evidence grade 1B) or fibrinogen concentrate and RBC (1C) (Rossaint et al. 2016).

The Reversal of trauma-induced coagulopathy using first-line coagulation factor concentrates or fresh frozen plasma (RETIC) study focused on treatment of coagulation in major trauma. It was a single-centre, parallel-group, open-label, randomised trial that aimed to compare the efficacy of FFP or CF in reversing TIC, as well as the arising transfusion requirements and development of multiple organ failure (MOF).

The study was terminated early due to institutional review board-mandated, predefined stopping rules; in the plasma arm there was an undesirable harmful effect of massive transfusion. The study received no outside funding. The results are published in Lancet Haematology (Innerhofer et al. 2017).

The hypothesis of the study was that the use of CF is superior to FFP for correction of TIC and that this should reduce bleeding and transfusion requirements, and consequently MOF.

The main secondary endpoints of the study were:

The inclusion criteria for the study were male and female patients ≥ 18–≤ 80 years who had experienced major trauma (ISS >15), who had clinical signs of ongoing bleeding, or who were at risk for significant haemorrhage assessed and judged by the emergency department (ED) team in charge of the patient, and who had the presence of coagulopathy defined by rotational thromboelastometry (ROTEM) —FibTEM assay (10-min value of fibrinogen polymerisation [FibA10] <9 mm) and/or prolonged initiation of coagulation in the extrinsically activated ROTEM (ExTEM) assay (coagulation time of ExTEM assay [ExCT] >90 s).

Patients were excluded from the study if they had sustained a lethal injury, received cardiopulmonary resuscitation at the scene, had an isolated brain injury, burn injury, avalanche injury, had received FFP or coagulation factor concentrates before ED admission, were admitted to ED more than 6 hours after the trauma, or had known use of oral anticoagulants, or platelet aggregation inhibitors within 5 days before injury or a known history of severe allergic reaction to plasma products.

Adult trauma patients with severe injury were screened by one of the study team and a ROTEM was performed (Figure 1). If ROTEM was pathological the patient was included. Using closed envelopes the patient was allocated to one of the two groups, a blood sample for detailed coagulation analysis was drawn and all patients received a tranexamic acid bolus. Patients in the plasma group received FFP at a single dose of 15ml/kg, the dose recommended by the European guidelines published in 2010 (the protocol was created in 2011) (Rossaint et al. 2010). As plasma is not a single substance but contains factors for thrombin formation, fibrinogen and also FXIII, we needed to consider this in the CF arm to avoid bias. Patients in the CF group received fibrinogen 50 mg/kg, if indicated also prothrombin complex concentrate (PCC) 20 IE/kg and FXIII 20 IE/kg was administered in patients needing double-dose fibrinogen (repeat). 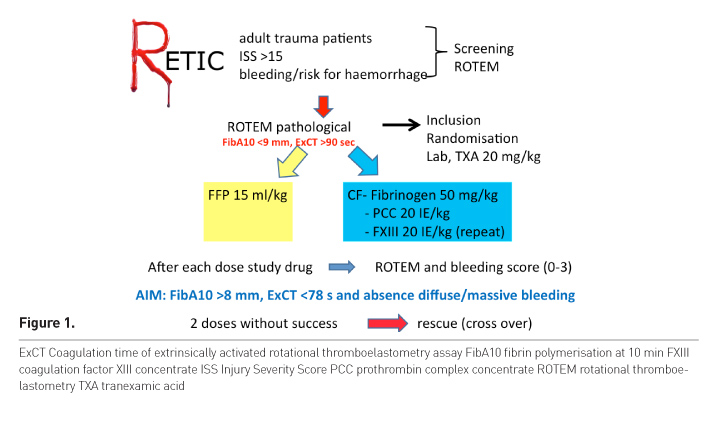 After study drug administration, ROTEM was checked again and the bleeding situation was assessed. Successful therapy was defined as normalised ROTEM and absence of diffuse or massive bleeding. Patients who showed insufficient reversal of TIC received a second dose of the study drug, and if this did not work rescue therapy was started, meaning patients of the CF group received plasma, patients of the plasma group received CF. Each treatment loop consisted of a maximum 4 steps—two times study drugs according to randomisation and one or two times rescue therapy.

Table 1 shows the baseline characteristics of the study population. 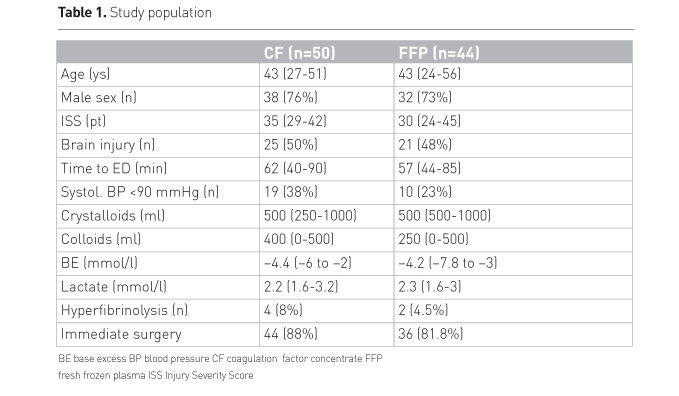 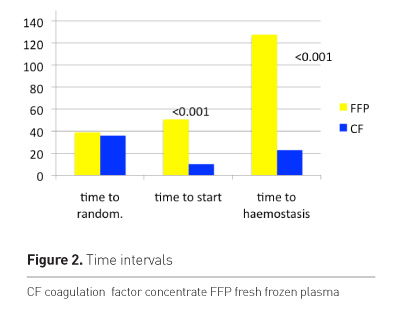 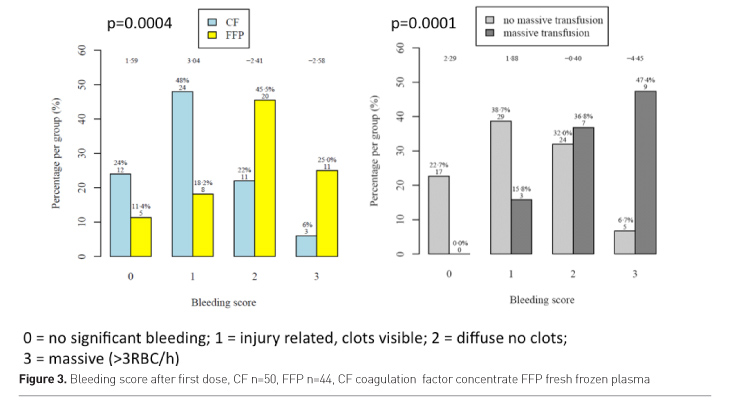 Figure 4 shows the percentage of patients who showed reversal of TIC after a single dose, double dose or need for rescue therapy after having received a double dose of study drugs. There was not only a big difference in success after single dose, but most importantly more than 50% of patients in the plasma group needed additional rescue therapy. The odds for receiving rescue were significantly higher for FFP patients and the calculated number needed to treat (NNT) was remarkably low for CF. On average 100 out of 207 patients receiving initial CF treatment will show reversal of TIC, which would have not occurred with initial FFP treatment. Figure 5 shows RBC transfusion. 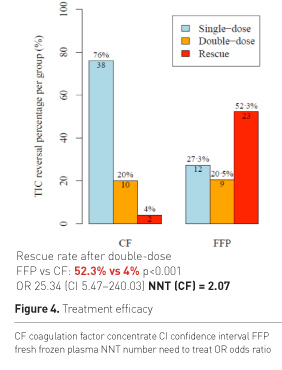 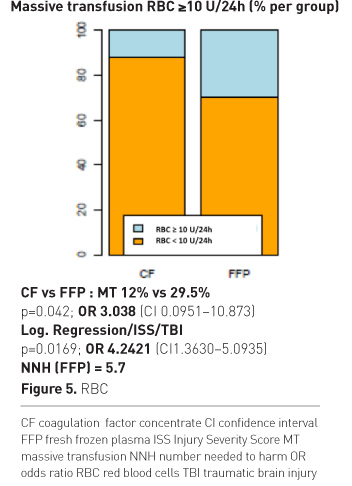 The odds for receiving massive transfusion were three-fold higher with plasma. If ISS and brain injury were considered as influencing factors, the odds were four-fold higher with plasma therapy. The calculated NNT was 5.7, meaning that on average 10 out of 57 patients treated initially with FFP need massive transfusion (MT), which would not have occurred with initial CF treatment. We also found a significant difference in numbers of RBC used during the first 24h. 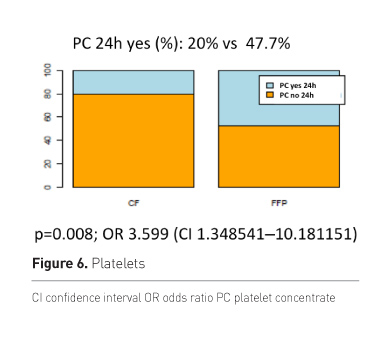 Table 2 summarises the dosages of study drugs used in the first 24 hours; important is the finding that patients in the plasma group needed FC after double dose FFP in comparable amounts as did patients receiving FC first-line, meaning nothing had been saved with late fibrinogen concentrate administration. PCC was seldom needed in the CF group; FXIIIc was frequently administered and also needed in the plasma group. 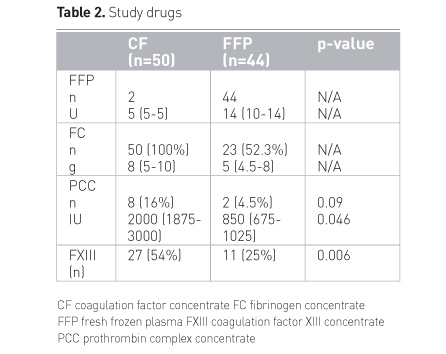 Figure 7 shows the response of ROTEM parameters according to therapy, blue is CF, yellow is plasma. EXCT shortened in both groups, shortest values were reached with CF; Exalpha, EXA10 and FibA10 increased with CF, but remained unchanged or even decreased with plasma. 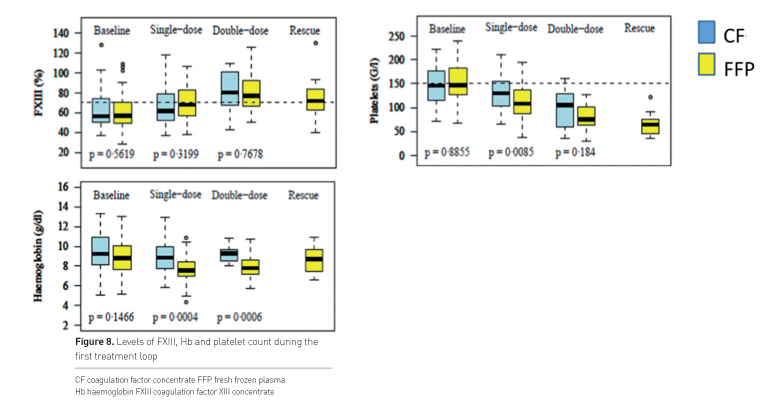 FXIII levels were comparable in both groups and at the intended value of 60%. Numbers of platelets and Hb decreased in both groups, lowest values were seen with plasma although these patients received more RBC and PC.

The overall primary clinical endpoint MOF was narrow and not significant with the available limited sample size (the calculated sample size for assessment of MOF was 200 patients) (Table 3). However, if the influencing factors ISS and brain injury were considered, which were also used for stratification at randomisation, there was an increased risk for MOF with plasma therapy. Patients in the plasma group developed MOF at significantly lower ISS than patients of the CF group (Figure 9). 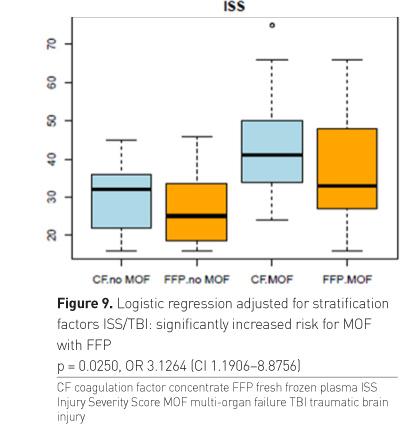 Targeted administration of coagulation factor concentrates is more effective than the usual transfusion of fresh plasma in patients with trauma-induced coagulopathy.

First-line administration of CF results in early stop of bleeding, reduced transfusion of all blood components, decreased rate of massive transfusion and decreased risk for MOF. In-hospital mortality was remarkably low with 7.4% and similar in both groups, as was the incidence of thromboembolic events. Thus our treatment concept seems to be quite safe. If you look at the mortality of recent studies including patients with comparable or even lower ISS you see mortality rates of 20 to 35% when transfusion packages are used which contain cryo very late or not at all. Interestingly authors of the last review on the usefulness of fibrinogen concentrate already suggested a probable survival benefit with use of FC (Fominskiy et al. 2016).

The RETIC study received no funding. Petra Innerhofer has received personal fees from Baxter, Bayer, CSL Behring, Fresenius and LFB, and non-financial support from Tem International outside the study.

Supplement from CSL Behring in collaboration with ICU Management & Practice