Treatment of bleeding patients during therapy with direct oral anticoagulants

Results from the French registry: GIHP-NACO

Presents results from a registry detailing information about the management of bleeding patients in the emergency room, operating room or intensive care unit during therapy with direct oral anticoagulants.

There is a large literature on the efficacy of direct oral anticoagulants (DOAC) to prevent stroke or systemic embolic events in patients with atrial fibrillation or to treat venous thromboembolism. DOAC, which include direct anti-Xa and thrombin inhibitors, have a favourable risk-benefit profile. However, as for any anticoagulant, they are associated with spontaneous or provoked haemorrhagic risk. The meta-analysis by Ruff and colleagues of trials comparing patients treated with Vitamin K antagonists (VKA) to patients treated with DOAC showed that with DOAC there were significant reductions in stroke, intracranial haemorrhage and mortality, similar to warfarin, but increased gastrointestinal bleeding.

The challenge remains to manage bleeding, emergency surgery or invasive procedures in patients treated with DOAC. Current French and European guidelines recommend use of haemostatic agents, such as prothrombin complex concentrate (PCC) and antidotes for the treatment of life-threatening bleeding associated with the use of DOAC (Albaladejo et al. 2017a; Kozek-Langenecker et al. 2017).

However, there is a lack of data and we are still trying to develop strategies to manage patients receiving DOAC who are bleeding and who need urgent surgery.

Steiner and colleagues showed that the sensitivity of usual coagulation tests to DOAC is quite variable (Steiner et al. 2013). It depends on the test and the DOAC.

For patient management in anaesthesia and critical care, we need a test that can:


The mechanism of action of PCC is different to reverse the anticoagulation effects of VKA or DOAC (Figure 1).

There are several animal studies on direct oral anticoagulants. For example, the study by Pragst and colleagues showed that with 50 IU/kg you reduce bleeding to control animals. Similar studies for apixaban or rivaroxaban have been completed.

In a study that measured thrombin generation times in healthy volunteers receiving a dose of 20 mg rivaroxaban or 150 mg dabigatran, after 2 hours a new measurement was performed for the drug effect of increasing doses of PPSB or FEIBA or rFVIIa. These showed partial or total correction, or even overcorrection (Marlu et al. 2012).

DOAC were first developed without reversal strategies, and antidotes were developed several years after DOAC were approved. Reversal agents include idarucizumab, andexanet alfa (PRT064445) and aripazine (PER977).

Pollack and colleagues (2017) in a prospective cohort study of safety and efficacy of idarucizumab in patients who had serious bleeding or needed an urgent procedure, found that 5g (2 x 2.5g administered within 15 minutes) of idarucizumab reversed the effect of dabigatran.

Lu and colleagues described an antidote for reversal of anticoagulation (Lu et al. 2013). This modified rFXa is produced in Chinese hamster ovary cells. It has no intrinsic procoagulatory effect, but it binds the direct anti-FXa inhibitors. 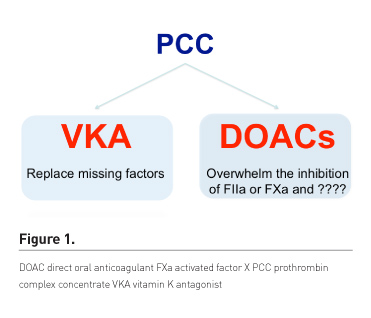 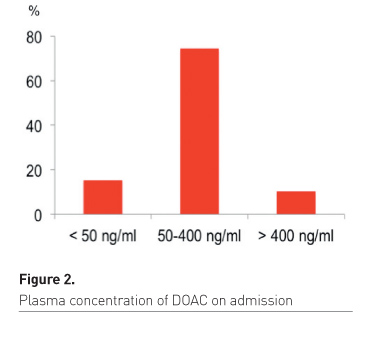 Connolly’s study raises all the problems related to the use of antithrombotic antidotes: What is the relationship between reversion and a clinical effect? How long is this reversion necessary? Is the antidote prothrombotic? And how to highlight it?

Bleeding in patients treated with DOAC

When we have a patient bleeding while treated by any anticoagulant, we must always consider the use of appropriate supportive and symptomatic treatment:

After all these treatments are used, there are several options to specifically reverse either VKA or DOAC.

Alter the pharmacokinetics of the DOAC by:

Waiting is the best antidote. Elimination halflives are short, unless the patient has a renal dysfunction, particularly with dabigatran.

Antidotes exist for dabigatran, and are being developed for anti-Xa agents, and phase III studies are in progress for idarucizumab, for example.

This can be considered if the patient is treated with dabigatran, but it is not a simple situation.

Administration of clotting factors should be included in local guidelines. In France we have a labelling for VKA, but it is off label to reverse DOAC.

FFP and recombinant activated clotting factor VII (rFVIIa) are not effective, or safe in this indication.

As clinicians, we have to ask: Is it efficient? Is it safe? Is it recommended in guidelines?

The GIHP (French Working Group on Perioperative Haemostasis) established a registry in June 2013 across 41 emergency centres in France and Belgium to collect data on the management of major bleeding in patients receiving DOAC (dabigatran, rivaroxaban or apixaban), who have been hospitalised for major bleeding or emergency surgery (Albaladejo et al. 2017b). The registry prospectively collected data on patient management, focusing on the use of haemostatic agents and the plasma concentration of DOAC. This registry data can be compared with data from large series treated with DOAC antidotes.

GI bleeding was present in 37% of patients, intracranial in 24%.

In November 2015 we analysed results from 732 mainly elderly patients, (median age: 78) and most with renal dysfunction.

On admission we took the laboratory results on plasma concentration of DOAC (Figure 2). This could be determined in 62% (452/732) of cases.

Figure 3 shows the relationship between activated partial thromboplastin time and prothombin time ratio and concentration of dabigatran and rivaroxaban. These results confirm the uselessness of this lab tests in these situations. 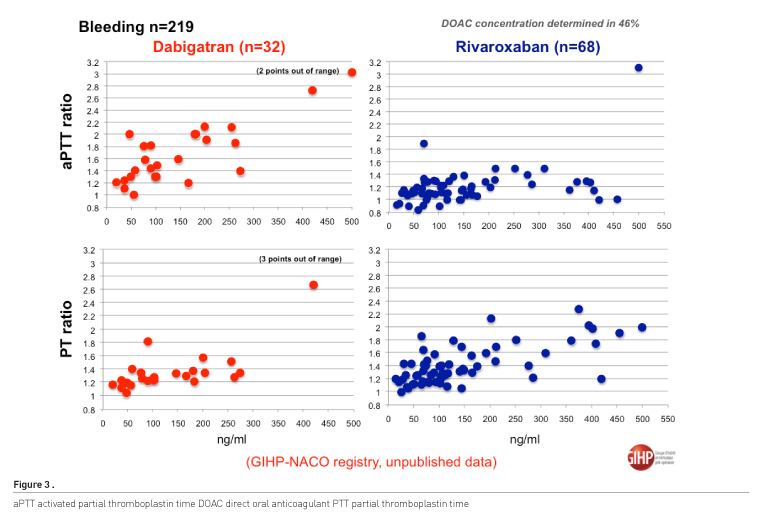 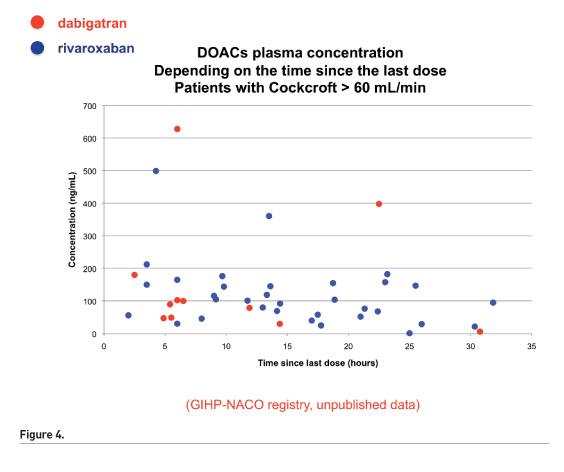 Figure 5 shows plasma concentration in DOAC depending on the time since the last dose in patients with clearance < 60 mL/ min. 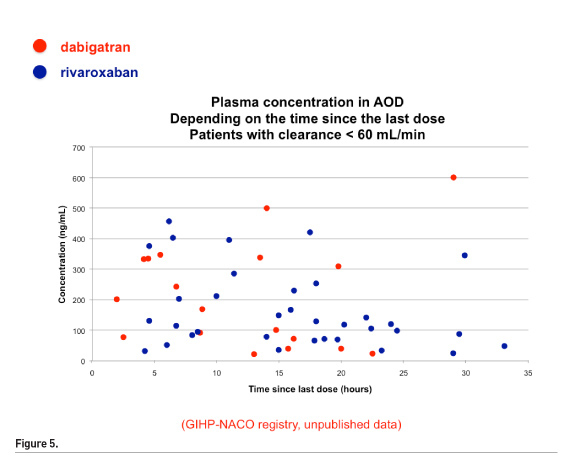 Activated or nonactivated prothrombin complex concentrates were administered in 38% (281/732) of patients.

It is quite difficult with this method and in these heterogeneous patients to assess the efficacy of PCC. In this study adequacy of haemostasis was assessed by local investigators.

By day 30 mortality was 13.5%, variable according to the bleeding site. Patients were also assessed for suspected major cerebral and cardiovascular events (MACCEs) after the bleeding event (Table 3). 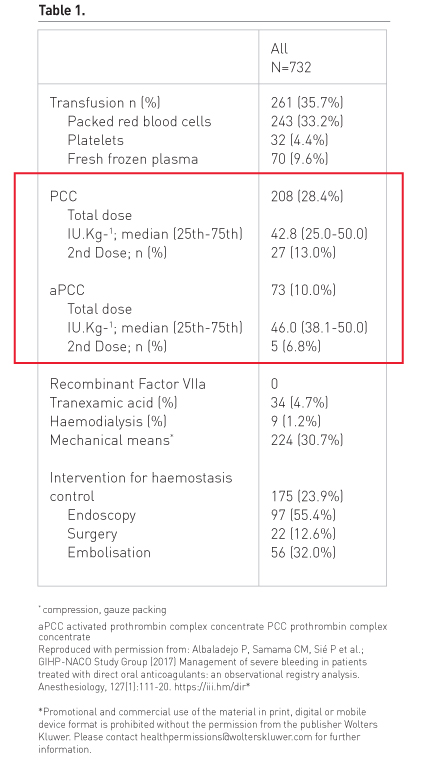 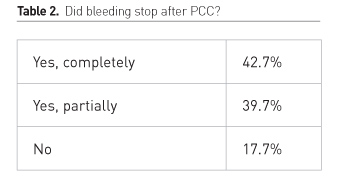 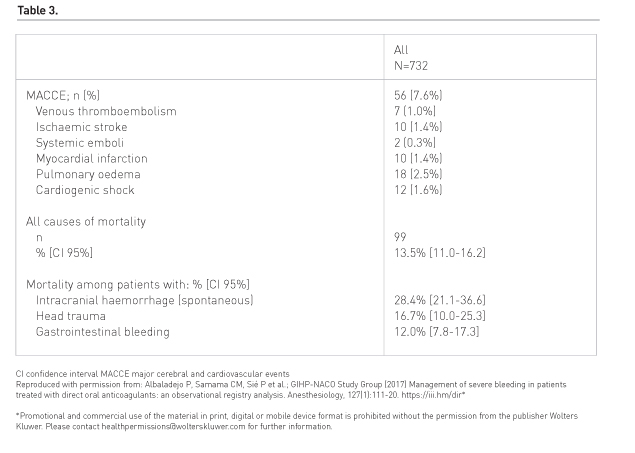 The GIHP-NACO registry study showed that plasma concentration was positively related to use of PCC. In this cohort, the mortality rates of patients with severe bleeding were similar to those observed for large series treated with DOAC antidotes. Plasma concentration could therefore be important to identify patients for whom the use or an antidote or PCC (if antidotes are not available) could be useful.

Arcellx Appoints Olivia Ware To Board Of Directors