Share
Download PDF Back
Targeted temperature management is the key intervention for improving neurological outcomes after cardiac arrest. We discuss new data on the optimal timing and modalities of targeted temperature management.
It took nearly half a century, from 1957 to 2002, for therapeutic hypothermia to acquire its current status as a key intervention for improving neurological outcomes in survivors of cardiac arrest. Despite growing interest from healthcare workers and researchers, many questions remain unanswered regarding this treatment tool. Recent large multicentre trials raised as many questions as they provided answers. In this review, we will try to reconcile new and old data, explain discordant results, and discuss future trials of therapeutic hypothermia and other aspects of the management of cardiac arrest survivors.
Indications of Therapeutic Hypothermia
Cardiac Arrest in Shockable Rhythm
For the past 12 years, treatment decisions for cardiac arrest survivors have relied largely on two trials reported in 2002 (Hypothermia after Cardiac Arrest Study Group 2002; Bernard et al. 2002). Both trials showed improved neurological outcomes with hypothermia between 32° and 34° compared to normothermia after cardiac arrest in shockable rhythm. The vast majority of observational, retrospective, and propensity-adjusted cohort studies support this finding. The landmark Targeted Temperature Management (TTM) trial reported in 2013 (Nielsen et al. 2013) failed to demonstrate any difference in neurological outcomes or survival between hypothermia at 33° and hypothermia at 36°C. The results of the TTM trial complicate the interpretation of another preliminary study showing better outcomes with hypothermia at 32°C compared to 34°C (Lopezde-Sa et al. 2012).
These data have generated active controversy. The International Liaison Committee on Resuscitation (ILCOR) issued the following statement:

Pending formal consensus on the optimal temperature, we suggest that clinicians provide post-resuscitation care based on the current treatment recommendations. We accept that some clinicians may make a local decision to use a target temperature of 36°C pending this further guidance (ILCOR 2013). 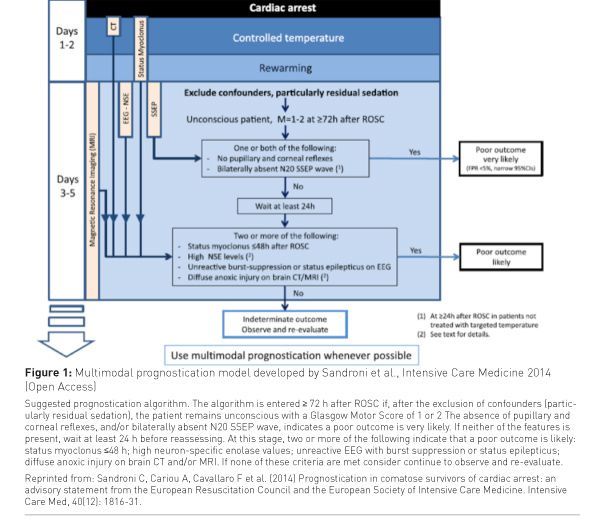 Predicting a poor neurological prognosis is important to determine whether life-sustaining interventions should be withheld or withdrawn. There is growing evidence that factors predicting a good prognosis can be assessed during TTM. Thus shivering (Nair and Lundbye 2013) and bradycardia (Staer-Jensen et al. 2014; Thomsen et al. 2015) during TTM are associated with better outcomes. Furthermore, although the use of specific cooling devices does not affect patient outcomes, they indicate how much power is needed to cool the patient, and greater power is associated with better outcomes (Murnin et al. 2014).
Predictors of neurological outcomes must be well characterised both for designing trials of individualised treatment strategies and to provide accurate information to the family. Attention to cognitive impairments and emotional difficulties in cardiac arrest survivors may improve outcomes even in the medium and long term (Moulaert et al. 2015).
Conclusion
Although recent efforts have chiefly targeted the first three links in the chain of survival (Becker et al. 2015), we must keep in mind that TTM is the only intervention proven to favourably affect the fourth link. Huge knowledge gaps still exist regarding all aspects of patient management during TTM. Further trials are needed to fill these gaps and to provide the information needed to develop individualised treatment strategies.
Acknowledgements
We thank A. Wolfe, MD, for assistance in preparing and reviewing the manuscript.

The Final Link The "Chain of Survival" Concept After Out-of-Hospital Cardiac Arrest To overcome a time-sensitive and... Read more