The "Chain of Survival" Concept After Out-of-Hospital Cardiac Arrest

To overcome a time-sensitive and severe condition with a low survival rate—out-of-hospital cardiac arrest (OHCA)—the following four links of the “chain of survival” concept were introduced by Newman in the 1980s (Newman 1989): 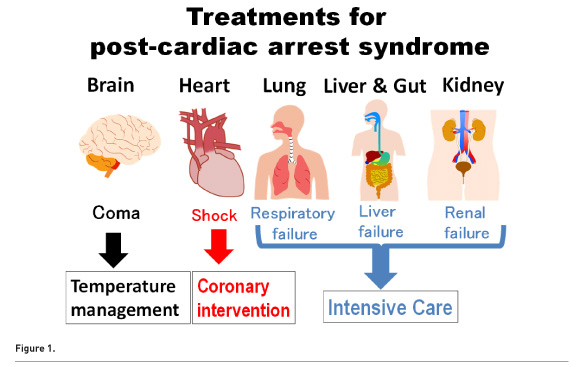 Thus the European Resuscitation Council revised the final link in the chain-of-survival concept from “early advanced cardiac life support” to provision for “post-resuscitation care” in 2005 (Nolan 2005). In 2010 the AHA guidelines implemented a “fifth link,” which is “post-cardiac arrest care,” in addition to the previous four links, as another critical link in the chain-of-survival concept (Peberdy et al. 2010). Although the introduction of the final link of the “chain-of-survival” concept was a rational approach, no direct evidence supported its implementation at the time of the publication of the guidelines (Peberdy et al. 2010; Nolan 2005).

Aizu Chain-of-Survival Concept Campaign: From a Case to a Clinical Study

In spring 2008, a 58-year-old man suddenly lost consciousness and had a cardiac arrest. His wife immediately called emergency medical services and began chest compression. The emergency medical services provider found that he had ventricular fibrillation and performed defibrillation, which was unsuccessful. Our medical team participated in the resuscitation in progress and performed advanced cardiac life support, including adrenaline administration and intubation. We strictly followed the 2005 AHA Guidelines, which were the latest available at that time. However, it took 2.5 hours to achieve return of spontaneous circulation (ROSC). Immediately after achieving ROSC, his blood pressure decreased again in the emergency department. At that time, no consensus has been reached on the optimal treatment for post-cardiac arrest patients in our hospital. However, we provided what we believe was the most appropriate treatment for our patient (Fig. 2). Soon after the return of spontaneous circulation, he developed shock despite large doses of catecholamines. We therefore used venoarterial extracorporeal membrane oxygenation and an intra-aortic balloon pumping system with continuous renal replacement therapy. I spent several days and nights with him in the intensive care unit (ICU). After a month of aggressive intensive care in the ICU, he was discharged from our hospital with favourable neurological status.

The present case clarified two things. First, even if 150 minutes have passed before ROSC is achieved, the brain may not be completely impaired if the early links of the chain of survival are well conducted. Second, high-quality and aggressive ICU management is needed to counteract post-cardiac arrest syndrome. During the patient’s treatment the question “Could these treatments be performed outside the ICU?” arose, for which the answer is no. This led to the clinical question “Can patient outcomes improve if all patients with postcardiac arrest syndrome in this region are treated at a single ICU?” To answer this clinical question, we performed a region-wide multicentre prospective study, the Aizu Chain of Survival Concept Campaign, to evaluate the effect of the final link in the chain of survival, which was defined as multidisciplinary postresuscitation care (Fig. 3) (Tagami et al. 2012). 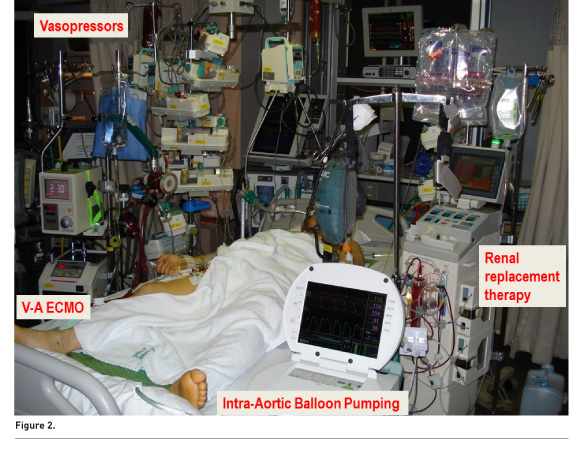 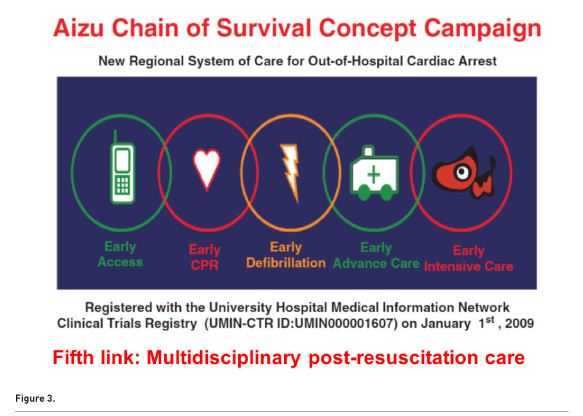 The Aizu region (Fukushima, Japan) is a suburban/rural area with 300,000 residents. All 12 emergency hospitals (one tertiary care and 11 non-tertiary care hospitals) in the region participated in the study. After the patients with OHCA achieved ROSC at each hospital, they were concentrated in one tertiary care hospital and treated aggressively to focus on the fifth link. We used an advanced haemodynamic monitoring system (PiCCO monitoring system, PULSION, Germany) to measure several important haemodynamic and pulmonary variables for all the patients. The PiCCO system provides cardiac output and global end-diastolic volume as volumetric haemodynamic variables. It also provides extravascular lung water, which represents the degree of pulmonary oedema, and the pulmonary vascular permeability index, which can be used to differentiate between cardiogenic and non-cardiogenic pulmonary oedema. We performed individualised treatment, and optimised haemodynamic and respiratory instability by using these advanced variables, because every single patient has different cardiac function, fluid status, vascular permeability and previous medical history (including time from collapse to ROSC). After implementation of the fifth link, the proportion of survivors with a favourable neurological outcome increased significantly, and the fifth link was found to be an independent factor for a favourable neurological outcome (Tagami et al. 2012).

The last decade has witnessed a significant reduction in OHCA-related mortality rate worldwide (SOS-KANTO 2012 Study Group 2015; Fugate et al. 2012; Wissenberg et al. 2013). Several large nationwide studies have suggested that the improvement in outcomes may be related to the provision of post-resuscitation care in addition to the improvement of the actions of bystanders and treatments before the ROSC (van der Wal et al. 2011; Fugate et al. 2012; Tagami et al. 2016; Kim et al. 2013). Fugate et al. reported that the in-hospital mortality rate of patients with cardiac arrest in the United States decreased by 11.8% from 2001 to 2009, based on the analysis of the American National Inpatient Sample database (Fugate et al. 2012). Van der Wal et al. reported that inducing a mild therapeutic hypothermia was associated with a 20% relative reduction in OHCA-related in-hospital mortality in the Netherlands (van der Wal et al. 2011). Kim et al. from Korea reported that provision of post-resuscitation care resulted in a significant improvement in patient outcome, and concluded that the systematic inclusion of the fifth link is recommended for improving patient outcomes (Kim et al. 2013). We recently reported that the provision of therapeutic hypothermia and percutaneous coronary intervention increased significantly among cardiogenic OHCA cases related to ventricular fibrillation over the period 2008 to 2012 in Japan (Tagami et al. 2016).We found that in-hospital mortality decreased significantly over the 5-year period. The results of logistic regression analyses using multiple propensity score analyses suggested that the decrease in mortality can be explained by the increase in the provision of both therapeutic hypothermia and percutaneous coronary intervention (Tagami et al. 2016).

Recent evidence apparently indicates that the initial links before achieving ROSC are critically important. The final link can be initiated only if the previous links in the chain are well connected and patients achieved ROSC. Each link in the chain of survival could be represented as a relay baton. Therefore a relay baton should not be dropped before the final runner. However, if the baton is passed to the final runner, that specialist should perform as well as possible to achieve the goal of treatment. Our goal is not only to achieve spontaneous circulation but also to restore the patient’s previous quality of life. Thus the true goal is located after completion of the final link. An emergency department physician must start the final link immediately after the patient achieves ROSC. Intensivists, cardiologists, neurocritical care physicians, nurses, medical engineers and all providers working in the ICU have the responsibility to complete the final chain in the survival link.

Several large nationwide studies have suggested that recent improvements in outcome are associated with the provision of post-resuscitation care. Recent studies also showed that admission to ICUs in high-level-of-care centres and administration of aggressive intensive care after OHCA were associated with better outcomes. Although randomised trials have not yet been performed, providing aggressive post-cardiac arrest care is a reasonable approach.

Takashi Tagami declares that he has no conflict of interest.

Why You Should Always Debrief Your Resuscitations

Everyone who is active in resuscitation teams will admit: treating a patient in cardiac arrest is a challenge and often things... Read more

Case Report Using Nonbronchoscopic BAL Use of the HALYARD* Mini-BAL Sampling Catheter proved invaluable in the case of... Read more

The Final Link The "Chain of Survival" Concept After Out-of-Hospital Cardiac Arrest To overcome a time-sensitive and... Read more