Share
Download Article Back
The interventional single-centre with historical control study was conducted in a 600-bed multidisciplinary hospital to evaluate 4 years’ results of an antimicrobial stewardship programme. We found a significant reduction in average duration of courses of antimicrobial therapy, length of stay of patients with infection in ICU, mortality in patients with bacteraemia, the rate of extended-spectrum beta-lactamases (ESBL) and Carbapenem-resistant production of Gram-negative bacteria, and the role of the ESKAPE (Enterococcus faecium, Staphylococcus aureus, Klebsiella pneumoniae, Acinetobacter baumannii, Pseudomonas aeruginosa, and Enterobacter species) group in nosocomial infections with bacteraemia.
Nosocomial infections are caused by a variety of organisms; most of them are multidrug-resistant (MDR) isolates, which refer to a group of ESKAPE pathogens (Shevchenko and Onishchenko 2001; Boucher et al. 2009). The multicentre epidemiologic study Extended Prevalence of Infection in Intensive Care (EPIC) II demonstrated the structure of nosocomial infection pathogens: Enterobacteriaceae was shown as the cause of 35.7% of all infections, Ps.aeruginosa – 19.9%, Ac.baumannii/haemolyticus – 8.8%, St. aureus – 20.5%, E. spp. – 10.9%, and Candida spp. – 17.0% (Vincent et al. 2009). Antimicrobial resistance directly affects the results of treatment, due to the difficulties in choosing antibiotics for starting therapy and even after identification of the pathogen (Ferrer et al. 2014; Blot et al. 2007; Kumar et al. 2006; Gelfand et al. 2016; Surgical infections of skin and soft tissues 2009; Abdominal surgical infection 2011; Dellinger et al. 2013; Kwon et al. 2007; Marchaim et al. 2008). An inappropriate course of antimicrobial therapy (AMT) leads to further emergence, spread of resistance and the vicious circle closes. The hospital becomes a comfortable environment for MDR infection and a high-risk place for patients. The main way to change this situation is the implementation of an integrative strategy including control of the prescription of antibiotics in combination with a comprehensive infection control programme. Numerous international and national antimicrobial stewardship programme (ASP) recommendations have been developed, but only limited data demonstrate positive results in real life clinical practice.
You might also like: Antimicrobial stewardship in the ICU

Our purpose was to analyse the effectiveness of the local ASP within 3 years after implementation.

We started the ASP in early 2013, when according to guidelines (Savelyeva et al. 2012) a multidisciplinary team was formed with the main task of analysing the results of microbiological monitoring and to prepare the first edition of protocols of perioperative antibiotic prophylaxis and empirical AMT (Protocol – in this article). The team included specialists who could make decisions about the use of antibiotics. In June 2013 the protocols were ready. From this point protocols are updated annually, based on the local antibiotic resistance data (more than 20,000 strains), and include different schemes of AMT regarding the patient's risk factors for antibiotic-resistant pathogens, such as age, previous stay in an acute or chronic care facility, invasive procedures, antibiotic exposure etc. The ASP also includes infection control measures, the development plan for the bacteriological laboratory (real-time PCR, full-genomic new generation sequencing), educational programmes and internal audit.

We compared a historical control period (2012) and intervention period (2014–2016). To determine the statistical reliability of the differences in absolute values in the case of a normal distribution, the Student's t-test was used, with the Mann-Whitney criterion different from the normal one. To determine the statistical significance of the differences in relative values, the Pearson's chi-squared test with Yates continuity correction or, where appropriate, Fisher’s exact test were used. A 95% confidence interval was additionally indicated in describing the resistance indicators due to a large data set. Descriptive variables are represented as n (%) or mean value m (standard deviation σ) and median M (first and third quartiles Q1-Q3).

ICU patient characteristics are presented in Table 1. This 12-bed ICU is specially for patients with different complications developed during the treatment. 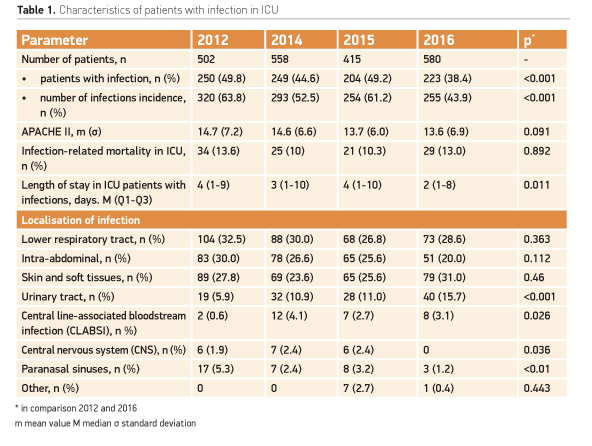 Table 1 shows that for all periods nosocomial infections are the main reason, among all complications, for being in ICU, with a reduction in number after 3 years of ASP implementation. Therefore ASP may help to reduce the infection rate but not as fast wins. The infection control system begins to bring real results only when, as the result of ASP, specialists changed the emphasis from the question of choosing an antibiotic to the questions of pathogen identification and transmission.
The severity and mortality in this group of patients remained the same, probably because it depends on many factors, including underlying disease and co-morbidity. The length of ICU stays of patients with infection also varied significantly. In 2012 the duration of such patient treatment in the intensive care unit (ICU) was 1 to 126 days, and in 2016 from 1 to 112. However, the median duration of ICU stays in 2016 decreased and this was statistically significant.
The localisation of infections has not changed: lower respiratory tract infections accounted for about 1/3 of the total infections in the ICU, the remaining 2/3 were intra-abdominal, skin and soft tissue, urinary tract infections and other localisation. Morever, on the first steps of the ASP, the level of infections may rise and the structure can vary, because it largely depends on the quality of diagnostics and internal audit. Thus, in our hospital in 2014 (in comparison with the pre-interventional period) the frequency of CLABSI and urinary tract infections increased due to the introduction of unified criteria for diagnosing these complications in 2013 (in the first version of the Protocol).
The decrease of infection rate in ICU patients during the intervention period respectively reduced the number of AMT courses (Table 2). However, a significant reduction in AMT duration is an obvious consequence of ASP implementation. It is important to note that we compared the average duration of courses of AMT, including the period of post-ICU treatment. We consider this approach to be of high importance, since ASP can be effective only when implemented in the whole hospital, and not just in the ICU.

After ASP implementation the frequency of bacteraemia caused by MDR organisms, as well as the incidence of Candida spp. changed significantly (Table 3). The level of Gram-positive microorganisms bacteraemia remained the same: only single strains of MRSA were detected annually. Vancomycin-resistant E. faecium strains were recorded last in 2011. After the ASP implementation, the incidence of bacteraemia of Enterobacteriaceae spp. ESBL+, K. pneumoniae CPR reduced significantly. Moreover, in the intervention period the production of ESBL in strains of K. pneumoniae and E. coli significantly decreased from 61.8%; 95% CI 58.9-64.7% to 40.0%; 95% CI 43.3-36.7%, p <0.0001, and the analysis of CPR Gram-negative bacteria noted a significant decrease in the resistance to this group of antibiotics from 32.4%; 95% CI 34.4-30.4% to 23.7%; 95% CI 26.0-23.7%, p <0.0001. 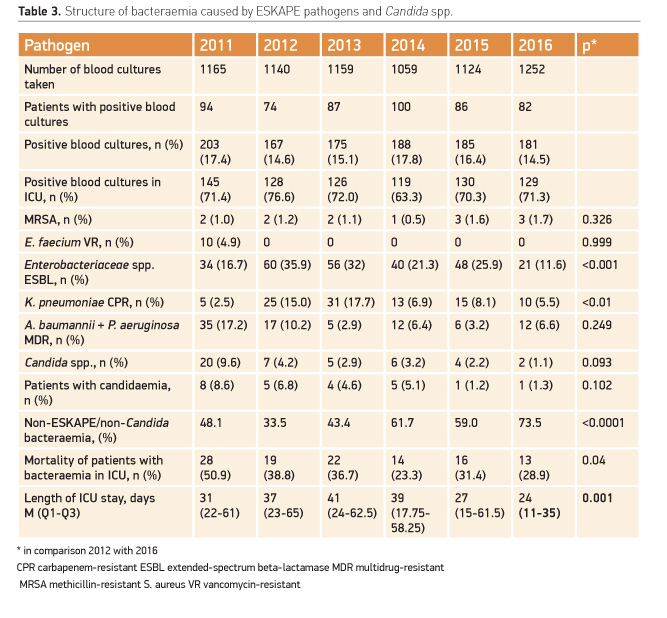 Usually, the main goals of ASP are considered as reducing the costs of antimicrobial therapy, consumption of antibiotics, the number of errors in prescribing AMT, the incidence of infectious complications and mortality. All these goals are certainly important, but they cannot unite in one team different specialists from attending physicians to the CEO, because each of them has its own priorities. Obvious or hidden conflict of interests ultimately lead to the transformation of the ASP into a one-off action, where the results are negative or questionable. The CEO does not receive the expected savings; doctors, waiting for new possibilities in drug choice, really receive only tightening control, but not the right to prescribe needed drugs.
We chose another ASP goal―reducing the level of antibiotic resistance in the hospital. This goal is often underestimated by practising physicians and especially by the hospital administration, but the choice of such goals does not cause a negative attitude. This is enough to start reforms, and only later does it become clear for all that reducing the incidence of infections caused by MDR pathogens is beneficial to everyone. It helps to simplify the selection of starting and empirical therapy, reduce the length of hospital stay and mortality in patients with infection, and reduce costs. Step by step, the level of antimicrobial resistance in hospital turns into a common goal, unites specialists into a team, becomes the most important criterion for assessing the effectiveness of ASP and turns this programme into a permanent instrument for improving the quality of medical care.

The authors declare that they have no conflict of interest.

(I expert, I question, I answer)  Have you got something to say? Visit  https://healthmanagement.org/c/icu/list/blog  or... Read more

Trends in epidemiology and antimicrobial resistance in intensive care units

The intensive care unit has a unique environment, mainly because it treats severe and critically ill patients who require special... Read more

The ongoing economic crisis in Greece and inflow of refugees has led to changes to the pre-hospital emergency medicine services.... Read more