Editorial Board Member since 2009

Respiratory monitoring in the perioperative period

A recent large prospective cohort study conducted on different types of surgery has demonstrated that the incidence of in-hospital mortality and postoperative pulmonary complications (PPCs)is relatively high. Moreover, PPCs are associated with prolonged hospital stay and higher hospital mortality (Pearse et al. 2012).Ongoing studies are trying to find effective strategies for improving outcome. A keystone in PPCs prevention and early treatment is intensive perioperative respiratory monitoring. In this review, the authors aim to describe different methods to monitor respiratory function during the perioperative period in general and under specific conditions, and the role of recently published predictive scores.

Respiratory Function during the Perioperative Period

The induction of anaesthesia and curarisation lead to a loss of normal coordination of respiratory muscles, reduction of diaphragmatic tone, decrease in functional residual capacity (FRC), oxygen reabsorption and changes in surfactant function. These factors are associated with the formation of atelectasis, collapse of small airways and decrease in respiratory system compliance. Atelectasis leads to deterioration of ventilation/perfusion ratio and increase of intrapulmonary shunt. Furthermore, the absence of positive end-expiratory pressure (PEEP), the use of high tidal volume ventilation and high plateau pressure (>10 ml/kg and >30 cmH2O, respectively) are associated with the occurrence of Acute Respiratory Distress Syndrome (ARDS) (Tusman et al. 2012). Pathogenesis of perioperativeARDS involves tidal recruitment and cyclic opening and closing of the boundary between aerated and collapsed lung units, and tidal over-distension in non-atelectasis lung units(Slinger 2008).

Since early detection is essential for prevention and for delivery of appropriate treatment,such as non-invasive ventilation in atelectasis or adequate PEEP during general anaesthesia, in tegration of various monitoring tools is warranted.In a cohort of 2,000 reported incidents during general anaesthesia, simple pulse oximetry or capnography could detect over half of all events(Webb et al. 1993).

Since SpO2 is physiologically related to PaO2, according to the oxyhaemoglobin dissociation curve, in patients with PaO2 higher than 60 mmHg, SpO2 has low sensitivity for detection of hypoxemia. However a study inARDS patients has demonstrated a good correlation between SpO2/FiO2 ratio and PaO2/FiO2 ratio and proposed its use in substitution of PaO2/FiO2 ratio (Rice et al. 2007).

In the emergency room pulse oximetry can underestimate oxygenation in patients with septicaemia and septic shock (Wilson et al. 2010). Nail polish, especially white, black, purple and dark blue can affect the measurement of SpO2 although the range of error is ±2% (Hinkelbein et al. 2007).

The capnogram is a simple non-invasive method for the assessment of blood CO2, and can reflect alveolar ventilation, pulmonary perfusion and appropriate connection of ventilatory apparatus to the patient.The waveform characteristics of capnography comprise three phases(see Figure 1). Phase I, which is breathed out initially, represents the dead space due to airway anatomy and apparatus. Phase II represents the alveolar gas emptying from alveoli. Phase III represents CO2 removal from alveolar gas.The end-tidal CO2 concentration (PetCO2) is measured at the highest point in phase III.This parameter is an indirect measurement of PaCO2. Figure 1 also shows common pathological findings in capnography. 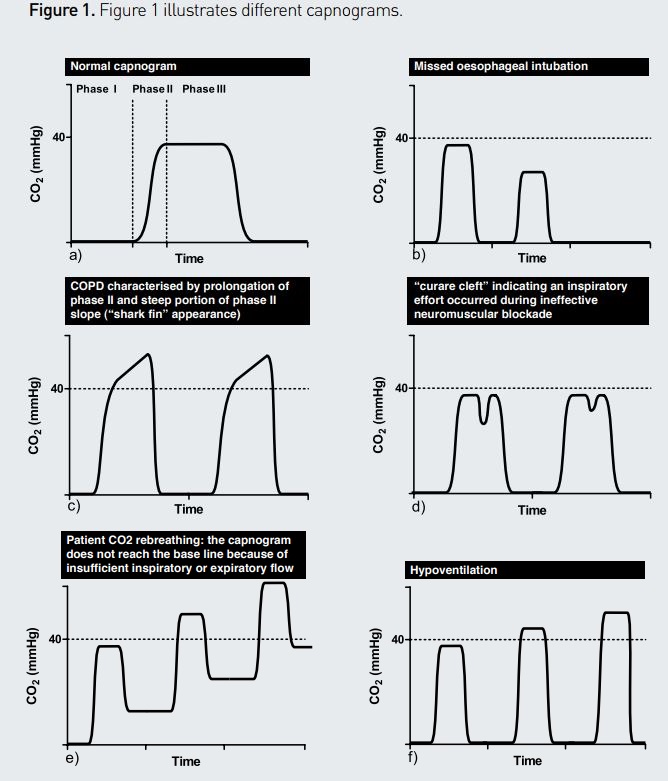 In the intraoperative period, the airway pressure and compliance measurement could be helpful to optimise the appropriate tidal volume, plateau pressure and PEEP. In some circumstances, such as postoperative intra-abdominal surgery, obesity and patients with increased intra-abdominal pressure (IAP),respiratory compliance is not only affected by lungs but also by the chest wall, and the airway pressure might not represent the real stress and-strain of the lungs. Preoperative oesophageal catheter placement can measure transpulmonary pressure (Ptp), work of breathing and intrinsic PEEP in high-risk patients. Ptp is the distending force of the lung and is the difference between Palv and Ppl where Palv is the alveolar pressure and Ppl is the intrapleural pressure, measured by balloon placement in the oesophagus.Thus, the measurement of oesophageal pressure could be of help for better titration and optimisation of the pressure required for alveolar recruitment, the tidal volume, and safe plateau pressure as well as the PEEP level during the perioperative period (Pelosi et al. 2011). Furthermore, oesophageal pressure monitoring can be used in the post-operative period to minimise patient-ventilator asynchronies, particularly in COPD patients.

The emergence of new mini-invasive techniques for haemodynamic assessment allows continuous monitoring of cardiac output and other parameters at the bedside, giving prompt information about the role of haemodynamics in the development of respiratory failure. Many of these methods are based on pulse pattern analysis, which can be measured even on a peripheral arterial line, during or after major surgery (Jones et al. 2006; Cannesson et al. 2009). Recently a totally non-invasive alternative has been proposed, but its accuracy is under debate (Broch et al. 2013). Minimally invasive techniques allow transpulmonary thermodilution to estimate extravascular lung water (EVLW) and EVLW index (EVLWi) (Michard 2007).Transthoracic echocardiography has been proposed for estimation of cardiac output (Demirkol et al. 2013).The abovementioned techniques allow the evaluation of stroke volume variation, which is of emerging interest in the evaluation of patient fluid responsiveness (Cannesson et al. 2009).

There is emerging consensus about the possibility of using bedside lung ultrasound (LUS) for respiratory monitoring (Bellani et al. 2012; Luecke et al. 2012;Via et al. 2012), for the early assessment of PPCs such as pneumothorax (Ueda et al. 2011), and to monitor the response to non-invasive ventilation (Liteplo et al. 2010) and pharmacological therapy (Via et al. 2010). LUS is capable of estimating EVLW non-invasively at the bedside (Baldi et al. 2013) (see Figure 2). Computer-aided quantification of LUS has been recently proposed (Corradi et al. 2013), and could lead to a reduction in time-consumption and operator-dependence. 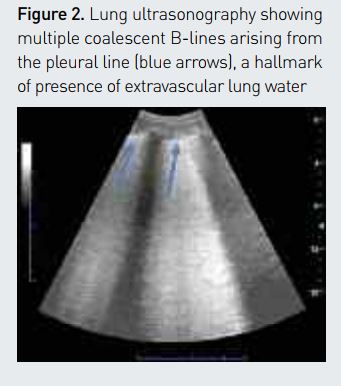 In morbid obesity the forced vital capacity, maximal voluntary ventilation and expiratory reserve volume are markedly reduced. During anaesthesia, an increase in BMI has a good correlation with a decrease in lung volume, lung compliance and oxygenation (Pelosi et al. 1998) and with increase of lung resistance. The decrease of functional residual capacity is linked with atelectasis formation.(Pelosi et al. 2010). Ventilator settings during anaesthesia in obesity should include: 1) low tidal volume ventilation 2) open lung approach by PEEP and recruitment manoeuvre 3) FiO2 less than 0.8 (Pelosi et al. 2010).We recommend monitoring carefully airway plateau pressure, intrinsic PEEP and Ptp. Further studies are warranted to define the optimal respiratory monitoring and setting in this group of patients.

In patients with obstructive sleep apnoea undergoing elective surgery, an oxygen de-saturation index ≥ 5 is associated with higher incidence of PPCs (Hwang et al. 2008). Thus, in patients with high sleep apnoea clinical scores should be closely monitored for oxygenation during the perioperative period (Gali et al. 2009). In a recent large cohort study determining the impact of sleep-disordered breathing (SDB) on postoperative outcome in patients undergoing elective surgery, despite an association of SDB with postoperative cardiopulmonary complications, the diagnosis of SDB was not independently associated with increased in-hospital mortality (Mokhlesi et al. 2013).

Risk factors associated with PPCs depend on basic underlying status, method of anaesthesia, smoking status, type of surgery and post operative anaesthetic drugs. The type of surgeries most closely associated with PPCs are abdominal aortic aneurism repair, oesophagectomy and major abdominal surgery (22.5, 18.9 and 14.2% respectively) (Smetana et al. 2006). Several investigators demonstrated that the overall risk of PPCs can be predicted, and developed different scores. Most of the parameters needed for score calculation can be assessed at the bedside, and these scores can help physicians to identify high-risk patients who require intensive monitoring (see Table 1).

Investigators from the Veterans Health Administration combined several factors to develop a postoperative respiratory failure risk index (PRF) and pneumonia risk index, already validated, for postoperative respiratory failure in major non-cardiac surgery based on National Surgical Quality Improvement Program (NSQIP) data. These indexes have some limitations in terms of generalisability because the majority of the population were male veterans(Arozullah et al. 2000;Arozullah et al. 2001), and the inclusion of numerous risk factors in the index makes it difficult to use in everyday clinical practice. These indexes were included in a systematic review (Smetana and Lawrence 2006) and in the 2006 American College of Physicians guideline (Qaseem et al. 2006).

Canet et al., for the ARISCAT group, have recently identified variables, namely pre-operative arterial oxygen saturation, pre-operative haemoglobin concentration (less than 10 g/dL) and respiratory infection in the previous month, as strong predictors. Additionally, the study has confirmed that surgical procedure and duration are predictors of PPCs. The areas under ROC curve are 90 and 80 for the development of PPCs predictive index and the validation of this index, respectively. The promising advantages of this score are simple clinical assessment and use of objective variables. A large European study (PERISCOPE) has been completed, and will act as external validation of this score (Canet et al.2011).

Kor et al. developed the surgical lung injury prediction score (the SLIP score) for distinguishing patients undergoing high-risk surgery WHO will need mechanical ventilation during general anaesthesia for longer than three hours and for predicting the occurrence of postoperative ARDS. This score can identify patients that will develop early postoperative ARDS with anAUC of 0.82 (95% CI 0.78-0.86) (Kor et al. 2011).However, this study could be biased by its single centre retrospective design and heterogeneity of population.

Respiratory monitoring is essential in the perioperative period to optimise mechanical ventilation, for risk stratification and for early detection of postoperative pulmonary complications. A deep knowledge of different monitoring techniques is crucial to improve the quality of care in surgical patients.

Serpa NetoA, Cardoso SO et al.(2012)Association between use of lung protective ventilation with lower tidal volumes and clinical outcomes among patients without acute respiratory distress syndrome: a meta analysis. JAMA, 308(16):1651-9.