Share
Download Article Back
Reviews the potential uses and pitfalls of capnography in critically ill patients, especially for haemodynamic and respiratory monitoring.

Expired CO2 can be easily monitored in the intensive care unit (ICU), especially in patients under invasive mechanical ventilation, using infrared measurement by sampling mainstream expiratory flow using an in-line chamber, or sidestream expiratory flow (by continuous aspiration through a sampling line connected between the intubation tube and the Y-piece of the ventilator).

By allowing a combined analysis of respiratory, haemodynamic and metabolic status, capnography is a versatile tool with developing clinical applications in the ICU. While capnography is commonly used in the operating room, this technique may be underused in the ICU (Cook et al. 2011; Georgiou et al. 2010; Ono et al. 2016).The aim of this paper is to highlight the advances and the usefulness of expired CO2 monitoring in the specific ICU setting.

Capnography is a reliable tool to confirm the correct placement of endotracheal (Guggenberger et al. 1989) or supraglottic devices, given the lack of significant CO2 production in the oesophagus. Despite a high diagnostic performance (Silvestri et al. 2005), false negatives are encountered in the cardiac arrest setting (Heradstveit et al. 2012) or as a consequence of technical pitfalls (leaks around endotracheal cuff (Dunn et al. 1990), kinking of the sampling line, ventilator failure…). False positives may happen if the stomach contains CO2 (e.g. in patients receiving noninvasive ventilation for hypercapnic respiratory failure). Finally, despite recommendations for systematic use during intubation in the ICU, the clinical impact of this strategy remains to date unknown in the ICU setting. Indeed, most of the recommendations are made from the NAP 4 audit (Cook et al. 2011), which showed that 74% of deaths related to airway issues in the ICU (tube displacement, oesophageal intubation) were associated with the lack of capnography. 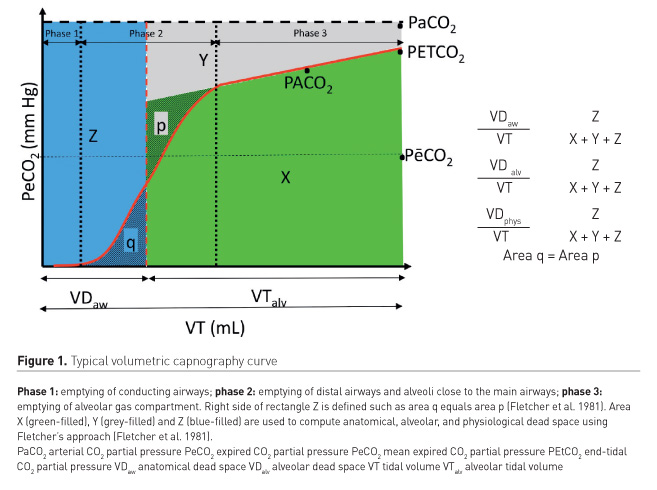 However, VDphys assessed with the Bohr-Enghoff equation overestimates the true VDphys, since venous admixture and low ventilation-perfusion areas increase the difference between PaCO2 and PACO2. It was recently shown that the midportion of phase 3 is a reliable estimator of PACO2 (Tusman et al. 2011), allowing a continuous assessment of true physiological dead space, without arterial blood sampling, using Bohr’s original equation, as follows:

VDphys Bohr as assessed by volumetric capnography has been shown to be closely related to dead space measurement using the multiple inert gas technique (Tusman et al. 2011), and is not impacted by the effect of shunt or low ventilation-perfusion areas.

Finally, plotting the volume of expired CO2 as a function of expired tidal volume allows computation of VDalv (Fletcher et al. 1981) and alveolar ejection volume (Romero et al. 1997), defined at the predicted point where alveolar emptying begins (Figure 2), as an attempt to better quantify phase 3 of the volumetric capnography curve.

The following clinical applications of volumetric capnography have been reported:

However volumetric capnography presents the following limitations: measurement errors due to air leaks (e.g. during noninvasive ventilation) or obstruction of airway adaptor by secretions or condensation droplets, requirement of sufficient expiratory time in order to allow complete CO2 exhalation, deviation from the ideal 3 phases curve in some clinical situations, dependency to ventilatory settings etc. 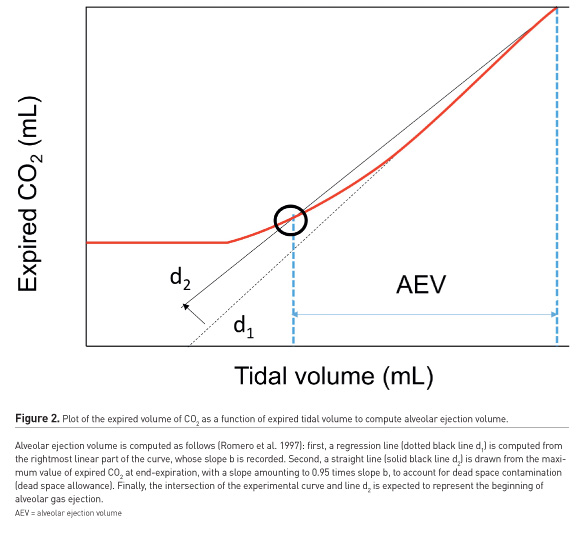 PEtCO2 can be used as a surrogate of PaCO2, e.g. after changing ventilatory settings, assuming the PEtCO2-PaCO2 gap remains constant over time (i.e. hypothesising that the dead space remains constant). It was shown as a cost-effective intervention (Rowan et al. 2015) with a reduction of a third of blood gases analyses and a saving of $880,496 over 6 months in an American paediatric ICU. In specific populations where tight control of PaCO2 is important (e.g. patients with brain injury), PEtCO2 monitoring can be useful as it allows a continuous noninvasive estimation of PaCO2. It should, however, be stressed that interventions that can alter dead space (e.g. bronchodilators, major change of PEEP level and so on) should prompt the verification of the PEtCO2-PaCO2 gap. Furthermore, it may be unsafe to use only PEtCO2 for the setting of the ventilator, given that some patients with unknown enlarged PEtCO2-PaCO2 gap might suffer from severe iatrogenic hypercapnia.

First, as described above, it can confirm the correct placement of an endotracheal tube. Second, capnography may assess the quality of cardiac resuscitation, which is correlated with the PEtCO2 level, since PEtCO2 is related to cardiac output. Hence it is recommended (Paiva et al. 2018) to achieve a PEtCO2>20 mmHg during resuscitation. Third, capnography may help to detect the return to a spontaneous circulation if a sudden rise of PEtCO2 occurs. Fourth, initial low values or failure to maintain “correct” values of PEtCO2 are associated with worse outcome (Levine et al. 1997), and may help the decision to terminate resuscitation or help to triage patients with refractory cardiac arrest eligible for extracorporeal life support (Conseil français de réanimation cardiopulmonaire et al. 2009).

As PEtCO2 is highly correlated to CO and monitored on a breath-by-breath basis (Weil et al. 1985), it may be used as a surrogate for continuous cardiac output monitoring over short periods, assuming CO2 production and elimination remain constant. In this connection, some authors recently investigated whether PEtCO2 variations could be used to track CO changes related to change in cardiac loading conditions (Monnet et al. 2012). In a study on 65 mechanically ventilated patients with acute circulatory failure, PEtCO2 increased by at least 5% during a passive leg raising manoeuvre predicted fluid responsiveness with 100% specificity and a sensitivity of 71%. For patients under veno-arterial extracorporeal membrane oxygenation (ECMO), PEtCO2 might reflect transpulmonary (or native) cardiac output. Naruke et al. (2010) reported that patients that were successfully weaned from veno-arterial ECMO exhibited a rise of PEtCO2 of at least 5 mmHg after reduction of ECMO flow, which was interpreted as a rise of native CO. If confirmed, this method could allow a more precise screening of patients who could be safely weaned from ECMO.

CO can be measured noninvasively with the differential Fick method, using measurements of CO2 elimination (VCO2) and PEtCO2 on a breath-by-breath basis before and during a CO2 rebreathing manoeuvre (Jaffe 1999). Since cardiac output is computed from expired CO2, blood flow from non-ventilated lung regions is not accounted for and a correction for shunt fraction has to be performed using arterial oxygen saturation assessed by a pulse oximeter and an iso-shunt diagram (Rocco et al. 2004). The NICO® system is a commercially available device based on this technique, using a rebreathing loop controlled by a pneumatic valve inserted at the Y-piece level. This technique has an acceptable reliability (Gueret et al. 2006) in cardiac surgery patients, but a lack of reliability in conditions of high intrapulmonary shunt (Rocco et al. 2004). In addition, the technique is hampered by several additional limitations: CO monitoring is not continuous (1 measurement every 3 minutes) making the technique unsuitable to assess fluid responsiveness by the passive leg raising test or other postural tests (Yonis et al. 2017); the technique is contraindicated in patients requiring strict control of PaCO2 (e.g. brain-injured patients); haemodynamic and respiratory instability (with rapidly changing VCO2 between the basal and rebreathing phase) may decrease the reliability of the CO measurement. The ideal patient for this technique would be mechanically ventilated, with no active breathing and no pulmonary disease, which probably makes the technique suitable for intraoperative monitoring.

As highlighted in the introduction, PEtCO2 is highly correlated to VCO2. The analysis of VCO2 and oxygen consumption (VO2) allows estimation of the energy expenditure, through indirect calorimetry (Oshima et al. 2017). This method is the gold standard for the estimation of the daily nutrition needs in the ICU, and is now implemented in some ICU ventilators. However, to be accurate, indirect calorimetry should be done under respiratory and haemodynamic stable conditions, in aerobic condition, and with FiO2 below 60%. Some authors have proposed a new estimation of energy expenditure using only VCO2 assessed by a commercial ventilator (Stapel et al. 2015), by computing respiratory quotient of the administered nutrition using the Weir formula to compute VO2 (Weir 1949). The reliability of this method was acceptable, with a less than 10% overestimation of energy expenditure. Whatever the method to determine energy expenditure, no study has, to date, explored the impact of its use on ICU outcome as compared to traditional predictive equations including anthropometric parameters.

The use of PEtCO2 for intrahospital transport mechanically ventilated patients is highly recommended in the United Kingdom and in selected patients in France (Intensive Care Society 2016; Quenot et al. 2012). This recommendation is based on the frequency of airway related adverse events (hypoxia, extubation, ventilator failure etc.). As for the intubation procedure, strong evidence is lacking, and recommendations are based on observational studies and expert opinions.

In this review, we have highlighted the possible applications of capnography in the ICU. The versatility of this tool also makes its frailty. However, it often requires that the patient is haemodynamically stable, passively ventilated, with no change in energy expenditure. ICU patients do not fulfil these criteria most of the time. Finally, we are lacking studies showing improvement of critically ill patients’ outcome by using any of the CO2 monitoring tools. Whether this statement will remain true in the future depends on the will of critical care teams to embrace this technology, study it, and ultimately... use it!

Advanced haemodynamic monitoring methods   Bernd Saugel, MD, EDIC is a Professor of Anesthesiology and works as a consultant... Read more

The Future of Haemodynamic Monitoring: From Planet Mars to Resource Limited Countries

When envisioning the future of haemodynamic monitoring, we cannot limit the discussion to new sensors and computer innovations.... Read more

Critical Care Medicine has existed for many years, but was only recognised as a specialty in the last 40 years or so. However,... Read more

In this article we focus on the evidence of whole-body ultrasonography used for hypotension or shock. We first highlight individual... Read more

A critical care pharmacist’s perspective and advice on medication safety around sedative and analgesic therapy in the... Read more

How to manage severe dengue infection

A review of diagnosis and treatment of dengue, a mosquito-borne febrile illness caused by flavivirus with a clinical spectrum... Read more