Share
Download PDF Back
Kristoffer Strålin, MD, PhD, is Associate Professor and Senior Consultant at the Department of Infectious Diseases, Karolinska Institute, Stockholm, Sweden. Karolinska Institute is a world renowned medical university, which has the mission of improving people’s health through research and education. Together with Karolinska University Hospital, it is a leader in healthcare developments and medical breakthroughs. The hospital has recently installed the IRIDICA system, a laboratory diagnostic platform that uses PCR/ESI-MS technology, and is now using it for routine testing. Physicians in any part of the hospital can electronically order IRIDICA testing for their patients.
What is your experience with PCR/ESI- MS technology used by the IRIDICA system?
Following two studies on bronchoalveolar lavage (BAL), we are now using the IRIDICA system in routine practice, on blood samples and tissue samples in addition to BAL. In the first BAL study, we looked at the performance of broad-range detection of bacterial DNA with the IRIDICA BAC LRT assay applied on BAL fluid in mechanically ventilated patients with pneumonia (Strålin et al. 2015). We obtained 59 BAL samples from consecutive mechanically ventilated patients in the intensive care unit (ICU). Thirty-two patients (median age 49 years, range 0-79 years) had pneumonia. The median ICU time prior to bronchoscopy was three days.  IRIDICA was run on 0.1 mL of BAL fluid. Compared with BAL culture, IRIDICA showed specificities of >87% and negative predictive values of ≥90% for all individual pathogens. The overall sensitivity was 77% (10/13). In patients without prior antibiotic therapy, the method had low additive value. However, IRIDICA was significantly more positive in patients with prior antibiotic therapy.
In the second study, which we presented at the European Congress of Clinical Microbiology and Infectious Diseases in April 2015 (Ullberg et al. 2015), we compared the performance of the IRIDICA system to conventional culture. During summer and autumn 2014, 0.1 mL from 91 consecutive routine BAL samples received at the clinical laboratory were analyzed using the IRIDICA BAC LRT assay. The results are shown in Table 1. As can be seen, for S. pneumoniae and S. aureus, considerably more positives were detected by IRIDICA.
For which additional patient groups are you using the PCR/ESI-MS technology?
We are currently collecting blood samples for IRIDICA to be tested in a study in conjunction with our intensive care unit (ICU). We will collect blood samples from all patients with suspected sepsis. We have collected samples from 12 January 2015 and will continue until 11 January 2016. We are three-quarters of the way through the year and have collected samples from more than 250 patients who have suspected infection on ICU admission.
From the studies you have conducted on the technology to date, what were the key findings?
We found a reasonable amount of samples, as shown in Table 1, where IRIDICA was positive, but the culture was negative. In one of our studies (Strålin et al. 2015), we had 10 cases in which IRIDICA on BAL was positive, where BAL culture yielded negative results, probably due to antibiotic treatment prior to specimen collection.
IRIDICA appears to be a good complement to culture, especially when the patient has taken antibiotics prior to sampling.
In your opinion, what is the key value of the PCR/ESI-MS technology?
It is a key advantage of the PCR/ESI-MS technology that it is more rapid. You can get results at a high speed. More important even than speed is the possibility to detect pathogens that culture does not detect. In particular, if antibiotics are given, culture can give a false negative result; however IRIDICA has the potential to detect the pathogen. IRIDICA is capable to detect multiple pathogens in those patients with polymicrobial infections. It can also find ‘exotic’ pathogens, for example the case of Legionella pneumophila (see Table 1). 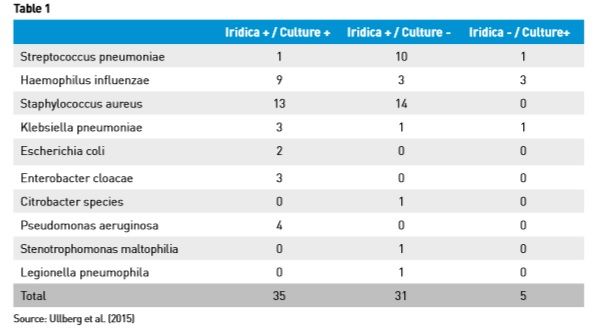 Would you share and describe for us a patient case where IRIDICA could or has made a difference?
One good example is a 66-year-old woman with breast cancer, who was admitted for fever. She had a systolic murmur at heart auscultation. Samples were collected for blood culture and IRIDICA on whole blood. Since she was clinically stable, she did not receive any antibiotics on the first day. However, the day after she was admitted (day 2), IRIDICA was positive for Enterococcus gallinarum and blood culture was positive for Gram positive cocci in short chains. Based on these results, antibiotic treatment with piperacillin/tazobactam was initiated. Ultrasonography showed endocarditis of the aortic valve. On day 3, the blood culture isolate was identified as E. gallinarum by standard laboratory methods. For this patient, the IRIDICA findings were used to influence the selection of the antibiotic used to treat the patient.
Which additional patient groups may be of interest to test in your institute?
In the ICU, additional patient groups of interest are immunocompromised patients. For inpatients on the wards, we sometimes have unusual pathogens that are difficult to detect. For those populations IRIDICA is a valuable detection and identification method. It is also useful for patients with joint and bone infections and soft tissue infections, because another advantage of IRIDICA is that it can detect multiple pathogens. We are already using IRIDICA with these patients.

New Antibiotics for Abdominal Infections: What Can We Expect?

Recently a number of new antibiotics or combinations for complicated ‏intra-abdominal infections have been introduced. Here... Read more

Michael Pinsky is Professor of Critical Care Medicine at the University of Pittsburgh, with secondary appointments in Cardiovascular... Read more