All drugs are inherently dangerous. In critical care we give large numbers of particularly dangerous drugs to very sick people, who have little physiological reserve to cope with additional problems. When patients are admitted to or transferred out of critical care we have to transfer complex information about patients’ medications. The staff prescribing and administering medications are often inexperienced and working as part of a team that is attempting to communicate information in difficult circumstances. Staff are also dependent on elaborate and sophisticated technology to ‘help’ them in this process. The complexities of the medication process have also produced some confusing terminology, which is defined in Table 1. Faced with these problems we have to do all that we can to minimise the risks associated with medications. We will never make medications completely safe. Medication safety is a continuous process of improvement and learning. 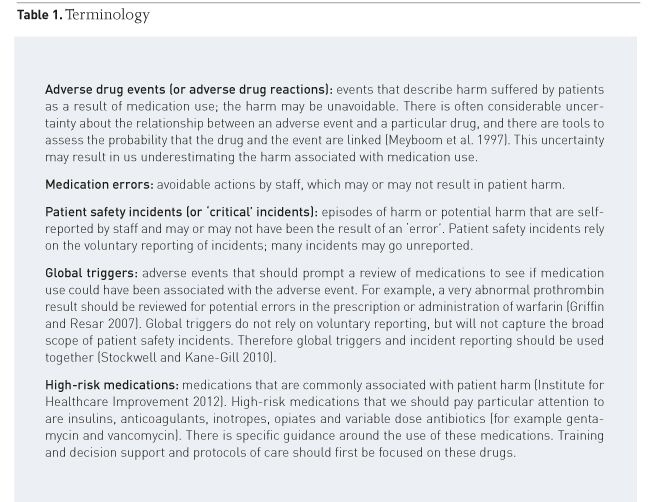 Improving medication safety has been the subject of considerable research and investment. Before describing the details of specific actions it is important to note that the general safety culture of a unit will strongly influence patient safety within the unit (Kho et al. 2005). This culture is dependent on the quality of management in the unit (Morello et al. 2013). Getting management right will be essential in promoting medication safety. There should also be a structured review of all the medications on each consultant ward round, as all medications are potentially dangerous. Structured rounds (Lane et al. 2013) and clear ward round goal setting (Pronovost et al. 2003) are essential preconditions for medication safety.

The effectiveness of specific interventions (Figure 1) to improve medication safety has been well reviewed in a recent meta-analysis (Manias et al. 2012). The following interventions have been shown to improve safety:

Involvement of a Pharmacist: The recent core standards issued by the UK Faculty of Intensive Care Medicine (Core Standards Working Party of the Joint Professional Standards Committee 2013) recommend that all critical care units have a competent clinical pharmacist, who will attend consultant ward rounds and be an integrated part of the critical care team. This recommendation is based on evidence (Preslaski et al. 2013; MacLaren et al. 2008). The pharmacist role is relatively new in critical care, and encouraging pharmacists to be fully engaged in ward rounds (Leape et al. 1999) and teaching may be a challenge. A review of the role of the critical care pharmacist stresses the cost saving implications as well as the clinical benefits (Weber et al. 2003). 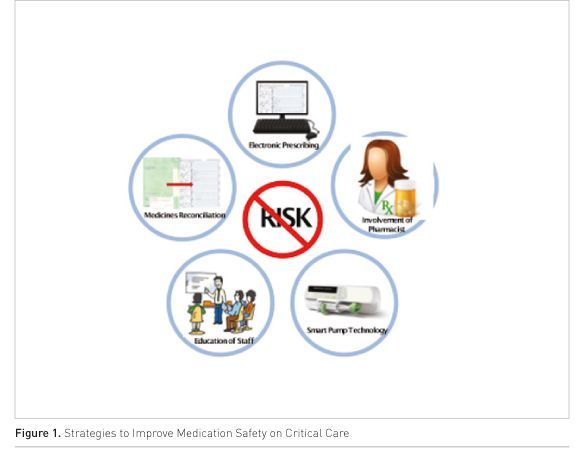 Medicines Reconciliation: Not only are drugs dangerous, but also stopping them precipitously can be harmful, for example beta blockers (Shammash et al. 2001) and statins (Tziomalos et al. 2008). One of the most common prescribing errors identified in a review of patient safety incidents was to prescribe a drug to which the patient was known to be allergic (Thomas and Taylor 2014). Obtaining a drug history in a comatose patient may be challenging, and ensuring all patients have a medicines reconciliation is an organisational challenge. The reconciliation process should be repeated at transfer from critical care; otherwise patients may continue to receive drugs that were only appropriate for the critical care episode (examples reported as patient safety incidents include proton pump inhibitors, clonidine and steroids). There may also be problems with drugs that have complex dosing protocols, for example insulin, gentamycin and vancomycin. These problems can be controlled by structured handovers at all transfers of care (Segall et al. 2012; Pickering et al. 2009).

Education of Staff: Educational theory is clearly outside the scope of this review, but it should be carefully considered before introducing any educational intervention. Interventions that offer specific feedback to individual prescribers reduce prescribing errors (Thomas et al. 2008), and interventions in the workplace are more effective than didactic lectures (Ford et al. 2010). In Greater Manchester we have introduced a multifaceted educational and auditbased programme to reduce the number of prescriptions of medications to which the patient is known to be intolerant to (Greater Manchester Critical Care & Major Trauma Services Network 2015) (Figure 2). Some education can be delivered using e-learning, which removes the immediate requirement for an educator and allows monitoring of the resource usage (Thomas 2013; Thomas 2012). The costs of basic provision of e-learning should be affordable for units willing to invest in the material, but this should be an adjuvant to workplace learning, which does require staff to deliver and receive the training. There are a number of technological interventions that have not shown a reduction in patient safety incidents associated with their introduction (Manias et al. 2012). Failure to show an improvement in patient safety with these interventions may reflect problems with study design, as the interventions were generally studied within weeks or months after introduction. This time period would not allow units to deal with teething problems associated with introducing complex technology. Studies also frequently do not describe the complex technology. Studies also frequently do not describe the complex processes in a unit that should be associated with the introduction of new technology. For example, a study showing lack of benefit with smart pump technology did not use the drug libraries available in the pumps (Rothschild et al 2005). There are also problems with producing interventional studies that are adequately powered to detect reduction in harm when the harm is relatively uncommon (Black 1996).

Examples of technological innovations that have not been proven to improve medication safety include:

Electronic prescribing: Electronic prescribing removes many prescribing errors connected with poor handwriting, lost charts and dosing errors, but it allows other errors. Review of patient safety incidents (Thomas and Taylor 2014) suggests the most common problems are associated with the transfer of drug information where a unit uses a different system to the rest of the hospital. Incidents also clearly increase in the time that a new system is introduced, and the introduction of electronic prescribing should be properly supported. There are also ongoing issues with medications discontinuing at their stop dates without being reviewed and drugs remaining on the system after they are no longer required.

Smart pump technology: Pumps that have libraries of drugs that then limit the potential rates of infusion to safe levels, clearly display the drug being infused, and use specific barcoding of syringes so that only the correct drug can be infused, should on face value improve medication safety. Unfortunately there is a lack of evidence for the effectiveness of these interventions (Manias et al. 2012). This lack of evidence may be because, in some studies evaluating this technology, the technology was not actually being used as it should have been (Rothschild et al. 2005). The methods used to introduce this technology are also complex and involve training large numbers of staff. Patient harm associated with mis-setting of pumps is very important for a few patients, but it is difficult to detect a change in the rates of these uncommon events with randomised trials. Regardless of the evidence of benefit, it is clear that manufacturers are going to continue to develop this technology. When choosing this technology it is essential to consider the ergonomic design of the pump to check that staff are going to be able to understand how to use it. It would also be helpful to be able to assess a pump being used in another unit before deciding to purchase it. It is also important to clearly define the assistance the supplier will provide in training and to define how you will introduce the new technology safely.

We have reviewed patient safety incidents reported from most critical care units across the North West of England since 2009, described the broad classification of these incidents (Thomas and Taylor 2012), and reviewed incidents specifically associated with medications (Thomas and Taylor 2014). These reviews have shown that medication incidents represent the largest number of incidents that are clearly preventable, and that incidents that are preventable are as likely to be associated with harm as other incidents. The reviews also suggested that the rate of reporting of medication incidents per thousand patient days was ten times higher in some units than other units. This variation seemed to be independent of the type of unit or the network in the North West; significant variation without a clear explanation suggests that there is scope for quality improvement in many units (Tomson and van der Veer 2013). Most incidents associated with patient harm result from problems with the prescription or administration of medicines. With respect to prescription problems the most common problems were not prescribing medications that were indicated, not prescribing according to the British National Formulary and not prescribing according to unit protocols. This suggests that providing drug information to prescribers and improving the provision of information about drugs, particularly information about local protocols, would improve medication safety. The use of forcing functions, for example standard prescriptions, would presumably also help compliance with local protocols. With respect to administration, most common problems were associated with the incorrect checking of medications. This may in part be because the role of the second checker has not always been clearly defined; without this definition the second checker could result only in causing the first checker to stop concentrating on the checking process (Armitage 2008).

The drugs most commonly involved were drugs already described as high-risk medications, so confirming that efforts to improve medication safety should concentrate on these drugs. With insulin the most common cause of hypoglycaemia was a failure to adjust the insulin infusion rate or provide alternative calories when enteral feed was interrupted (Thomas and Taylor 2014). Incorrect selection of arterial flush solutions with the potential for inaccurate measurement of blood glucose (Leslie et al. 2013) continued to be reported into 2014.

In summary medications are dangerous and should be stopped as soon as they are no longer needed. Reducing harm from medications requires units to develop a safety culture that encourages continual learning from episodes of harm. Improvement requires investment in systems of care and consistent ways of working. The engagement of pharmacists in this process is critical and is more evidence-based than investment in expensive technology.

Thomas AN, Taylor RJ (2014) An analysis of patient safety incidents associated with medications reported from critical care units in the North West of England between 2009 and 2012. Anaesthesia, 69(7): 735-45.

Brazil is the largest country in South America, and ranks fifth in the  ‏list of the most populous countries, with a population... Read more

Social Media in the “Real” World Social media is all around us, and enables real-time communication with patients, families and... Read more

Centre for Research in Intensive Care

The Centre for Research in Intensive Care (CRIC) was established in 2015 to provide support and services for research into intensive care,... Read more

Don't Forget to Ask! The Patient and Relative Perspective

There has been good progress in the last decade to ensure that the patient voice is heard at all levels, including in research... Read more