Defining the Role of the Intensive Care Unit

This review article aims to alter the preconceived mindset that surrounds the intensive care unit (ICU) and the patient with an acute ischaemic stroke (AIS). A contemporary body of evidence is emerging that shows that specific interventions can improve outcomes, and this article highlights key evidence-based strategies in AIS management. More importantly, it focuses on the broader management facets such as the standards of AIS care, stroke care pathways and indications for ICU admission. When compared with other serious ICU diagnoses such as severe sepsis and long term ventilation, the outcome of AIS patients on ICU compares well. This comparison should shake the historical reluctance that surrounds admission of stroke patients to ICU.

Stroke is the second largest contributor to mortality worldwide. Its devastating consequences are also a major contributor to morbidity, especially in high-income countries, where it is a leading cause of years of life lived with disability (Lopez et al. 2006). Historically, acute ischaemic stroke (AIS) was largely seen as an irreversible condition with reports previously suggesting no significant reduction in morbidity and mortality following intensive care unit (ICU) admission (Drake et al. 1973; Kennedy et al. 1970). Modern-day paradigms have changed however with an established, contemporary body of evidence showing that specific interventions can improve outcomes. As a consequence, thresholds for admitting AIS patients to ICU to support these interventions, and their potential complications, are falling. A recent analysis of 31,301 AIS patients admitted to hospital in the eastern half of the United States showed that 26% required ICU admission at some stage (Golestanian et al. 2009). Despite this, there seems to be a lack of widely accepted indications for admission to the ICU and evidence for management thereafter.
Standards of Care and Stroke Care Pathways
Management of acute stroke is complex. Interventions such as prompt diagnosis, consideration for thrombolysis, correction of deranged physiology and secondary prevention must be coordinated in a timely fashion. Care pathways assist healthcare professionals in making clinical decisions according to the best available evidence, thereby improving patient care and reducing variation in clinical practice. Their place in the acute management of AIS has therefore become commonplace. Some of the typical components of an AIS care pathway include (Intercollegiate Stroke Working Party 2012; National Collaborating Centre for Chronic Conditions (UK) 2008):
• If indicated, “immediate” brain imaging (ideally the next slot and definitely within one hour);
• If indicated, thrombolysis with alteplase within 4.5 hours;
• Direct admission to a specialist acute stroke unit;
• Antiplatelet treatment to start as soon as possible, and certainly within 24 hours.
The evaluation of care pathways in acute stroke is complicated however, given regional variability in content and delivery. A recent Cochrane review (Stroke Unit Trialists’ Collaboration 2013) looked at the use of care pathways in acute stroke management and rehabilitation. Of the 15 studies, which included more than 4,000 patients, only three were randomised. The primary outcome measures of death and dependency at discharge showed no clear benefit with the use of care pathways. Mindful that non-randomised studies are susceptible to biases and clinical studies of care pathways are open to confounding, this Cochrane review still suggests that the benefits of AIS care pathways are not proven.
If care pathways are to succeed, they are only likely to improve standards of care if implemented in specialised stroke units. Such units confer a clear morbidity and mortality benefit over general medical care and should form the standard of care. This benefit does not seem to be limited by age, sex, type or severity of stroke (Stroke Unit Trialists’ Collaboration 2013).
Where such units exist, cohesive multidisciplinary input ranging from paramedics and emergency physicians through to stroke specialists, interventional radiologists and surgeons are key to drive standards set in the care pathway. Intensivists are playing increasing roles within these teams, ensuring that provision of optimal organ support and specialised nursing care continue in parallel to other ongoing stroke management. The delay in transfer of critically ill stroke patients from the emergency department to the neurointensive care has been shown to be an independent indicator of poor outcome at hospital discharge (Rincon et al. 2010).
Appropriate training tools can also improve standards of acute stroke care. Simulation-based models have been used to improve utilisation of thrombolysis by helping to identify barriers along care pathways (for example picking up delays in ambulance transfers) and provide solutions for these (for example the scoop-andrun protocol) (Lahr et al. 2013). NavarreteNavarro et al. (2012) also showed that the introduction of a training model (e-learning course, lectures and workshops) focusing on therapeutic and organisational aspects of AIS management led to improved knowledge of emergency and critical care physicians and formed part of the regional strategy on stroke management, leading to increased uptake of thrombolysis in the region.
Indications for ICU Admission
The decision to admit an AIS patient to ICU is often to improve/support blood flow to the ischaemic penumbra. This is achieved through reperfusion therapies, optimisation of neuroprotective strategies and the support of other organs during neurological recovery. Other indications include prevention, early detection and treatment of complications and the need for close monitoring. Before making a final decision on appropriateness for admission, prior co-morbidity, cognitive and functional status and personal wishes should also be taken into consideration.
Accurate neurological prognostication is central to the decision to admit, but is notoriously difficult. Detailed history taking, thorough examination and appropriate imaging are key, but may not predict for all. Stroke mimics such as psychogenic disorders, hypoglycaemia, seizures, complicated migraine, encephalopathy, central nervous system mass lesions and drug toxicity need to be excluded. Neurological prognostication is near to impossible during the acute phase and is more accurately determined through repeated assessments temporally, involving regular discussion between ICU and stroke physicians (Kirkman et al. 2014).Therefore the American Stroke Association recommends aggressive treatment and postponement of “Do Not Attempt Cardiopulmonary Resuscitation” (DNACPR) orders for at least the first 24 hours (Jauch et al. 2013).
Kirkman et al. recently reviewed current AIS guidelines and produced recommendations on indications for ICU admission as shown in Table 1 (Kirkman et al. 2014). While patients with AIS, decreased level of consciousness and a National Institutes of Health Stroke Score (NIHSS) > 17 on admission are thought to have a poor prognosis, exceptions exist, such as the response seen by cerebellar infarcts to sub-occipital craniectomy (Kirkman et al. 2014; Wijdicks et al. 2014). The relationship between stroke severity and outcome should be observed with caution as patients with more severe deficits will inherently have the most to gain from treatment, especially when compared with mild strokes where death or severe disability have been used as the primary outcomes of research (Stroke Unit Trialists’ Collaboration 2013). 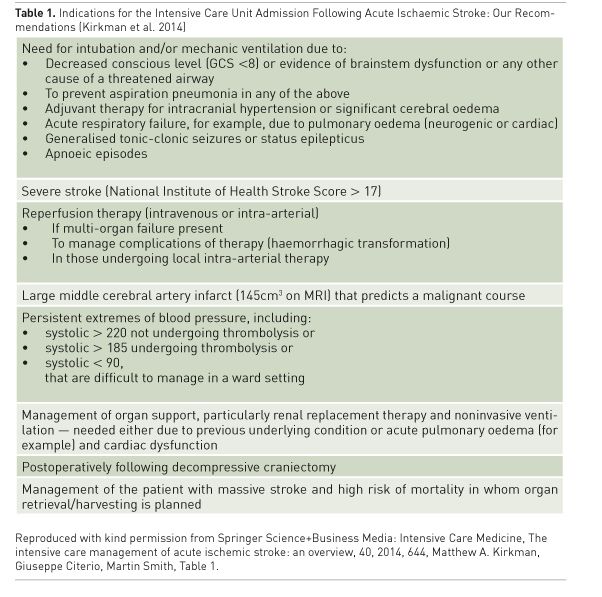 The need for respiratory support is one of the more common causes for ICU admission in patients with AIS. While the literature is not clear, a few small trials indicate that patients who are intubated and ventilated for neurological deterioration (coma) and respiratory deterioration do not do as well as those who are intubated and ventilated for potentially reversible causes such as seizure management or prevention of aspiration pneumonia (Burtin et al. 1994; Leker and Ben-Hur 2000; Meyfroidt et al. 2014; Steiner et al. 1997; Wijdicks and Scott 1997).
Therapeutic Strategies in AIS Management

CLOTS (Clots in Legs Or sTockings after Stroke) Trials Collaboration, Dennis M, Sandercock P et al. (2013) Effectiveness of intermittent pneumatic compression in reduction of risk of deep vein thrombosis in patients who have had a stroke (CLOTS 3): a multicentre randomised controlled trial. Lancet, 382(9891): 516–24.

Intensivists today are faced with a growing deluge of quantitative data, along with demands to implement evidence-based protocols... Read more

A Roadmap to Rapid Improvements in Patient Safety This article will provide an overview of how to accelerate adoption of... Read more

Dietitians in Critical Care - A Fundamental and Evolving Role

Nutrition in Critical Care Patients in the critical care setting are at risk of malnutrition (Heyland et al. 2011). The provision... Read more

Defining the Role of the Intensive Care Unit This review article aims to alter the preconceived mindset that surrounds the... Read more

Delirium (acute brain dysfunction) can be a complication of critical illness. Brain organ dysfunction can manifest as a... Read more