How Should We Manage Sedation in Critically-Ill COVID-19 Patients?

The Choosing Wisely top five guidelines published a few years ago by the Chest Association of Physicians, the American Thoracic Society, the Society of Critical Care Medicine, and the American Association of Critical Care Nurses state that mechanically ventilated patients should not be deeply sedated without a specific indication and without daily attempts to lighten sedation (Halpern et al. 2014).

This is a very important recommendation, especially when discussing sedation in critically-ill COVID-19 patients.Findings from a landmark study published by the Chicago Study Group 20 years ago showed that if daily sedation is interrupted in mechanically ventilated patients, the duration of mechanical ventilation can be shortened (Kress et al. 2000).

The most recently published guidelines from 2018 recommend a checklist. The first step is to make sure that mechanically ventilated patients are not in pain. Pain should be measured using appropriate scales, and pain management should be initiated with intravenous opioid drugs but also non-opioid analgesics to spare the excessive use of opiates. The most commonly used scale is the Behavioral Pain Scale (BPS) that ranges from 3 to 12, 3 representing a patient with no pain at all and 12 being a patient experiencing very intense pain. 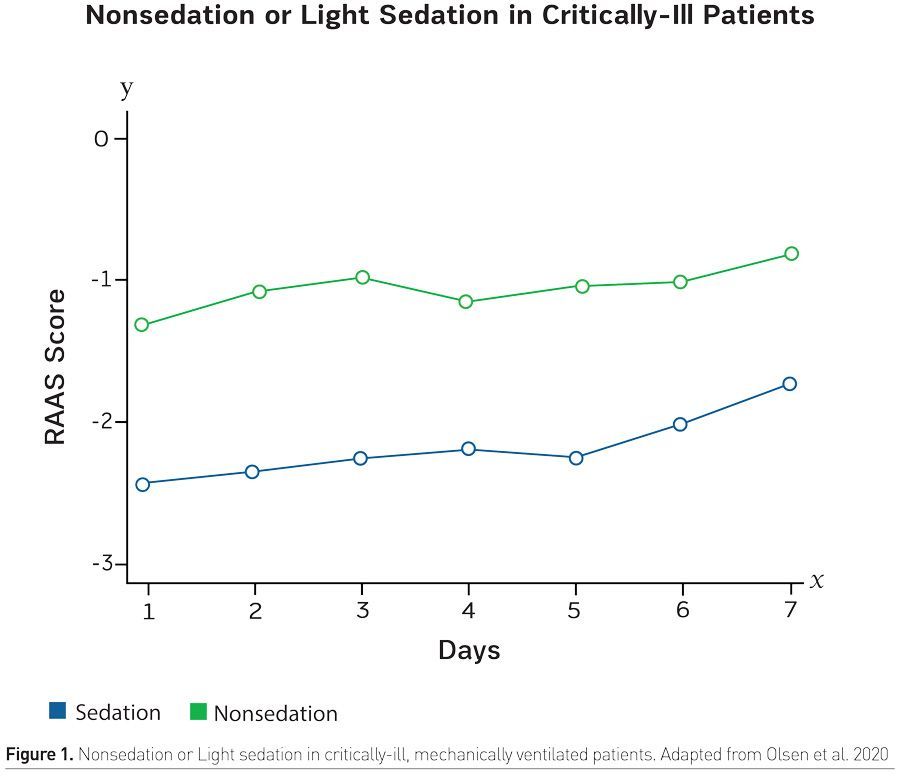 The next step, once the pain is treated, is sedation. The 2018 guidelines suggest that light sedation and not deep sedation should be used in critically-ill mechanically ventilated adults. Light sedation is associated with a shorter duration of invasive mechanical ventilation and reduced tracheotomy rates (Devlin et al. 2018).

In a multi-centre study, authors showed that most of the patients were deeply sedated in their first 48 hours of the ICU stay. However, this proportion decreased with time. In this study, deep sedation was associated with a longer time to extubation and a lower survival rate. Deep sedation was also associated with a higher mortality rate three months after the ICU stay (Shehabi et al. 2012).

In a randomised trial published in 2020 in the New England Journal of Medicine, the authors showed that no sedation or light sedation could be performed in many patients admitted to the ICU, those who are mechanically ventilated and even with pneumonia or ARDS (Olsen et al. 2020). As shown in Figure 1, results from the study show that in the light sedation group, the mean RASS score was between -2 and -3 in most patients. An important thing to note is that in these ICUs in Scandinavia mostly, the patient to nurse ratio was 1:1, meaning that the nurses were readily available to make sure that the patient wouldn't self-extubate or be at risk of severe agitation. 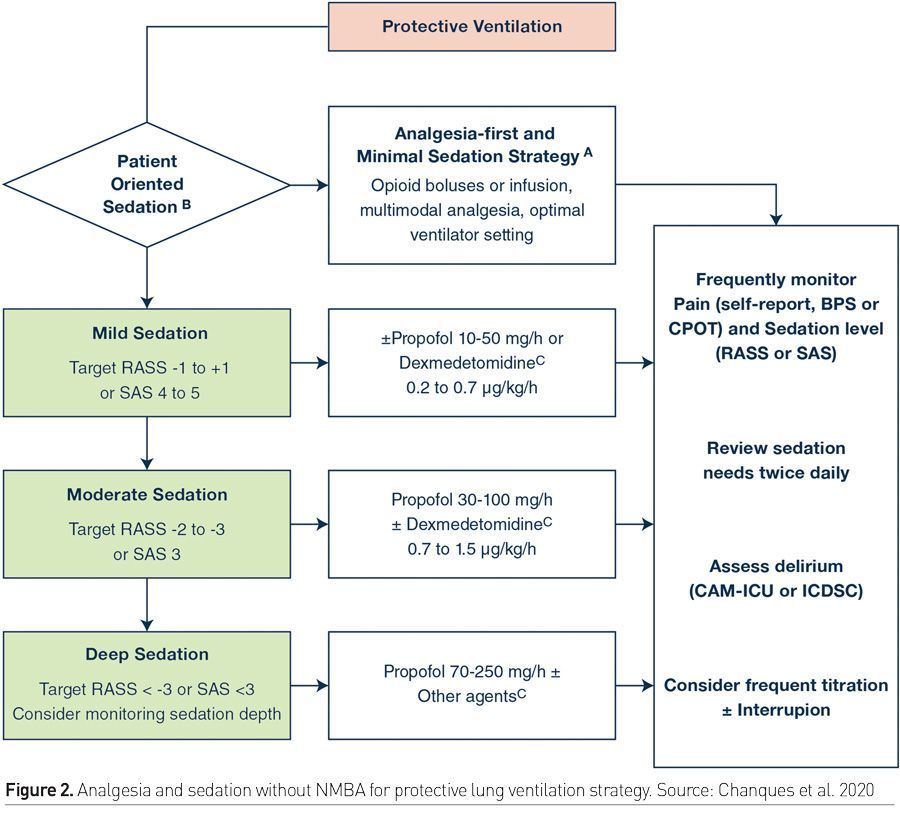 Which Drugs Should Be Used?

ARDS is one of the few indications of deep sedation. Deep sedation can be defined by a RASS score between -4 to -5 (Devlin et al. 2018). Some of these patients may need neuromuscular blocking agents (NMBA) to treat ARDS. Findings from a landmark study published in France ten years ago in the New England Journal of Medicine show that Cisatracurium, which is one of the most commonly used NMBA, is associated with better survival compared to placebo (Papazien et al. 2010). More recently, the ROSE trial published by the PETAL Clinical Trials Network in the U.S. did not produce the same results. Findings from this RCT, which enrolled 1000 patients showed that light sedation could be performed by day one in almost 30% of ARDS patients. However, none of them were COVID-19 patients (Moss et al. 2019).

With respect to the use of NMBAs in ARDS, the guidelines and recent reviews based on the RCTs suggest that NMBAs should be avoided in ARDS unless there is:

• Severe dyssynchronies despite deep sedation OR

• NMBAs should be reassessed within 24 hours

Another important review published and coordinated by Chanques et al. (2020) summarises how sedation and NMBAs should be used in ARDS patients. According to this review, protective ventilation is the key in ARDS, but if protective ventilation is obtained, it is important to first target mild sedation with almost awake patients using small doses of propofol with or without dexmedetomidine. Moderate sedation should be used if mild sedation is not tolerated by increasing the dose of propofol and dexmedetomidine. Deep sedation should remain at the end of the checklist if the patient is not fully synchronised to the ventilator. Propofol should be used as the first-line drug and then other agents. It is important to keep in mind that some of these patients may need NMBAs even if they are deeply sedated.

Is There a Difference Between COVID-19 Patients and Routine ARDS Patients?

The answer to this question is both yes and no. Yes, because there have been many patients admitted to the ICU for respiratory failure related to COVID-19 disease, generating a very high health care workers workload. Because ARDS is a very classic indication of deep sedation, and in some of these patients, light sedation is not associated with protective ventilation, many of these patients would require deep sedation.

That is why during the pandemic, there have been many deeply sedated patients in ICUs. Also, COVID-19 is a droplet and airborne transmitted disease. Since there have been many patients admitted to the ICU for respiratory failure, generating a very high workload for healthcare workers, and requiring them to wear personal protective equipment, there is a temptation for deeply sedating patients to decrease the risk of incidents such as self-extubation. Because of this high use of sedation during these times and the high flow of patients in severely affected regions, there is a risk of a shortage of deep sedation drugs.

Over the last few months, there have been many reviews and expert opinions, but no comparative studies have been conducted that show that one of these drugs (benzodiazepines, dexmedetomidine, ketamine, volatile sedation, non-opioid analgesics, morphine and other opioids) would be better than the other in COVID-19 patients. Hence, for most clinicians, the strategy has been to follow local policy as well as make decisions based on the availability of drugs. Some of these drugs, such as volatile sedation, are under investigation in ARDS. There is an ongoing RCT in France where intravenous sedation drugs are compared to volatile sedation to see whether volatile sedation would be associated with better outcomes (Ammar et al. 2021; Adams et al. 2020).

COVID-19 and the Brain

One particularity of the COVID-19 disease is that the hippocampus is one of the targets of the virus generating a local inflammatory brain response. There is also a possible brain invasion of the virus through olfactory nerves and systemic acute brain injury related to hypoxia, inflammation, and endothelialitis.

All these pathophysiological pathways lead to cognitive impairment and a high risk of ICU-associated delirium. Recovery times are not yet known, but may be prolonged. No study so far has reported the need for higher doses of sedative drugs in ARDS patients with or without COVID-19 disease.

In conclusion, severe COVID-19 patients may need deep sedation and NMBAs but the goal should always be to target light sedation once we make sure that mechanical ventilation is lung and muscle protective.

Wellbeing in the ICU

H ealthcare workers across the world have been facing significant challenges due to the COVID-19 pandemic. In particular,... Read more

During the first year, the ICU director should take a snapshot of the ICU situation and invest time and resources to acquire... Read more

Prone Position in Awake, Non-Intubated Patients with ARDS: From Physiology to the Bedside

Rethinking Critical Care - Use and Challenges of Artificial Intelligence

The COVID-19 pandemic has had a significant impact on ICUs and critical care healthcare providers all across the globe. As of... Read more