Excessive bleeding is a common complication in cardiac surgery, and may result in the need for red blood cell (RBC) transfusion. Intraoperative bleeding during cardiac surgery is often treated with coagulation factor concentrates (CFCs). As yet, however, their efficacy has not been conclusively determined.

Since 1980 our knowledge of damage from transfusion has increased. Risks include infection, effects on the immune system, transfusion-related acute lung injury and risks due to the age of transfused blood (Isbister et al. 2011). Healthcare systems need to also be aware of the associated costs. As doctors it is our challenge and duty to reduce preventable damage from blood transfusion.

The evidence-based multidisciplinary approach to optimising care of patients who may need transfusion is known as patient blood management (PBM). We know there is considerable variation in perioperative blood transfusion rate. For example, an analysis of 102,470 patients who underwent coronary artery bypass graft surgery at 792 hospitals in the United States found that rates of blood transfusion ranged from 7.8% to 92.8% for red blood cells (Bennett-Guerrero et al. 2010). PBM can also reduce the need for blood transfusions. In cardiac surgery, a study of Jehovah’s Witnesses, who refuse blood products, found no difference in morbidity and mortality if patients are evaluated with a multidisciplinary approach to blood management (Moraca et al. 2011).

The primary outcome of the study was intraoperative blood loss measured between intervention and closure of the chest when surgery ended. Secondary outcomes included the measured blood loss at 1, 3, 6,12 and 24 hours after the intervention; the proportion of patients who received transfusion; and number of units of RBCs, FFP or platelet concentrate.

The aim was to achieve surgical haemostasis after heparin reversal. It was the surgeons’ decision when to start the 5-minute bleeding time. Once patients had bled for 5 minutes they were entered into the treatment algorithm if they were bleeding >60 mL and <250 mL. The intervention was considered to have started on initiation of infusion of the study medication (Figure 1).

Over the four years of the trial, over 700 patients had complex cardiac surgery, of which 40% were eligible for the trial. Of the eligible patients, 43% did not agree to participate; 203 patients agreed to participate, of which 73 (36%) experienced no intraoperative bleeding and 10 were excluded for other reasons. We suggest that the high number of patients that experienced no intraoperative bleeding may be due to the Hawthorne effect—performing differently when being observed. This group of patients had very extensive surgical haemostasis before we started with the 5 minutes bleeding time, much longer than usual. The surgeons may have perceived that they were a better surgeon if they were not included in the trial, and also that after closure of the chest the microvascular bleeding was now the problem for the anaesthesiologist.

The patients were randomised to receive either the placebo or the intervention drug in doses between 60ml and 250ml. The fibrinogen doses were calculated based on plasma fibrinogen levels at the end of cardiopulmonary bypass measured using the Clauss method (Figure 2). 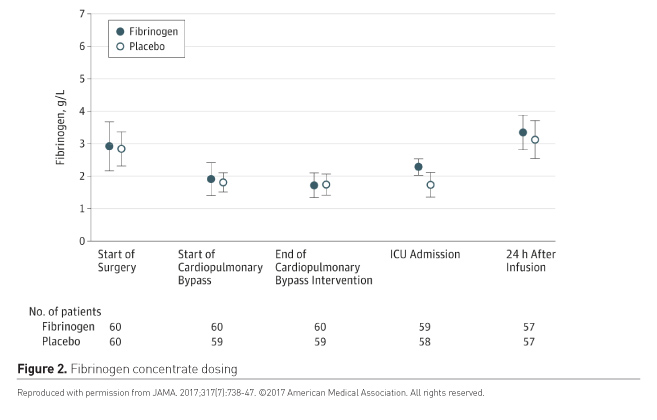 Among patients with intraoperative bleeding who received infusion of fibrinogen concentrate, compared with placebo, there was no significant difference in blood loss measured from the time of the fibrinogen infusion and chest closure (p = 0.19) (Table 1). 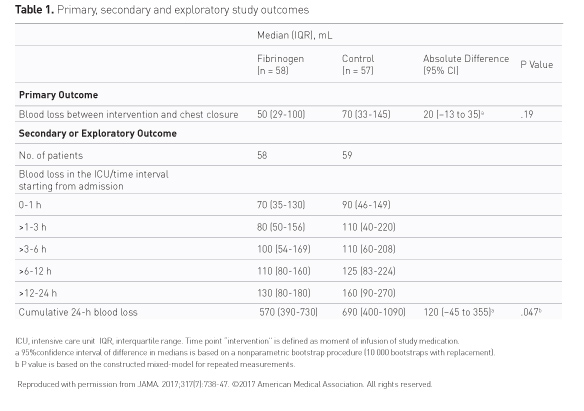 However, other than these times do suggest these were not the best and fastest surgeons ever. This is why the primary endpoint was different than we expected. We expected that the moment there is a bleeding patient everyone would wait for closure and this would lead to a difference in blood loss in the patient and of course a difference in the intraoperative time factor.

There were fewer patients in the fibrinogen group and fewer units of blood units used (Table 2). However, the study was not adequately powered to test the secondary outcomes. The percentage of reduction in transfusion is shown in Figure 3. 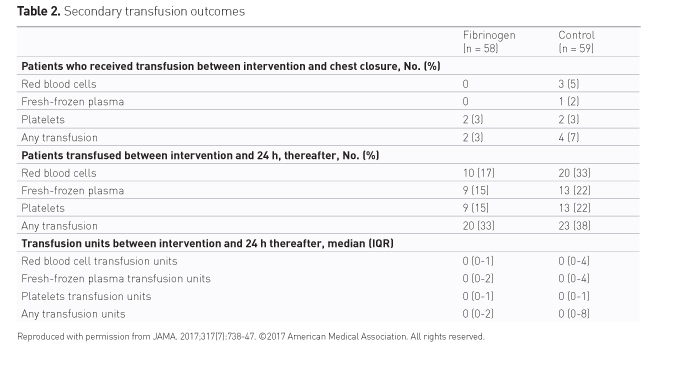 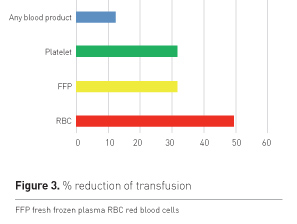 After surgery, a single patient (2%) in the fibrinogen group and 6 patients (10%) in the control group received additional fibrinogen concentrate. This confounds the effect on overall outcomes.

Procoagulants and antifibrinolytics use is shown in Table 3. The percentage of reduction is shown in Figure 4. 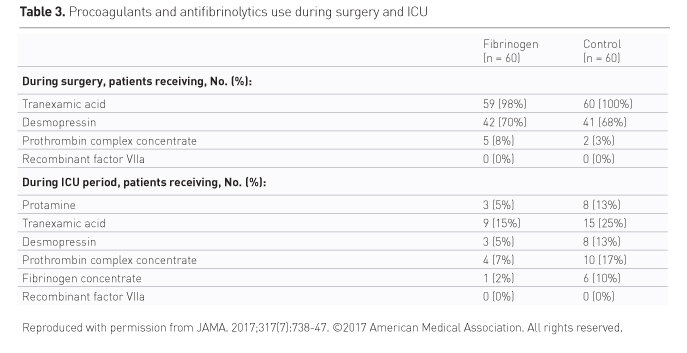 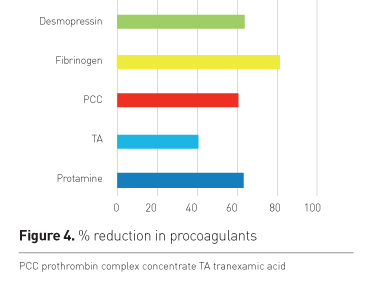 There were more adverse events in the fibrinogen group (Table 4). Two patients died, and 4 suffered a stroke. One patient in the control group suffered a stroke, and one a transient ischaemic attack. The trial was not designed to evaluate major adverse cardiac events and there was no screening for embolic risk aortic disease.

Almost 50% (9/19) of adverse events occurred in two patients (Table 5) (see p. VIII). Also one stroke occurred in a placebo patient with a fibrinogen level of 0.6g/l. 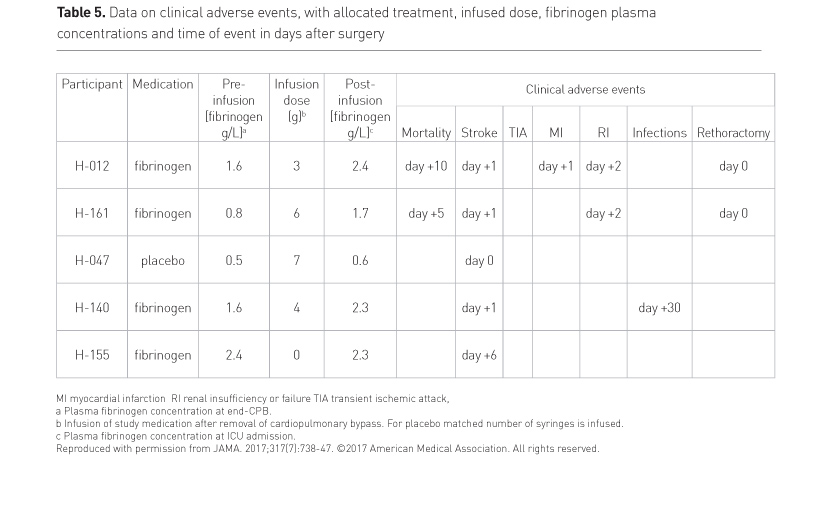 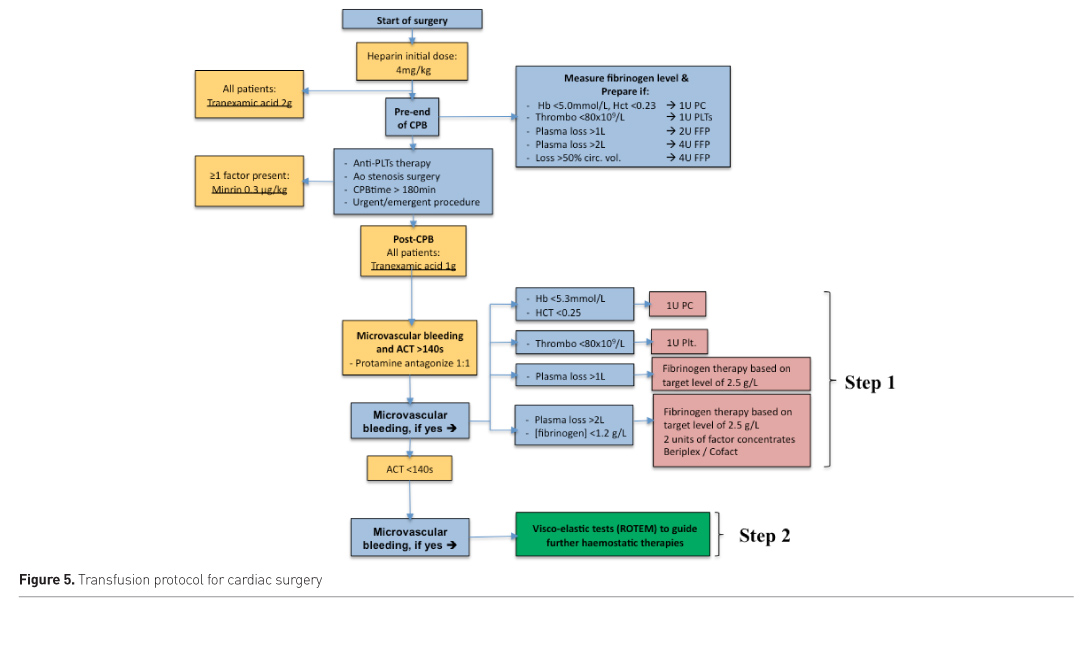 Fibrinogen is effective after complex cardiac surgery in the bleeding patient. Based on the current trial data, fibrinogen is recommended as a first-line therapy with target plasma level 2.5g/L at the moment there is an idea of microvascular bleeding in these patients. Both visco-elostometry as the conventional Clauss method can be used to determine the level of fibrinogen at the end of bypass surgery and to optimise further treatment.

We have the tools and knowledge now to change transfusion management. But changing transfusion management, as with any change, is a major behavioural process. You need to do this together with your own multidisciplinary group, using a change strategy such as the Kotter model (https://www.kotterinternational.com/8-stepsprocess-for-leading-change).

Arno Nierich is the principal investigator for the fibrinogen concentrate trial at Isala Clinics. CSL Behring sponsored the study and donated the bottles of study medication.

Supplement from CSL Behring in collaboration with ICU Management & Practice

A review on the role of vitamin D in a well-defined setting of critically ill patients: patients undergoing cardiac surgery... Read more

Coagulopathy During Cardiac Surgery: The Role of Factor Concentrates

The purpose of this article is to give an up-to-date, comprehensive review on the utilisation of extracorporeal blood purification... Read more