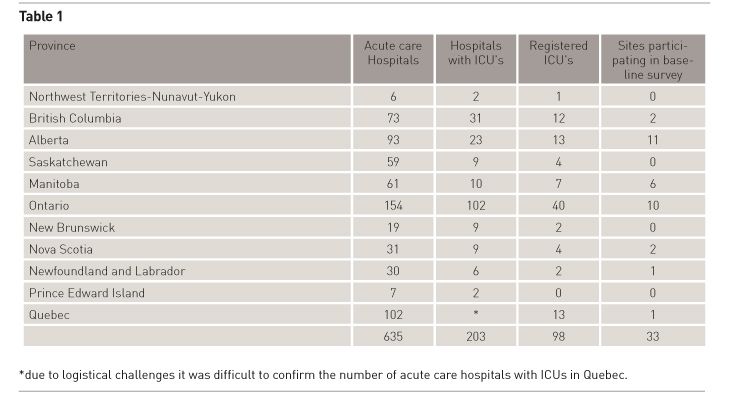 Data Collection Metrics
Based on the feasibility study, the time to abstract the CDS for a patient with an average length of stay (LOS) of eight days was a mean of 50.9 minutes (± 24.9 minutes) with a range of 26.0 minutes to 1.3 hrs. For the same average LOS, abstracting 30 patients would take a mean 25.5 hours (±12.5 hours).
Survey of Practice and Repository
Approximately 900 participants have been entered into the REDCap database. Analysis is pending the receipt of additional data from some of the sites. The repository of critical care documents was organised according to Organ Systems, Trauma, Pharmacology in the ICU, End-of-Life Care and Advanced Care Planning, Diagnostic Modalities, Rehabilitation, Nursing Management, ICU design and Laboratory medicine. This repository houses over 500 documents from across Canada and the database is searchable by keyword. In spite of aggressive recruitment efforts, only four sites registered for the collaborative with a total of seven projects. Passive KT efforts continue.
Discussion
We have developed a national network of ICUs which is inclusive of both academic and community centres. The creation of a standardised CDS, element data dictionary and scalable modular data system, which can be utilised for quality improvement or research will enable any future initiatives in this regard. We have amassed a repository of practice documents from across the country in a searchable, retrievable manner, which is and will continue to be a resource into the future for any clinician wishing to adapt them to their practice environment. This repository will continue to grow over time. We will continue to build the relationships within the network and with external organisations as we go forward,  including the Choosing  Wisely campaign (Choosing Wisely Campaign Canada 2015). In spite of these successes, aC3KTion Net encountered many challenges and was not able to carry out many of the activities envisioned at its initiation.
The nature of healthcare in Canada is that it is rendered regionally. Without federal oversight each province or territory is responsible for overseeing its own healthcare, resulting in thirteen systematically different healthcare systems, presenting a challenge when creating a national network. Further compounding this is the lack of public availability of a catalogue of acute care resources on either a federal or provincial basis, which made it difficult to identify all the acute care hospitals in Canada. In addition, determining which hospitals had critical care units was even more challenging. This necessitated a long labour-intensive process to identify ICUs, contact them and recruit them into the network. Although some provinces maintain up-to-date registries of critical care units, a registry of ICUs at the national level would facilitate initiatives such as ours, critical care resource management, human resource management and would be of importance during crises such as pandemics. This initiative has reinforced the need for the development of such a resource.
Despite broad support and enthusiasm for the baseline survey of practice, by June 2015 only one-third of registered ICUs had contributed data to the survey or approximately 900 participants nationwide. The lack of financial incentives from aC3KTion Net and lack of local resources at the site level were anecdotally identified as being responsible for not being able to contribute data at all or in a timely manner. Although the average time to abstract the CDS was significant, it was less than one hour per patient and we estimate that data collection per patient was less than two hours when the modules were included with the CDS. Although most ICUs maintain that quality improvement is a priority, in reality, dedicating resources to its conduct in the busy environment of the ICU remains challenging. This was a common refrain from our participating sites. Other factors which may have led to the poor response of baseline practice included the launch of multiple initiatives at once and perceived lack of return for the time spent on data collection. Financial incentives were not available for the collection of the data, and it is possible that the offer of standardised comparative reports of performance, ability to participate in our KT activities and access to the repository of practices was perceived to be insufficient. This will require further investigation.
The purpose of the baseline survey of practice was to ascertain penetration of research evidence into current practice and thereby target our knowledge translation efforts to the largest gaps. Since the baseline survey is incomplete, we have not been able to do this on a large scale. To this end, we offered the collaborative opportunity to ICUs which would or had completed the baseline survey. In spite of aggressive recruitment for the collaborative and expressed interest, participation was very limited with the expressed barriers being lack of availability of staff and the time commitment required. For the hospitals that participated in the collaborative, it was well received, and garnered positive feedback. Again, the ability to commit resources to external quality improvement initiatives appears to be limited. We are unable to comment on internal quality improvement.
Conclusion
We have developed a platform for KT activities that is nationally inclusive of both academic and community centres. Once complete, the analysis of the baseline practice data will provide insights and directionality forward. Many resource challenges and barriers to the conduct of KT and quality improvement in Canadian critical care units are present and provided challenges for the operation of the network as it was originally envisioned. More efforts are required to overcome these challenges and these are ongoing.

Dietitians in Critical Care - A Fundamental and Evolving Role

Nutrition in Critical Care Patients in the critical care setting are at risk of malnutrition (Heyland et al. 2011). The provision... Read more

A Librarian in the Critical Care Team

Knowledge about current research evidence is required by clinicians in order to practise safe and effective care. The health... Read more

Todd Dorman takes office as President of the Society of Critical Care Medicine (SCCM) in February 2016. He is Professor of... Read more