Being identifiable in theatre has a multitude of benefits―from improving communication to improving experiences of patients and reducing stress and anxiety in theatre.

Change within the healthcare system

In an ever-evolving healthcare system, the need for adaptation and change is important. The changing demographic of patients accessing healthcare today compared to just twenty years ago is evident as is the response in terms of technological advancements in care provision and research. The need for change within healthcare is widely recognised and models such as the UK NHS change model, which aims to transform, develop and achieve change to improve patient experiences and safety have been produced (NHS England Sustainable Improvement Team 2012). While change models are usually utilised at corporate or management level to bring about change within a hospital trust or across the healthcare system as a whole, this top-down approach to change can and often does take time to disseminate through the workforce. Initial drivers for change can be lost as the workforce does not usually have an active role in instigating the proposed change idea. Sometimes within healthcare an idea for change comes along, which is brought about by frontline staff and often referred to as a bottom-up approach to change. This kind of change can happen much faster within a workforce as the proposed change is usually patient-focused instead of being service-led which, more often than not, top-down change proposals are.
You might also like: Patient safety and social media

Until recently the bottom-up or grassroots campaign or initiative for change has been difficult to instigate as healthcare workers usually work within one sector within a hospital and are limited in terms of dissemination of a change idea across a trust and even more restricted in terms of being heard from higher up the management ranks. However, the use of social media over the past decade has seen an increase in the number of healthcare change campaigns in the form of hashtag campaigns. This has enabled the frontline work force to be more active in spreading the word, and the accessibility social media brings in terms of inter-trust relations seems to be a valuable asset to the bottom-up change approach. Another benefit to social media is that hierarchical barriers are often broken down, allowing students such as myself to be proactive in facilitating change not just within one trust but on an international level.
Hashtag campaigns and initiatives are more and more being recognised as a reputable way of raising awareness of change or where change is needed within the healthcare system. One very poignant social media campaign, which inspired me as a student, was that of fellow student midwife, Hannah Tizard. Hannah’s #BloodToBaby campaign helped in raising awareness of the importance of delaying clamping and cutting of the umbilical cord after birth. This campaign was formally endorsed by the UK National Institute for Health and Care Excellence, and the change in national guidance and policy has arisen from this (Tizard and Burleigh 2016). Other important hashtag campaigns include the #HelloMyNameIs campaign by the late Dr. Kate Granger and husband Chris Pointon and the #SkinToSkin campaign by midwife Jenny Clarke. Campaigns such as these are usually born from observing current practice routines and seeing a need for change or from personal experiences. The power of social media in the spreading of a popular hashtag campaign has been experienced by myself over the past year as my #TheatreCapChallenge campaign went viral, spreading across the world to countries as far as Australia, America and China.

#TheatreCapChallenge: a hashtag is born

At Lancashire Teaching Hospitals Trust (LTHTR), delivery suite manager, Emma Gornall, and the team have been working hard to improve birthing experiences of women having surgical birth. The importance of positive birthing experiences outlined in the Better Births Review (NHS England 2016) make clear the need to reduce the numbers of women entering maternity services having experienced birth trauma and post-traumatic stress disorder (PTSD) directly relating to birthing experience. The implications of negative birthing experiences include postnatal depression, tokophobia (fear of birth) as well as issues with bonding and breastfeeding (Ford and Ayers 2012). It has also been shown that anxiety and stress can delay healing (Kim et al. 2014). While we can improve experiences and outcomes of women having normal birth with midwifery-led birth centres, we also need to look at what we can do to improve the experiences of women in theatre. At LTHTR, the focus on improving experiences for women and families in theatre has seen a number of changes, including the introduction of low lighting in theatre, music, battery-powered candles, immediate skin to skin, breastfeeding support while on the operating table and birth partners present throughout. Feedback has been positive from women and families so we looked at where we can do more. After a conversation on social media, Emma Gornall suggested writing our names on our theatre cap in a bid to reduce anxiety for women and I immediately recognised how this could be beneficial in more ways than one. 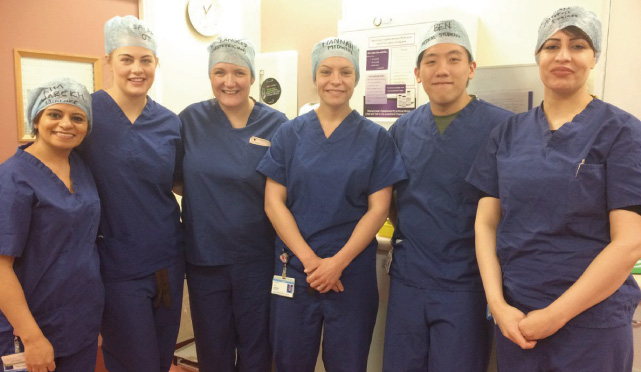 From personal experiences in theatre having a surgical birth, I knew first-hand how scary it can be. I also remember how I felt anxious because I wasn’t sure if the woman in scrubs was the midwife who had been caring for me up to the point of going to theatre and I was just too fearful to ask. I also remember feeling confusion as different people all wearing the same set of scrubs and hats spoke to me and this alone brought about feelings of a loss of control which now looking back impacted massively on my birthing experience in theatre that day. As a student observing other healthcare professionals in theatre it is easy to see how recognising these feelings in patients can be missed. For people regularly working in theatre, the theatre environment becomes normal and not scary at all, which is understandable, but this comfort in our own surroundings and working environments can subconsciously cloud our ability to empathise with the patient.
One day, while caring for a woman who I knew was particularly anxious about going to theatre, I decided to write my name and role on my theatre cap. Being a student is scary enough in theatre, but being the first to do such an alien act was even more scary. However, feeling particularly brave that day mixed with a passion to improve women’s experiences I did it! After a mixed reception from theatre staff from a few odd looks and questioning of what I had done to others instantly saying how it was a fantastic idea it was the feedback from the woman in my care and her partner that clinched it. She said it put her at ease and this was what mattered to me. I instantly wanted to share with Emma and my colleagues that I had done this so I posted a picture of my hat on social media and came up with the hashtag in a bid to inspire others to do the same. Little did I know that not only would it inspire colleagues within my trust to do it, but it also inspired theatre teams all over the world to do it too. Shortly after posting the hashtag, an anaesthetist called Rob Hackett from Australia who had previously written about the importance of writing names on theatre caps in improving patient safety and reducing human factors began to share the campaign and more benefits to this simple act became apparent. After a few weeks the campaign grew as more and more people posted their #TheatreCapChallenge pictures on social media. 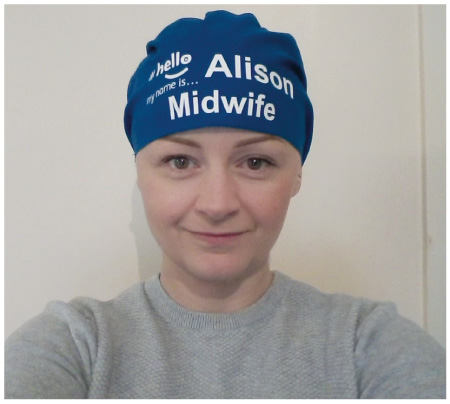 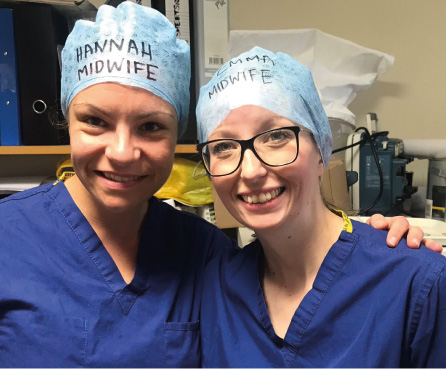 Since it began almost a year ago NHS trusts up and down the country have implemented and championed the practice of writing names and roles on theatre hats. While it was originally born from a passion for making birthing experiences for women in theatre better, the idea has been adopted by different theatre teams including day case theatres, transplant teams and paediatric teams to name a few. While some question the evidence behind the practice in relation to patient safety before wishing to put pen to cap, for me the only evidence I need that this has huge benefits within the theatre environment is that of the feedback from the women and families within my care. While women and families feel the benefits from this simple act, I will always champion #TheatreCapChallenge.

What has been the impact? A new study reports on the impact of breast density legislation in the USA on awareness of... Read more

The role of social media in cardiology

Social Media is gaining significant popularity amongst the medical and allied health professionals. It enables a platform... Read more

How the simple ingredient of delight can transform healthcare

A small dose of ‘magic’ in the healthcare setting can lead to a more efficient experience. With an emphasis on health... Read more

Instigating change to theatre environments through social media. Being identifiable in theatre has a multitude of benefits―from... Read more

theatre, social media, patient communication, TheatreCapChallenge Being identifiable in theatre has a multitude of benefits from improving communication to improving experiences of patients and reducing stress and anxiety in theatre.