COMPUTER MODEL LOOKS AT ER FUNCTIONS, EVEN BEFORE IT’S BUILT

With the cost of building a good hospital estimated at around $1 million per bed, it makes sense to test out new layout ideas before any actual construction gets underway.

As a new hospital is an incredibly expensive endeavour, we used a software programme to test different variables in the efficient functioning of an accident and emergency department.

There are several types of simulation commonly used in healthcare: device-based, role-based and model-based. Device-based simulation would use a manikin to learn how to properly perform CPR. In role-based simulations, future nurses and physicians act out scenarios with standardized patients. Model-based simulations — like the ones I work on — are a little different in that they don’t require a physical object or interaction with an actor, but instead can exist solely on a computer. However, they are extremely powerful tools for testing novelty and innovation in healthcare.

One example was when I was working on testing new ideas for the emergency department of the Nemours Children’s Hospital in central Florida a few years before it opened on October 22, 2012.

On opening day, the entire team would have to function like they knew what they were doing. And hospital leadership wanted to move patients through the system in a way that had never been done before.

The goal of any hospital is to get patients through the emergency department and either discharged or admitted to the hospital as quickly as possible — a measure called “length of visit” — while still caring for each effectively. The simulation can test how factors like the number of nurses or the way physicians are allocated can change, for better or worse, this length of visit.

Instead of labeling incoming patients as those that were critical and those that were not critical, our team tested out the system of dividing them into four groups called “care streams.” In addition to the critical care stream and the “fast track” stream (in a way similar to the nearby Disney World that gets certain riders through the lines quickly, this group doesn’t need much care and can be treated and discharged quickly), Dr. Todd Glass, the hospital’s chief of paediatric emergency medicine, devised two middle streams: therapeutic and diagnostic. These two streams are patients who do need emergency care although not urgently like the critical stream and yet more complicated care than the simple fast-track stream. Therapeutic stream patients have an obvious ailment — a broken arm, for example — and can begin treatment immediately without a lot of diagnostic workup. The source of diagnostic stream patients’ problem is less obvious, so testing needs to be performed before its clear how best to treat them.

We took these novel ideas and embodied them into the computer simulation programme. In doing so, we determined that we actually needed a fifth stream, a subset of the critical care stream, of resuscitation or ‘code’ patients.

Just taking ideas out of people’s heads and putting them into a computer programme is illuminating.

Even something as seemingly simple as the size of the waiting room needed can be tested using these simulations. Because this is an emergency department for a children’s hospital, one assumption would be that each patient will come with one or more adult family members, and those parents might also bring other children who will also need to be comfortable while their sibling is being treated.

The hard work paid off when the design for the hospital won a citation in the 2011 Modern Healthcare Design Awards.

Technology of Modeling People Flow is Not New

Modeling the flow of people through the hospital is not a new idea: the technology in some form has existed since the 1970s, and the hospital emergency room has always been a classic example. However, modern technology has allowed for greater complexity in the modeling process and faster processors make it easier to input details and run multiple scenarios for “centuries” to see what percentage of the time certain events occur. I can give them centuries of experience with their emergency department before they even stick a shovel in the ground.

Essentially, what our team was able to do was feed a number of “building blocks,” each of which represents some aspect of the real world, into the computer programme. The building block might be an “agent,” like a nurse or a patient, who has a specific goal: tending to the patient or being treated, respectively. Those agents then interact with other building blocks, like the number of available treatment rooms, and these interactions lead to different outcomes. 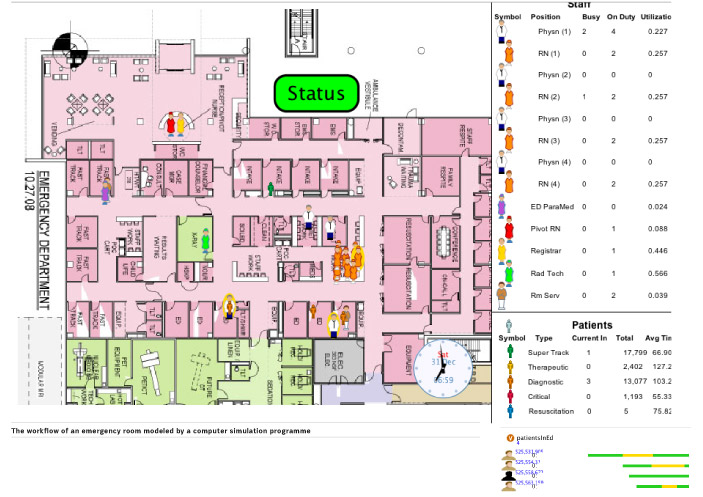 It’s a matter of deciding what parts of the real world you want to explicitly present. You can almost always add new details to further refine the simulation, but although modern processors are extremely powerful, the human building the model still only has a set number of hours in the day. It really comes down to a negotiation of time — how soon you need the answer and what level of detail you are willing to live with. It’s a matter of who is using it to make what decisions about actual hospital design, patient care workflow or operations.

Of course, those decisions will only be as good as the assumptions put into the model in the first place. As scientists, we want to go find some record of history to make the assumptions, but you don’t have to throw away this analytic approach just because you don’t have historical data. An estimate is better than a wild guess. And even if there is no good estimate, the scenario can be run with several different values for that variable, which allows testing of how sensitive the ultimate outcome is to that particular feature.

Because the world really does have some degree of randomness, the computer can factor in that natural variability as well. We set up the assumptions, we turn it loose, and we sit back and see what it tells us. Because the same scenario can be run multiple times with different values for the random variables each time, these simulations can help the designers anticipate — and thus prepare for — the unusual.

Ultimately, though, it’s what happens in the real world that matters.

Until we run further tests, we can’t know for sure how much we can take credit for. All we know is that since opening, the emergency department at NCH has had an average length of visit that is roughly half that of the rest of the industry providing similar paediatric emergency care.

Mobile devices are used by most students, residents and radiologists in everyday life. They allow fast and convenient access... Read more