Seguro Popular: Mexico’s Progress in Protecting the Right to Health

Mexicans are embracing human rights more than ever before, and Mexico’s constitution has recognised that healthcare is a universal right for more than thirty years. And yet, as made obvious by conflicts over 'Obamacare' in the United States (Council of Economic Advisers 2015), this most obvious of rights is rarely accepted without debate. Although Mexico has recognised that the government is indeed responsible for providing a dignified and high-quality healthcare system, is this just more human rights talk with no substance?
And if not, what has the government actually done?
Mexico’s National Commission for Social Welfare in Healthcare (the 'Seguro Popular', or ‘popular insurance’), created in 2004, has been a key public policy. We can evaluate its progress along three factors: financing, equity and actual healthcare impacts (Comisión Nacional de Protección Social en Salud 2004).

Financing is critical if the healthcare system is to offer timely, high-quality services. One substantial change introduced by Seguro Popular was the creation of binding legal financial obligations. As a result, Mexico’s health budget no longer depends on political or economic circumstances; instead, the government must, by law, allocate, a minimum budget to each card-carrying member of the new Seguro Popular, or the older social security systems.
Because of this fixed per-person sum, increases in the number of insured people were accompanied by similar increases in resources. The resulting funding boost was enormous, making it possible to deal with rising Seguro Popular enrolment, increase demand for health services, and ensure a stable and predictable flow of funds to improve infrastructure and capacities (Office of the President 2011).

In addition, a study by researchers at the University of Chicago (grogger et al. 2010) concluded that Seguro Popular had reduced healthcarerelated bankruptcy in Mexico by 16 to 22 percent, and reduced healthcarerelated impoverishment by 22 to 36 percent. Furthermore, the probability of falling into bankruptcy had been reduced in almost every Mexican state, in both urban and rural areas.

To determine how Seguro Popular has affected the health of the registered population, Seguro Popular carried out an in-depth evaluation with 65 teams of investigators and a wide array of national and international universities.
Some results were encouraging. Registration for Seguro Popular increased the probability that families would visit a primary health clinic, which is fundamental to the control, prevention and care of disease.
The effect varied by social class, but overall, the mere act of Seguro Popular registration was associated with an increase of up to 30 percent in the number of doctor visits. This effect was higher in adult women living in urban communities.
Registration also increased Seguro Popular members' sense of having better health than peers of the same age and gender; for urban residents, moreover, it reduced their probability of suffering from colds, coughs, stomach aches and heart disease. Meanwhile, in rural areas, Seguro Popular membership reduced the probability of missing work due to health problems.
More complex illnesses also registered positive impacts. For example, the rate of cessation of treatment (due to inability to pay) for children with cancer decreased from 30 percent to 5 percent, and the survival rate was 30 percent to 5 percent over three months. Also, as reported in medical literature, after the introduction of Seguro Popular, the survival rate of acute lymphoblastic leukaemia reached 80 percent over a period of 115 months, when children received proper treatment. 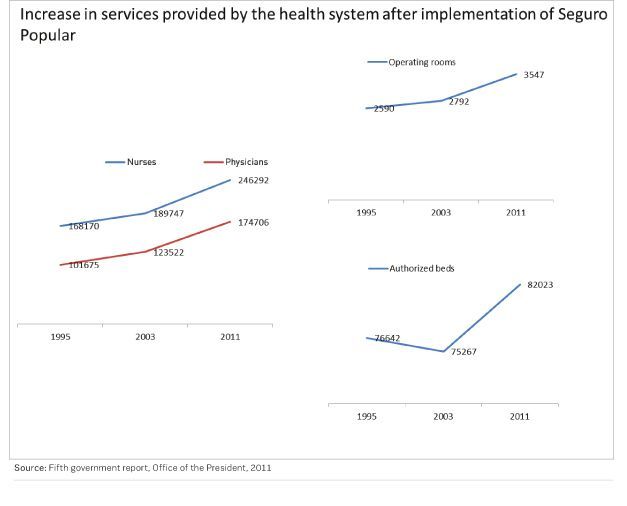 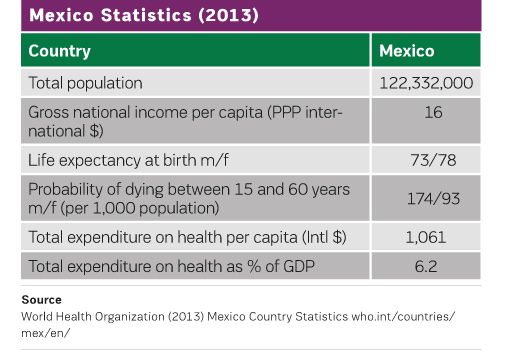 More than 10 years after its establishment, Seguro Popular’s principal challenge remains achieving higher quality medical service and strengthening its links to the traditional Mexican healthcare systems, which rely on employment-related insurance for those lucky enough to have stable jobs.
Overall, however, Seguro Popular has been a great step forward in creating a free, dignified, high quality universal healthcare system. It has not been an easy task, and there are still great challenges and areas for improvement.
But while there is still a long way to go in human rights, Mexico has made significant progress in fulfilling its’ citizens’ right to the maximum available level of healthcare. At home and abroad, these achievements should be recognised, supported and celebrated (openglobal Rights 2015).

How Design Can Improve the Healthcare Experience

Gamification is on the rise right now as a powerful tool to change behaviour - not only in healthcare but in many fields,... Read more

1. What are your key areas of interest and research?  Occult fractures and outcome in acute ankle injuries and using MR-Ultrasound... Read more

Healthcare organisations need to make much better use of the health data that they hold and to share that use with other organisations... Read more