Founded in the same year as the NHS and celebrating its 70th birthday in 2018, the UK charity Music in Hospitals & Care continues to deliver the benefits of live music to adults and children right across the healthcare sector.

The conventional wisdom is that even the ancient Greeks and the Egyptians realised there was a link between music and human emotion. Even so, it was only thanks to the vision of the late Sheila McCreery that the Council for Music in Hospitals came into being in 1948 and provided its first ever live music concert in the same year. Setting out to provide the therapeutic benefits of live music performances to those whose physical or mental condition prevents them from attending those concerts that the rest of us take for granted, the Council for Music in hospitals has grown from a local, surrey-based charity to a national, UK-wide charity with offices in England, Scotland and Wales.

The growth of the charity, now called Music in Hospitals & Care (MIHC), has been somewhat meteoric; having delivered just a few concerts in 1948, 2016/2017 saw the Charity provide over 5,500 live music concerts to audiences of over 128,000 adults and children in healthcare in every nation and region of the UK. and those audiences were in every part of healthcare imaginable, from special schools on the one hand, through hospitals, hospices, care homes and daycare centres, to some very specialist units on the other, dealing with stroke, dementia and critical care.

Music is becoming an increasingly important part of healthcare and there is a growing body of evidence to suggest that taking part in, or experiencing music can have significant benefits on our overall level of well- being. Specific studies have highlighted the benefits to be gained from music for those suffering with dementia, tinnitus, bipolar disorder, multiple sclerosis and chronic pain or fatigue. In addition, numerous studies carried out with musicians, caregivers and their families have reported that engagement with a wide range of musical activities continues to be rated highly amongst the various activities enjoyed by residents in most care facilities. The reported evidence strongly suggests that the ability to enjoy and engage with musical elements in a meaningful way remains strong although other cognitive functions deteriorate. Accordingly, music continues to become increasingly accepted as a beneficial non-pharmacological intervention in a wide range of care contexts, whilst in tandem with this, a growing number of studies have also reported on the relatively limited effectiveness of commonly used medical interventions.

Certainly, music appears to bring with it numerous benefits, but many questions remain unanswered. We know little about the relative benefits gained from musical events as opposed to armchair exercise or craft activities for example. Similarly, research work with those living with more severe forms of dementia requires new and innovative research tools to be developed including more quantitative measures that move well beyond the standard approaches of questionnaire and interview. For example, as part of our own research programme with Dr Nigel Marshall, we have been involved in pioneering the use of salivary biomarkers as a means of giving voice to people living with a range of severe cognitive disabilities by measuring their relative levels of wellbeing before and after musical events.

Overall, the results from our research programme are very specific. The picture emerging from the research data is that music is a soundtrack to life from which all can benefit. The chance to engage with musicians is not only enjoyable and beneficial for clients in a wide range of care facilities and contexts, but also particularly effective in promoting both emotional and physical wellbeing amongst all those involved in the process of caring. 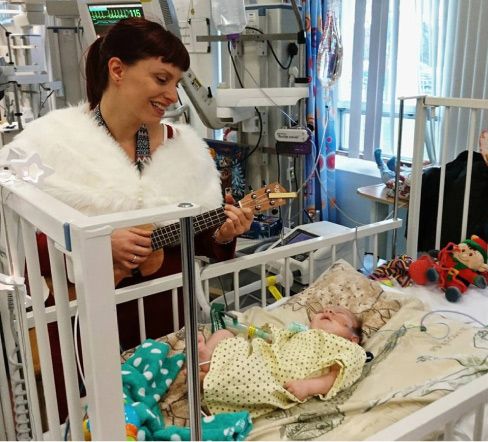 The high quality of music is one of the hallmarks of our live music sessions but so too is the ability for musicians to engage with the audiences. Our concerts are not about recitals but about engagement and, to be honest, not all musicians are able to connect with audiences in the environments in which MIHC works. The settings can be quite emotional and sometimes disruptive but the concerts are always demanding in their own way. As a consequence, each and every musician is selected through a rigorous audition process with auditions taking place in healthcare settings; in our view it is the only way to ensure the musicians we select are able to cope with the demanding circumstances in which they will work. the audition is but the first step and mentoring and regular get-togethers ensure we refresh our practices and learn from each other, thereby delivering the best possible performances that we can.

Across the UK, our teams are delivering a range of projects for particular parts of the community, focusing where possible on those areas of special need and deprivation. Often this will be geared to the wishes of the donors and supporters who provide the funds to enable the live music concerts to take place. During the recent past such projects have included the ex-service community, especially during the centenary of the First World War and its many battles, those living with dementia and those in care from the seafaring community to mention but a few. However, amongst the many are a couple of projects that deserve more explanation here. 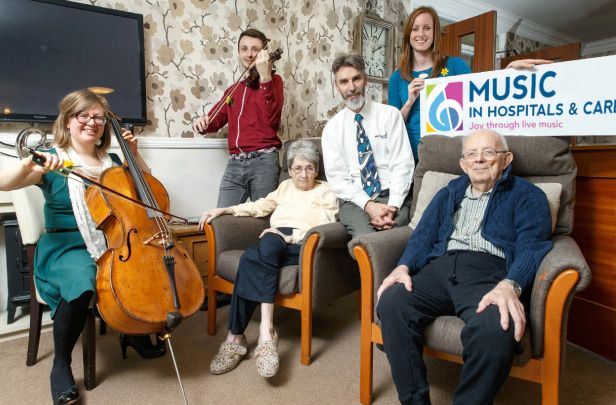 This innovative project has been developed to provide regular professionally performed live music within critical care units (Ashley-Taylor 2017). Musicians play a carefully chosen repertoire at the bedside of critically ill patients. The music creates a soothing ambience in this highly clinical and sometimes intimidating environment and helps to humanise the experience of patients at a very difficult time in their lives. The project came about as a result of the experiences of one of our long-term volunteers. In 2015 she was treated in intensive care after unexpected surgery. Her experiences on ICU left her traumatised and following her medical recovery, she attended several support groups in the area. Not initially being aware that her own experiences resonated with former ICU patients but after meeting others and sharing accounts of the effects of prolonged anxiety and delirium experienced by many, she realised the long term ramifications a stay in ICU can have. Many former iCU patients struggle with daily life after discharge – awareness of this fact is some- times poor amongst friends, families, some GPs and many employers. recovering pre-illness life and/or livelihood can be enormously challenging.

At the Manchester Royal Infirmary (MRI), Natalie Mason (Critical Care Follow Up sister) and Donna Cummings ( Lead nurse) were simultaneously exploring ways of how to humanise the critical care ward for patients. There is a growing recognition amongst clinical staff that although critically ill patients are often treated successfully for their physical conditions, their experiences of critical care can leave them emotionally and psychologically scarred. In conjunction with our volunteer and the MRI hospital staff, we explored ways in which therapeutic live music can be used for the benefit of critically ill patients on the intensive care and high dependency units. Together we discussed the possibilities of using carefully delivered music to help patients cope with fear, pain, trauma, sedation, delirium and disorientation.

Considerable planning and preparation was needed before the first music session took place. We identified suitable musicians who demonstrated the necessary qualities needed to deliver appropriate music at the bedside in such a sensitive environment including gentleness, flexibility, calmness, resilience and the ability to play soothing music from memory. Choice of appropriate instruments was also important as the ability for a musician to improve a stressful clinical environment is partly dependent on the sonorous quality of the instrument they use. Having carried out all the preparatory work we then embarked on a pilot project in July of 2016 consisting of 4 one-hour long music sessions on the ward. The success of the pilot project has been such that we now organise regular sessions on other critical care wards throughout the North of England: Stepping Hill hospital, Salford Royal, Aintree Hospital (Liverpool), Northern General Hospital (Sheffield), Freeman Hospital (Newcastle) and Sunderland Royal. The project is currently being rolled out across the rest of the UK and the ICUs at St Mary’s Hospital Paddington and University Hospital Coventry have recently had their first sessions delivered. At the same time we are training more MIHC musicians from Scotland and Wales to deliver sessions across a wider area of the UK. interest in our ICU-hear project has gathered momentum and we have had specific enquiries from the Netherlands and more general interest in our activities from Lithuania and China. 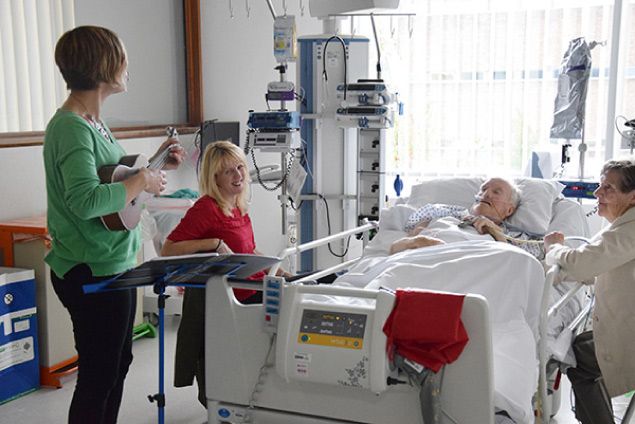 Our Lullaby hour project provides gentle lullaby music sessions for children and babies in the Children’s Heart Unit at the Freeman Hospital in Newcastle-upon-Tyne. The concerts take place fortnightly in the early evenings. Our skilled musicians visit each child, moving from bay to bay, singing and playing their instruments in a gentle and soothing way. one of the real benefits of having such talented musicians is that they can weave each child’s name in the songs they are singing. Sometimes the children are able to engage and are playful—our musicians are able to respond to the energy of each child in a flexible way. At other times the children can be very poorly and weak—in this case, the rhythmic sounds and eye contact with the musicians can show that the children are clearly settling. observations made during the sessions showed that one little girl’s heart rate lowered during the singing, and then rose again when the singing ended.

Lullaby Hour has proved especially successful as it provides a comforting ‘bedtime’ atmosphere for the children and can thus help to soothe them. Parents can also share a moment of normality with their children and are also calmed by seeing their children smiling and engaging with the lullabies. Parents sometimes join in with the singing. one parent became very tearful and said to our musicians: “You sing so beautifully. please don’t stop.” Many parents take photographs and film of their children smiling and laughing during the sessions. on occasion, parents can’t be there at bedtime—in such instances our musicians work closely with the specialist play nurse, who supervises all the sessions, and who will often cuddle the babies and children during the lullaby. We are very keen to roll this project out to other children’s hospitals and hospices across the UK as we have with other projects. We also hope to produce a Lullaby Hour Songbook with audio that will be available via our website for anyone to access.

As we celebrate our 70th birthday milestone together with the NHS, we will continue to deliver live music concerts to those in healthcare in every corner of the UK and Northern Ireland; from the Highlands and Islands of Scotland, to the tip of Cornwall, from West Wales to East Anglia—and don’t not forget we include the Channel islands too— let the music play!

A snapshot of the top killer health conditions around the globe. Read more