A cryptocurrency that represents the value of health information can motivate individuals to make their health data shareable to those who are willing to pay for it.

Tokens are well established in the context of Blockchain technology and cryptocurrencies. It’s a digital asset that has a utility or a payment function. Very often, it’s a hybrid token and possesses both properties. However, technically, it is just a piece of cryptographic code of no intrinsic value. Although Blockchain and its related cryptocurrencies are a recent development, tokens have been the subject of psychological research for a long time. In psychology, tokens are used to shape a target behavior, and therefore tokens have to be backed by reinforcers. A relation between a token of no intrinsic value with an unconditioned reinforcer like food or a conditioned one like money has to be established by reinforcement. The law of effect (Thorndike 1898) describes that behaviour which is followed by pleasant consequences as having a higher likelihood of being repeated, whereas unpleasant consequences decrease the likelihood of repeat behaviour. The effectiveness of a token reward as a means of behaviour modification has not only been observed in humans but also in primates (Wolfe 1936) or pigeons and rats (Skinner 1948; Skinner 1953). In humans, it is often applied in cognitive behavioral therapy and childrearing.
But how does that apply to health data and how could the tokenisation of health data be the solution of some of the most pressing problems in modern healthcare?

Health data as the currency of healthcare systems

Modern healthcare runs on data. Everybody is on the hunt for data in order to optimise processes or develop better therapies. Tremendous amounts of data are being generated by medical documentation, regulatory requirements, and patient care (Raghupathi 2010). In addition, precision medicine and the general trend of digitisation in healthcare lead to a constant rise of data being gathered at the individual user or patient’s level (Andreu-Perez et al, 2015; HM Government UK 2014). Another driving force in this massive growth of data is the individual himself when using a fitness or wellness app.
There are only estimates what personal health data are worth, but it can be deducted from what companies are willing to invest in order to gather those data. IBM bought Truven Health Analytics for $2.6 billion to train Watson on 200 million patient records, meaning that one record was worth 13 USD. It is a low price if you take into account what pharmaceutical companies invest in order to gather clinical trial data and real-world evidence. Prices that are being paid for so-called post-market surveillance might be a good indicator of the data value, with an average of €441 per patient paid to the physician providing the data (Spelsberg et al 2017). It is needless to say, that in today’s data economy, wherever there is a value generated out of data, it is not the individual as a data provider who profits directly from the monetisation of its data. It results in a lack of incentives for individuals to demand or record, digitise, and update their health data. Hence, it perpetuates the current system of monopolisation of health data leading to siloes and inefficiencies instead of motivating the individual being in control of his data.

Most people are only interested in their health data when they are sick or when somebody they know is suffering from a health problem, but there are ways to motivate them to tend to their health data. In a recent survey in Switzerland, 43% of all people said they would be willing to provide their personal data to medical research, either for free or for a reduction of their health insurance premium (Tagesanzeiger 2017). In comparison, 54% of internet users are willing to share their health data with their health insurance, if they receive incentives such as vouchers or premium reduction (Statista 2015). However, 79% of German online users want the power to decide who can access their health data (BKK Dachverband Gesundheitsreport 2016). It shows that healthcare systems must incentivise individuals to take control over their data. At the same time a technical infrastructure is needed, where everybody who seeks data can ask individuals for their consent to make their health data shareable.

Blockchain technology can facilitate such an infrastructure in the form of a decentralised marketplace where the access to health data is under the control of the individual. Information seekers can post their query and individuals can remain anonymous and decide whether or not they want to share their data. With the tokens in a Blockchain-based marketplace, a reward can be automatically transferred on the basis of a digital contract once the data has been delivered. Such a system has a clear advantage over a fiat currencybased system where always a middleman has to be involved and the large population of unbanked individuals cannot participate. In Figure 1 the token economy of the Health Information Traceability platform is presented. A payment and utility token facilitates transactions of health information. Information seekers acquire tokens to incentivise individuals to digitise and share their data, while individuals can: a) redeem bonuses/ services that are offered by service providers on the platform; b) trade it for another cryptocurrency; or c) exchange it for cash at designated exchanges. Individuals can also monetise their data that is stored in external repositories and share revenues with the information holders such as personal health records, claims processing companies, hospitals and pharmacies. The central asset to be exchanged in the HIT-ecosystem is information that has a token value attached to it. The token value depends on how much the network participant values the information in question. 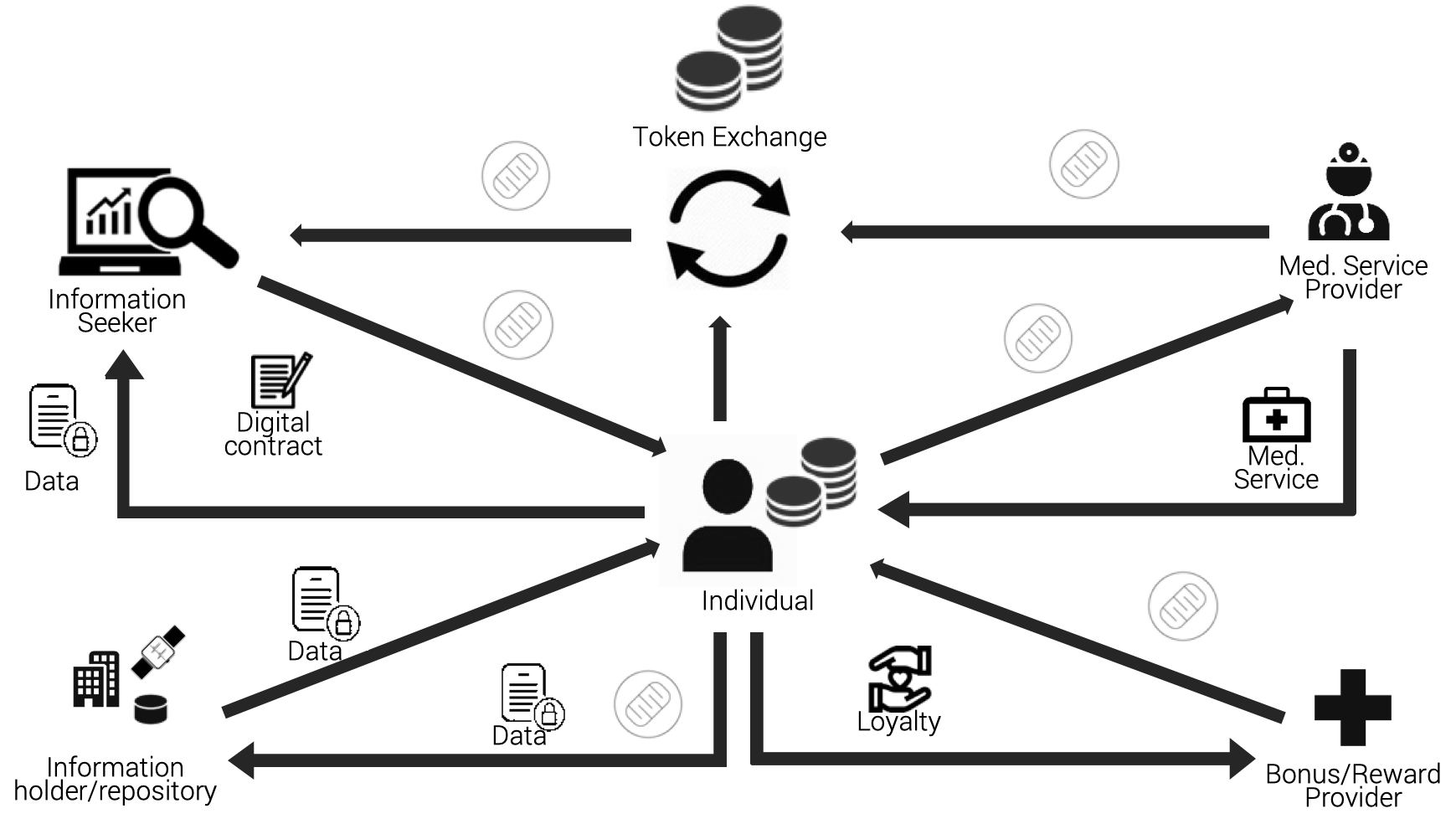 Such a distributed ecosystem can be implemented with Blockchain technology, making transaction processes transparent and more efficient at the same time. A Blockchain-based token system is predestined to align incentives among ecosystem participants, for example, providers of health information and those who want to analyse health data. It allows the latter to have direct access to providers of health information without the need for intermediaries. At the same time, it puts individuals in control of the use and monetisation of their health data. Tokenisation of health data motivates individuals to make their data shareable, thus solving the fundamental problem of modern healthcare.