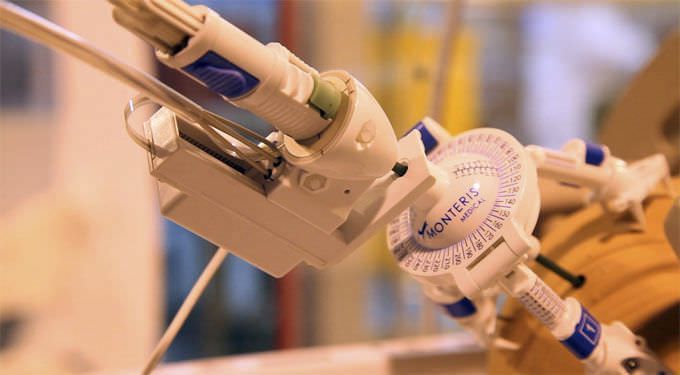 The NeuroBlate® System by Monteris® Medical, Inc. enables MRI-Guided Neurosurgical Ablation. It is the only system which monitors ablation contours in 3-Dimensions and provides real time imaging to support the surgeon's clinical decisions. The NeuroBlate System employs diode laser energy, delivered via a gas-cooled, fiber-optic probe which allows surgeons to safely approach, and selectively ablate, soft tissue and lesions in the brain that may have been previously deemed inoperable. The NeuroBlate System provides a new level of Controlled Access, Contoured Ablation, and Confirmed Margins, offering physicians a "Ray of Light" and patients a "Ray of Hope". The NeuroBlate System is a combination of hardware, software and disposable surgical devices used with an existing MRI scanner. The integration of these devices allows the neurosurgeon to precisely direct an MRI compatible, gas cooled laser probe to a desired target, administer laser interstitial thermal therapy (LITT) and monitor thermal dose using real time MRI thermometry data. At Monteris, we like to say "The System is the Solution". the NeuroBlate directional laser is the preferred tool for contoured ablation of targets while sparing adjacent healthy tissue. The NeuroBlate diffusing laser is designed to provide fast, volumetric ablation in a concentric zone of hyperthermia. Indications for Use
a:3:{i:0;a:2:{s:4:"name";s:16:"Type of therapy:";s:3:"val";s:38:"for brain tumor laser thermal ablation";}i:1;a:2:{s:4:"name";s:12:"System type:";s:3:"val";s:21:"laser ablation system";}i:2;a:2:{s:4:"name";s:8:"Control:";s:3:"val";s:10:"MRI-guided";}}
× × × × × × × × × × × ×
[email protected]