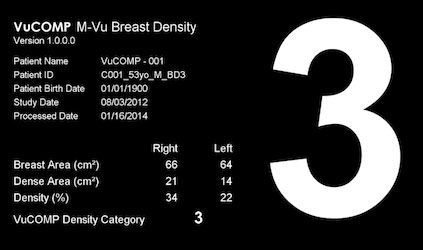 Share
Download PDF
VuCOMP, Inc. has announced the installation of both the M-Vu Breast Density and M-Vu CAD (Computer-Aided Detection) for Mammography throughout Baptist Health imaging centers in Jacksonville, Florida.
VuCOMP’s Breast Density and CAD systems are designed to provide an unprecedented level of performance to help radiologists find breast cancer earlier. Baptist Breast Health Services locations offer the latest screening technologies including GE Digital Mammography, and are the first in the region to use both VuCOMP breast cancer detection technologies.
M-Vu CAD analyses mammographic images and marks areas of suspicion using sophisticated mathematical algorithms.  M-Vu Breast Density evaluates mammograms in much the same manner as experienced radiologists do: by analysing the structure and texture of the tissue, rather than simply estimating total fibroglandular volume. The algorithms then calculate a percentage of breast area that is dense and convert it to one of four density categories corresponding to the BI-RADS standard.
This exclusive approach using appearance-based analysis provides useful adjunctive information. Clinical studies have shown that extensive breast density can make breast cancer detection in a mammogram more difficult, and may also be associated with a higher cancer risk. Because of these issues, radiologists classify breast density using a four-level density scale established by the American College of Radiology as part of its Breast Imaging Reporting and Data System (BI-RADS) standard.
“I’ve seen firsthand the difference that early detection can make for women with breast cancer, so I’m a passionate advocate for any technology that can help me make that difference,” said Christine A.J.  Granfield, MD, Medical Director of Breast Imaging at Baptist Health. “We find the M-Vu computer-generated Breast Density values very beneficial and consistent. Also, the M-Vu CAD identifies areas of suspicion more accurately than our previous system, and is therefore more usable and effective."
VuCOMP CEO Jeff Wehnes commented, "Dr. Granfield and her team at Baptist Health are taking a progressive, industry-leading approach to the early detection of breast cancer. We are pleased to partner with them in providing the benefits of our M-Vu CAD and M-Vu Breast Density to the more than 65,000 women they screen annually, and look forward to continuing to provide them with the most advanced breast imaging tools available."
M-Vu CAD received FDA approval for digital mammography in October 2012. While mammography CAD systems have been FDA-approved since 1998, recent FDA guidelines have significantly raised the bar for demonstrating CAD effectiveness, and now recommend comprehensive reader studies proving that radiologists are more effective when they use CAD.
The VuCOMP system is the first mammography CAD product in the world to achieve FDA approval under these clinical study guidelines.  M-Vu Breast Density received FDA approval in December 2013.
Source: VuCOMP
11 March 2014

October is Breast Cancer Awareness Month. This is an annual campaign to... 117436Read more

In this article, we discuss some aspects of note with regard to virtual... 117410Read more