Share
Download PDF
The importance of communicating critical and incidental findings as soon as possible is not in dispute. The radiologist’s responsibility does not end with the report, and he/she has a duty to communicate findings to referring clinicians. As it is, failure to communicate appropriately is the second most common reason for malpractice actions against radiologists after misdiagnosis. However, how to communicate was the subject of some spirited discussion at the Management in Radiology (MIR) Annual Scientific Meeting in Bologna last week. 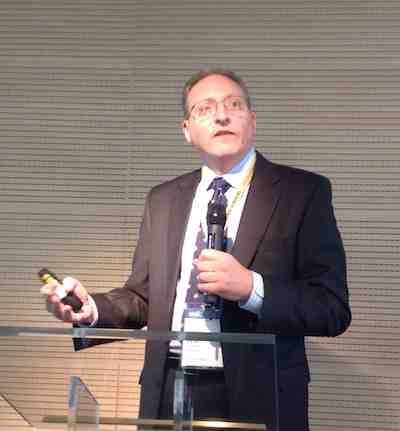 Prof. Kahn noted the phenomenon of the “satisfaction of search” - finding the one thing and being content with that. However, there will often be incidental findings of varying levels of concern. To quote George Bernard Shaw, “the single biggest problem in communication is the illusion that it has taken place.”

As a member of the American College of Radiology’s Actionable Findings Work Group, Kahn helped to develop the group’s recommendations for actionable findings. These align with national patient safety goals, which include the goal to “report critical results of tests and diagnostic procedures on a timely basis”.

The Work Group defined levels of actionable findings and the role of IT support in managing these findings. The three categories are:

Category 1: Communication within minutes. This category is for life-threatening abnormalities,e.g. acute pulmonary embolism that could lead to death or significant morbidity if not promptly recognised, communicated and acted upon. Such findings must be directly communicated verbally to the ordering clinician as promptly as possible. This communication may be required to be documented either by institutional policy and/or by the Joint Commission (the U.S. healthcare accreditation organisation). The ACR work group states that “critical results” as defined by the Joint Commission should be a subset of this category, and they have specific documentation and tracking requirements.


Category 2: Communication within hours - these are clinically significant observations that generally explain a patient's acute presentation and require specific medical or surgical treatment, but they do not have the same urgency and severity as those in category 1. These findings include, for example, retained surgical instruments and findings highly suggestive of malignancy. Category 2 findings require direct communication, with a preliminary report sent by secure fax, a phone message and a promptly available finalised report. Other communication mechanisms can be defined locally.

Category 3: Communication within days - this includes discrepancy e.g. preliminary interpretation, correction of prior final report. This category also includes the “incidentaloma” or unexpected finding, which does not require immediate action, but may require (long-term) follow-up imaging.

IT can assist, with alert systems  where a radiologist records a message, the system traces the referring clinician, and escalates if the message is not picked up. Electronic health records (EHR) can include “view alert” codes. Actionable-finding tracking systems enable critical results reporting and follow-up reminders.

In Kahn’s opinion, IT is most useful for category 3 findings, which require communication within days. In these cases the physician who needs to take action may not be the one addressing the acute problem. DICOM Supplement 155 in fact defines export of template-based radiology reports into the EHR, and incorporates actionable finding codes.

Kahn urged radiologists to build a relationship with their emergency room: “Don’t be ‘the radiologist.’” Radiologists should also liaise with patients - a patient with a category 3 finding that needs follow-up could be advised to get a scan later on. This would be in addition to informing the referring clinician. An increasing number of centres are enabling patient access to reports, and Kahn noted a recent article in JACR by Bruno and colleagues looking at radiologists’ reports in the era of patient web portals. Radiologists need to define policies on actionable reporting at their institutions. IT can be a solution where appropriate as it both communicates and documents findings, he concluded, but a conversation with the referring physician is best.

Professor Leonard Berlin surveyed a slew of legal cases that have ended up at state supreme courts as a results of radiologists’ failure to communicate. A 2011 report from the CRICO Emergency Leadership Council noted that missed or delayed diagnoses were most often attributable to missing information that existed at the time of service, but was not available to physicians when they needed it to determine diagnostic decisions. A key gap was the timeliness of radiology data. Sing, writing in JAMIA in 2007 found that physicians failed to acknowledge receipt of abnormal imaging results transmitted by computer in more than thirty percent of cases. Worryingly, in 45 cases, the imaging study was completely lost to follow up.

The American College of Radiology surveyed members on communication in 2013. Out of 3,400 responses, 23% had been sued, 49% had not been sued, and 28% did not answer the question. In 29% of cases the case was dismissed or won by the radiologist. 59% of cases settled or had a trial verdict in favour of the plaintiff. 82% were aware of the ACR practice guideline on communication, and 61% had a written policy. 97% agreed that emergency findings should be communicated to referring physicians  in person or by phone, falling to 24% in the case of significant-unexpected findings. An ACR Claims Study in 1997 found that in nearly 60% of malpractice lawsuits involving radiologists, the referring physician had never been directly contacted with urgent or significant or significant unexpected findings.

Radiologists’ responsibility does not end with the report, but with the communication and receipt of the findings. Direct communication of findings whether in person or by phone needs to be documented at the time (it may be required as evidence in a court of law). Berlin noted that the two most common settings for failed communication are outpatient interpretation of non-emergent findings, and emergency department exams during or after usual working hours.

However, in the case of non-urgent findings, some radiologists feel that  with IT-based notifications that trigger action, an immediate phone call to report a non-urgent finding will not only be a nuisance to the referring doctor, but more important, will become substandard care, possibly putting the patient at greater risk. JACR of September 2014 has the Actionable Findings Work Group reply to Prof. Berlin’s concern that all actionable findings should be communicated immediately.

Radiologists should also proofread their reports, especially when most use voice recognition software to dictate their exports. Berlin cited a medical malpractice lawsuit against a radiologist for missing a finding causing delay in diagnosis of cancer. The plaintiff’s attorney pointed out misspellings and typographical errors on the report, and the radiologist admitted that he did not proofread the report, violating the ACR practice guideline that mandates proofreading. Basma’s study published in AJR found that 52% of speech recognition reports had at least one error, 23% with at least one major error.

Perceptions of physicians and radiologists may differ. Berlin cited the study by Bosmans and colleagues published in Radiology in 2011 that found that 37% of doctors felt their interpretation was better than radiologists. 15% of doctors do not read radiologists’ reports. Half of doctors believed that the radiologist did not look at organ or structure if it was not mentioned in the report. 18% of doctors and 68% of radiologists said that reports were proofread.

Some courts have concluded that the radiologist has the duty of care to inform the patient of findings, if the referring physician is not available. The “Swiss Cheese” model is well known. In relation to radiology, there are theoretical safeguards and individuals whose actions should fall in place to prevent errors, but sometimes they all fail.

Back in 1999, the President of the National Breast Cancer Coalition advocated direct reporting of results by mammography facilities, saying, “Women simply cannot rely on referring physicians to notify them.” The Mammography Quality Standards Act now mandates communication to patients in various categories.

Where lab results go, radiology may follow - A U.S. federal law which took effect in April 2014 requires all lab results to be available to patients within 20 days.  The measure has wide support in the era of patient empowerment and shared decision-making. However, others have cautioned that patients lack the knowledge to interpret their results.

Berlin concluded, “Does not failure to directly communicate significant unexpected findings to referring physician and/or patient that causes harm to the patient violate not only the radiologists’ legal duty, but also his ethical and moral duty? Would the radiologist not only be subject to legal consequences, but would he/she not suffer substantial personal guilt as well?”

The topic evidently hit a nerve with the MIR delegates. The panel was asked about leaving a message on a patient’s phone about findings. The difficulty here is that you do not know who will pick up the message. Kahn saw communicating to patients as a new role for the radiologist. After all, who owns that lung nodule? The panel also felt that radiologists should offer consultations, whether by phone (have your number on the report) or in person. Prof. Jarl Jakobsen mentioned that Norway is introducing digital postboxes, which would ensure secure communication to an individual.

The irony of being without wifi while talking about social media was not lost on delegates to the Management in Radiology (MIR)... Read more

Introduction of subspecialised radiology reporting led to a 15 percent improvement in report turnaround time in one Swiss hospital,... Read more

radiology reporting, MIR 2014, actionable findings The importance of communicating critical and incidental findings as soon as possible is not in dispute. The radiologist’s responsibility does not end wit...