No consensus on surveillance imaging after treatment.

Geography affects what post-treatment imaging women with low-risk breast cancer receive in the United States.
A study that analysed follow-up imaging received by women with non-metastatic breast cancer found wide variation across the United States. Of concern was that many low-risk patients receive high-cost procedures that are not recommended by guidelines, while other patients miss out on annual mammograms that are recommended.
Guidelines from the American Society of Clinical Oncology/American Cancer Society and the National Comprehensive Cancer Network recommend that women with non-metastatic breast cancer receive annual physical exams and mammograms, but not full-body imaging with computed tomography (CT), magnetic resonance imaging (MRI), positron emission tomography (PET) or bone scans (Smith & ASCO 2005; Khatcheressian et al. 2013; Gradoshar et al. 2018).
You might also like: Breast Cancer Survivors - Utility of Surveillance MRI
The study, which analysed data on 36,045 women aged 18 to 64 who had surgery for cancer in one breast between 2010 and 2012, is published in JNCCN: Journal of the National Comprehensive Cancer Network (Franc et al. 2018). The researchers found that patients were more likely to receive recommended breast imaging within 18 months of surgery if they were younger or received radiation therapy. About half of the lowest-risk patients—those who received only surgery—received the recommended mammography within 18 months of their initial treatment. Of the cases studied, 70.8 percent of women received at least one dedicated breast image, either a mammogram or a breast MRI, both of which are recommended for these patients. But 31.7 percent had at least one high-cost imaging procedure, and 12.5 percent had at least one PET, neither of which are recommended without a specific clinical symptom. Between 64 and 70 percent of patients who had received a mastectomy and radiation, and were presumably higher risk, received some sort of breast imaging, either mammography or breast MRI.
Cost implications are concerning both for health systems (full-body scans costs between US$2,000 and $8,000) and for patients, who may have large out-of-pocket expenses if they have high-deductible insurance policies
In an email to HealthManagement, lead author, Benjamin Franc, MD, MS, MBA, a professor in the Department of Radiology and Biomedical Imaging, the Center for Healthcare Value, and the Philip R. Lee Institute for Health Policy Studies at the University of California San Francisco, explained that he was inspired to carry out this research having noticed illogical patterns of referral for diagnostic testing as well as having had family members with breast cancer ask whether they should be receiving surveillance imaging after treatment. “The findings of our study suggest that no such consensus exists among doctors on surveillance imaging after breast cancer treatment”, he said. 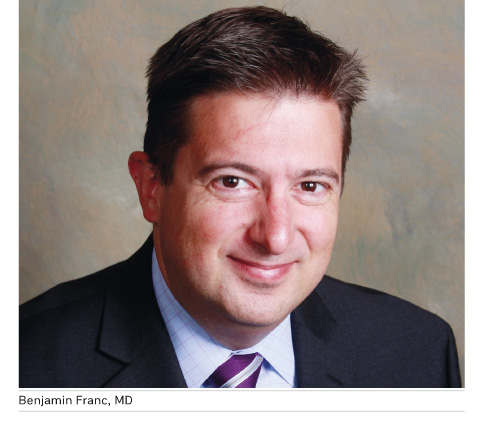 While guidelines for imaging associated with breast cancer diagnosis are specific, a recent research letter by Bensenhaver and colleagues (2018) suggests that adherence to these recommendations has decreased over time, observed Franc. Guidelines associated with advanced imaging for the detection of metastatic disease or regional recurrence of cancer are less well understood, possibly in part due to their vague nature. When guidelines lack specificity, it makes healthcare decision-making difficult: no provider wants to miss the opportunity to diagnose recurrent cancer early, nor does any provider want to downplay their patient’s symptoms or concerns.
Regarding inappropriate use of PET imaging for some patients, Franc noted that the reason is not yet known and is likely multifactorial. Some of the potential levers may include lack of coordinated care among a patient’s many healthcare providers, financial incentives/disincentives of ordering imaging in certain medical practice structures, the attitudes of patients, caregivers, and patient advocates/support groups in any one geographic region, and the prevalence of legal actions in any particular region. He added that their group of researchers is currently studying the factors affecting the decision to utilise PET and other tomographic imaging modalities by understanding the factors that are most important to each of the stakeholders, including patient, family, and physician.
Franc explained that the optimal use of whole body imaging modalities in this patient population has yet to be defined. Although it is possible, using imaging or blood tests, to find cancer recurrence before it produces symptoms or signs, large randomised controlled trials (Palli et al. 1999; GIVIO Investigators 1994; Rosselli Del Turco et al. 1994a, 1994b) and Cochrane database systematic reviews (Rojas et al. 2000; Moschetti et al. 2016) have found that such surveillance offers no benefit in terms of survival or quality of life for patients with Stage I-III (non-metastatic) disease. However, he noted that some of these studies were performed before modalities such as PET-CT came into widespread use in the U.S., so we don’t know if such newer modalities might alter outcomes of breast cancer survivors, and this is an area of active research.
Franc told HealthManagement: “We believe that the potential for “over-imaging” may be particularly concerning in the younger population we studied here because many of these young women will require imaging for other disease processes in the future and should not undergo unnecessary exposure to ionising radiation or financial toxicity if they currently are asymptomatic and unlikely to ever have recurrent or metastatic disease.”

Further research is planned to delve deeper into the potential reasons underlying this variability. Said Franc: “Our future studies aim to provide a foundation of evidence on which to base more specific guidelines for the use of whole body imaging after treatment for breast cancer. We will also explore potential tools that can help patients and providers have an informed discussion around the topic of surveillance testing after treatment.”

Artificial intelligence (AI) is the talk of the radiology world. While AI is unlikely to replace the radiologist, better... Read more

Providing access to mammography for early breast cancer detection can be a challenge, especially when budgets are limited. An analog system that is easy to use and provides images at the right dose is a cost-effective way...