Study: The Utility Of Masimo ORi™ To Reduce Hyperoxia In Critically Ill Patients

Share
Download PDF
Masimo announced today that in a randomized controlled study involving 150 ICU patients recently published as a letter in Intensive Care Medicine, researchers investigated whether monitoring with Masimo ORi™ (Oxygen Reserve Index) could reduce the time critically ill patients spend with moderate hyperoxia, compared to monitoring with oxygen saturation (SpO2) alone.1 ORi is an index of oxygenation in the moderate hyperoxic region, defined as arterial partial pressure of oxygen, PaO2, in the range of 100 to 200 mmHg). As an “index” with a scale between 0.0 and 1.0, ORi can be trended to notify clinicians of changes in a patient’s oxygen reserve. 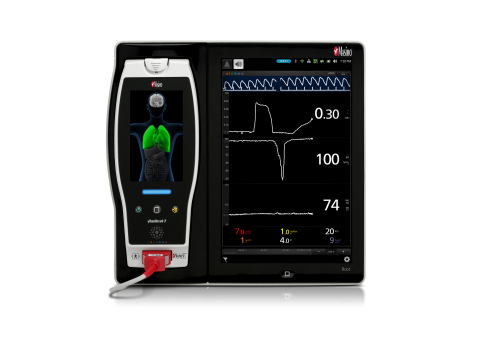 Masimo Root® and Radical-7® with ORi™ (Photo: Business Wire)
Dr. Sigismond Lasocki and colleagues at the Centre Hospitalier Universitaire of Angers, France (CHU Angers), sought to evaluate whether controlling the fraction of inspired oxygen (FiO2) in mechanically ventilated patients based on monitoring with ORi, rather than with SpO2 alone, could reduce the time patients spend in a moderately hyperoxic state (PaO2 ≥ 100 mmHg). 150 critically ill adult patients, all of whom were mechanically ventilated for at least 2 days, were divided randomly into an ORi and a control group. ORi and SpO2 were measured using the Masimo Root® Patient Monitoring and Connectivity Platform and rainbow® sensors. In the ORi group, nurses were instructed to decrease FiO2 when ORi ≥ 0.01. In the control (SpO2 only) group, they were instructed to decrease FiO2 when SpO2 ≥ a prescribed upper limit. PaO2 was measured by analyzing arterial blood gasses.
Data from 75 patients in the ORi group and 71 patients in the control group were analyzed. The researchers found that monitoring with ORi allowed a statistically significant reduction in the percentage of days patients spent with hyperoxia without a statistically significant increase in hypoxia: 14% were hyperoxic (0 to 33%) in the ORi group vs. 33% (11 to 56%) in the control group (p = 0.003). The percentage of hours spent with hyperoxia was also “much lower” using ORi: 7.4% were hyperoxic (0 – 24.8%) in the ORi group vs. 17.3% (3.8 – 43.1%) in the control group for PaO2 ≥ 100 mmHg (p = 0.0069), and 0% (0 – 7.2%) in the ORi group vs. 5.6% (0 – 18.1%) in the control group for PaO2 ≥ 120 mmHg (p = 0.0037).
The researchers concluded that “The use of ORi monitoring to titrate oxygen rates allowed an important reduction of the time spent with hyperoxia compared with the use of SpO2 alone, probably because nurses are reluctant to decrease oxygen rates when SpO2 is in a normal range. A nurse-driven protocol to adjust FiO2 according to SpO2 was already in place in our unit, explaining why the percentage of time with hyperoxia we observed in the control group was much less than usually reported (30 vs 60%). This strategy to decrease oxygen rate according to ORi (which detects high PaO2) may thus be even more efficient in units where there is no protocol to adjust oxygen rates. SpO2 could remain a warning for hypoxia and ORi for hyperoxia. Larger studies are needed to evaluate the clinical benefit of this strategy.”
ORi has not received FDA 510(k) clearance and is not available for sale in the United States.