POC Device Can Test for Sepsis from Drop of Blood

Share
Download PDF
Researchers from the University of Illinois and Carle Foundation Hospital in Urbana, Illinois, USA, have developed a new portable device, which they say is the first to provide rapid, point-of-care measurement of the immune system's response, without any need to process the blood.

The small, lab-on-a-chip device counts white blood cells in total as well as neutrophils, and measures a protein marker called CD64 on the surface of neutrophils. The levels of CD64 surge as the patient's immune response increases.

The research paper, published in Nature Communications, reports on the results from using the device with blood samples from Carle patients in the ICU and emergency room. When a physician suspected infection and ordered a blood test, a small drop of the blood drawn was given to the researchers, stripped of identifying information to preserve patient confidentiality. The team was able to monitor CD64 levels over time, correlating them with the patient's vital signs. They used the parameters measured by the biochip combined with electronic medical record data as input into a machine model to predict sepsis onset. Researchers found that the results from the rapid test correlated well with the results from the traditional tests and with the patients' vital signs. In their paper, they write: “We think that nCD64 can be an indicative biomarker for the recovery outcome, thereby emphasizing continuous nCD64 monitoring at different times throughout the individual patient stay.”

Karen White, MD, an intensive care physician at Carle Foundation Hospital, who led the clinical side of the study, noted that although sepsis is found in around 20 percent of patients admitted to intensive care units, it is difficult to predict the inflammatory response in time to prevent organ failure. “A bedside test that can monitor patients’ inflammatory status in real time would help us treat it sooner with better accuracy," she said. 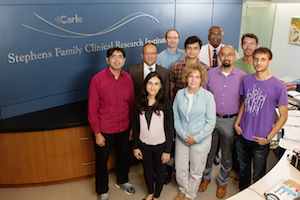 A team of researchers and physicians from the University of Illinois and Carle Foundation Hospital have developed a rapid test to find sepsis markers in a single drop of blood (Image credit: Janet Sinn-Hanlon)


Rather than using current techniques to detect sepsis - monitoring vital signs and identifying the infection source, the new device takes a different approach by focusing on the immune response.

Research team leader Rashid Bashir, professor of bioengineering at the University of Illinois and interim vice dean of the Carle Illinois College of Medicine, said: "One person's immune system might respond differently from somebody else's to the same infection. In some cases, the immune system will respond before the infection is detectable. This test can complement bacterial detection and identification. We think we need both approaches: detect the pathogen, but also monitor the immune response."

"By measuring the CD64 and the white cell counts, we were able to correlate the diagnosis and progress of the patient - whether they were improving or not," said Umer Hassan, a postdoctoral researcher at Illinois and the first author of the study. "We hope that this technology will be able to not only diagnose the patient but also provide a prognosis. We have more work to do on that."

Prof. Bashir  told ICU Management & Practice in an email that the team is working on measuring additional white blood cells and cell surface markers, and also plasma proteins from patient samples. He added that the researchers would like to do additional clinical studies at additional hospital sites and patient samples to test the device and their approach. They hope to get the testing time down to 15 minute or less.

"We want to move the diagnosis point backward in time," Bashir said. "The big challenge in sepsis is that no one knows when you get infected. Usually you go to the hospital when you already feel sick. So the goal is that someday you can be testing this at home, to detect infection even earlier if you can."

Patients with severe sepsis who experience rapid, early deterioration and death are of particular concern. However, given the... Read more

On World Sepsis Day, 13 September, JAMA has published new research into the incidence of sepsis in the United States. The... Read more

Association between statin and sepsis outcome

A new study published in the journal CHEST suggests that the drug specific effect of statins in sepsis is not correlated to their... Read more

Sepsis, diagnosis, point-of-care A new device has the potential to test fast for sepsis. Researchers from the University of Illinois and Carle Foundation Hospital in Urbana, Illinois, USA, have developed a new portable device, which they say is the first to provide rapid, point-of-care