PARAMEDIC2: Is epinephrine a safe and effective treatment for cardiac arrest?

Share
Download PDF
In addition to early initiation of cardiopulmonary resuscitation (CPR), treatment strategies for out-of-hospital cardiac arrest have included the use of various drugs, but there is limited evidence that such medications are effective. Results of the  clinical trial (Pre-hospital Assessment of the Role of Adrenaline: Measuring the Effectiveness of Drug administration In Cardiac arrest - PARAMEDIC2) indicate that the use of epinephrine (adrenaline) results in less than 1% more people leaving hospital alive – but nearly doubles the survivors' risk of severe brain damage.

“We have found that the benefits of adrenaline are small – one extra survivor for every 125 patients treated – but the use of adrenaline almost doubles the risk of a severe brain damage amongst survivors,” said study lead author Gavin Perkins, Professor of Critical Care Medicine in Warwick Medical School at the University of Warwick. The findings, published in The New England Journal of Medicine, raise important questions about the future use of epinephrine in such cases and will necessitate debate amongst healthcare professionals, patients and the public.
Each year 30,000 people sustain a cardiac arrest in the UK and fewer than one in 10 survive. The best chance of survival comes if the cardiac arrest is recognised quickly, someone starts CPR and defibrillation is applied without delay. The use of epinephrine is intended to increase blood flow to the heart, thus improving the chance of restoring a heartbeat. However it also reduces blood flow in tiny blood vessels in the brain, which may worsen brain damage. Observational studies involving over 500,000 patients have reported worse long-term survival and more brain damage among survivors who were treated with epinephrine.
Concern about the use of epinephrine as a treatment for out-of-hospital cardiac arrest (OHCA) led the International Liaison Committee on Resuscitation to initiate a placebo-controlled trial to determine whether the use of epinephrine is safe and effective in such patients. The PARAMEDIC2 trial was a randomised, double-blind trial involving 8,014 OHCA patients in the UK. The trial ran from December 2014 through October 2017.
Paramedics at five National Health Service ambulance services administered either parenteral epinephrine or saline placebo to the patients, along with standard care. The primary outcome was the rate of survival at 30 days. Secondary outcomes included the rate of survival until hospital discharge with a favourable neurologic outcome.

Of 4,012 patients given adrenaline, 130 (3.2%) were alive at 30 days compared with 94 (2.4%) of the 3,995 patients who were given placebo. However, of the 126 patients who had been given adrenaline and who survived to hospital discharge 39 (30.1%) had severe brain damage, compared with 16 (18.7%) among the 90 survivors who had been given a placebo. In this study, a poor neurological outcome (severe brain damage) was defined as someone who was in a vegetative state requiring constant nursing care and attention, or unable to walk and look after their own bodily needs without assistance. 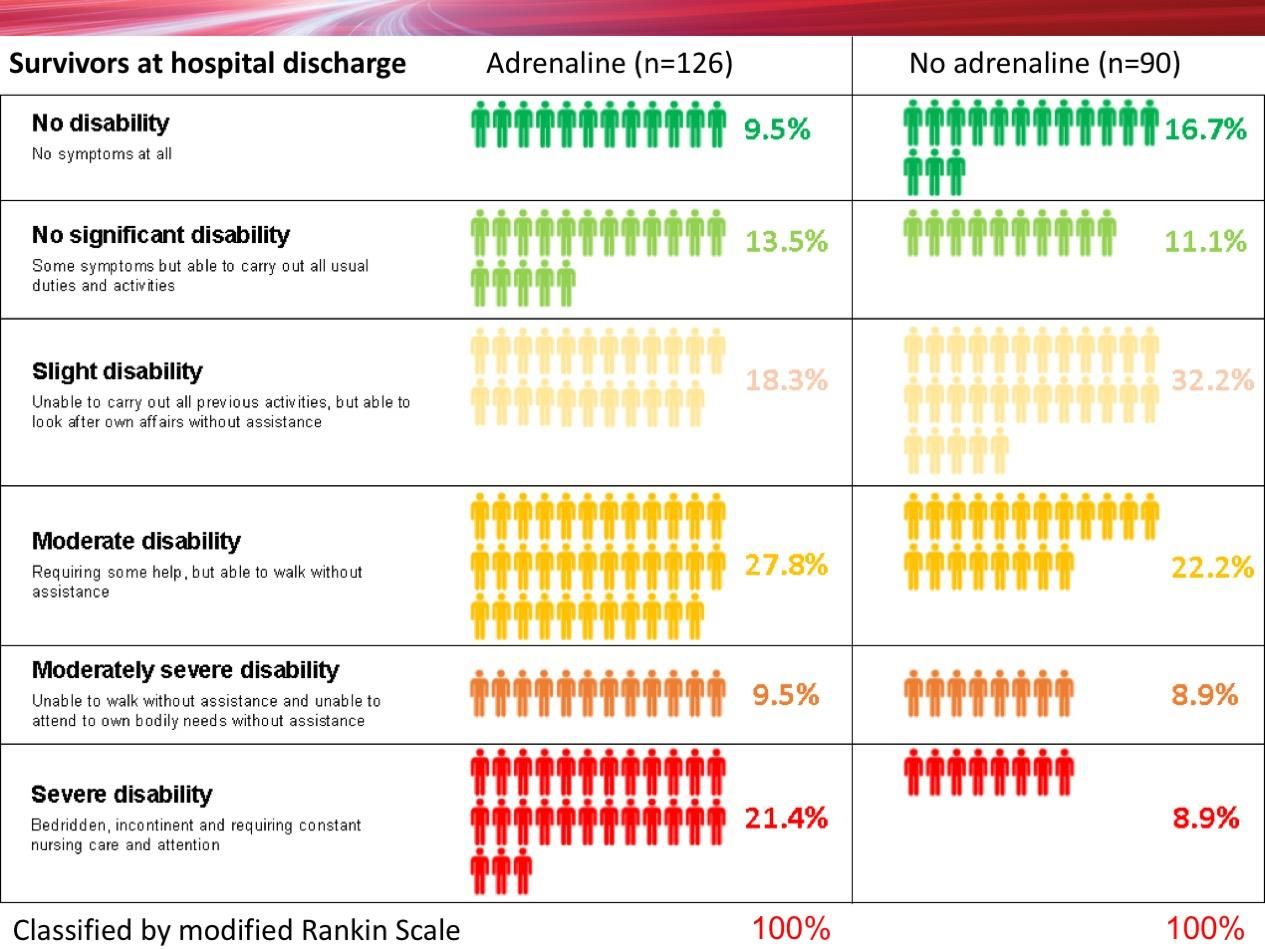 Image credit: Top and above - University of Warwick

The reasons why more patients survived with adrenaline and yet had an increased chance of severe brain damage are not completely understood. One explanation is that although adrenaline increases blood flow in large blood vessels, it paradoxically impairs blood flow in very small blood vessels, and may worsen brain injury after the heart has been restarted. An alternative explanation is that the brain is more sensitive than the heart to periods without blood and oxygen and although the heart can recover from such an insult, the brain is irreversibly damaged.
“Patients may be less willing to accept burdensome treatments if the chances of recovery are small or the risk of survival with severe brain damage is high. Our own work with patients and the public before starting the trial identified survival without brain damage is more important to patients than survival alone," Professor Perkins explained.
The PARAMEDIC2 trial has answered one of the longest standing questions in resuscitation medicine, according to Professor Jerry Nolan, from the Royal United Hospital Bath, who is a co-author of the study.  "Taking the results in context of other studies, it highlights the critical importance of the community response to cardiac arrest," Prof. Nolan pointed out. "Unlike adrenaline, members of the public can make a much bigger difference to survival through learning how to recognise cardiac arrest, perform CPR and deliver an electric shock with a defibrillator."
In the UK, draft legislation is to be put to Parliament that will make it compulsory for school children to learn first aid, including CPR in secondary school, something that has been in place in other countries for decades. 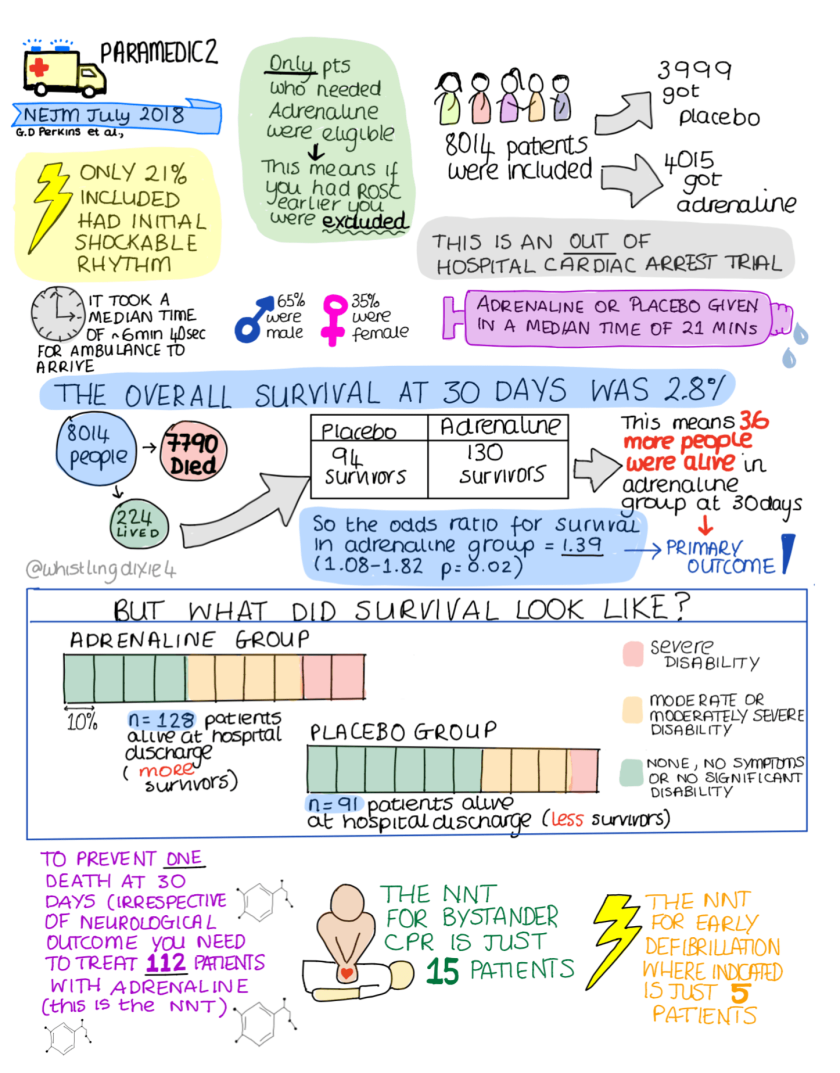 Sources: The New England Journal of Medicine; University of Warwick

Perfusion-guided patient-specific resuscitation could be the next major step in improving cardiac arrest survival with good... Read more

Cardiac arrest, a leading cause of admission to the intensive care unit (ICU), is associated with high mortality. Current illness... Read more