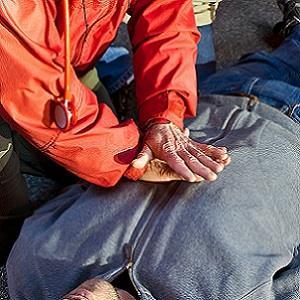 Share
Download PDF
Two new studies, one conducted in the U.S. and another in Japan, indicate that use of interventions such as cardiopulmonary resuscitation and automated external defibrillators (AEDs) by bystanders and first responders has increased and was associated with improved outcomes for persons who suffered an out-of-hospital cardiac arrest. Both studies are published in JAMA.

Out-of-hospital cardiac arrest (OHCA) is an increasing health concern worldwide, with poor prognoses. Data for the Japanese study were obtained from the national OHCA registry, which includes all patients with OHCA transported to the hospital by emergency medical services (EMS). The data included patients' characteristics, prehospital interventions (including defibrillation using public-access AEDs and chest compression) and outcomes.

Further increases in use of chest compression by bystanders should be promoted, write Shinji Nakahara, MD, PhD, of the Kanagawa University of Human Services and co-authors. “In Japan it is used in just 50 percent of patients and is increasing slowly...Fire departments provide training to more than 1,400,000 citizens every year to increase the prevalence of skills in basic resuscitation procedures, including chest compression and AED use. This effort should be further strengthened.”

The U.S. study included 4,961 patients with OHCA for whom resuscitation was attempted and who were identified through the Cardiac Arrest Registry to Enhance Survival (2010-2013). First responders included police officers, firefighters, rescue squad, or life-saving crew trained to perform basic life support until arrival of the EMS.

“Our findings suggest the possibility of improving outcomes by strengthening first-responder programmes, in addition to increasing the number of bystanders who could then provide CPR, including those assisted by emergency dispatchers, and by improving EMS systems. This is particularly important for cardiac arrests that occur in residential areas and in areas with a long EMS response time, where public access defibrillation programmes are unlikely to be implemented,” write Carolina Malta Hansen, MD, of the Duke Clinical Research Institute, Durham, N.C., and co-authors.

A new military trauma care protocol for managing haemorrhage and resuscitation may assist in saving both combat and civilian patients,... Read more

A hospital in the UK has adopted a novel technique for technical skill training — used initially for difficult airway training... Read more

healthmanagement, cardiac arrest, first responders, resuscitation, defibrillation, bystander interventions Two new studies, one conducted in the U.S. and another in Japan, indicate that use of interventions such as cardiopulmonary resuscitation and automated external defibrillators by bystanders have increased and were associated with improved outcomes for per