#LIVES2019: Should We Treat Fever in Critically Ill Patients Without Acute Brain Pathology?

Share
Download PDF
In one of the sessions at #LIVES2019 in Berlin, Prof. Frank Van Haren of Canberra Hospital, Australia, presented findings from the Randomised Evaluation of Active Control of Temperature versus Ordinary Temperature Management (REACTOR) trial. The question which this study aimed to answer was whether there is a reason why fever should be actively prevented and treated in all critically ill patients without an acute brain pathology.
It's unclear whether fever is harmful or helpful in ICU patients. In a paper from Young et al. (2012), study researchers looked at two big databases - one from the UK and one from Australia/New Zealand, with more than 600,000 patients and evaluated the peak temperature in the first 24 hours of ICU admission. Findings showed that in patients who had an infection, fever or an increased peak temperature reduced the odds of dying whereas in patients who had no infection, an increased temperature or fever in the first 24 hours of ICU admission increased the odds of dying.
Prof. Van Haren explained that fever increases metabolic and physiological demands, but ICU patients may have limited physiological reserves and their tolerance of these physiological demands may be poorly tolerated. The benefits of fever may be steady throughout intensive care patients, but the cost of fever may be dependent on the physiological reserves of these critically ill patients. If the physiological reserves are high, fever may be beneficial and may not require treatment, but if physiological reserves are low, the cost of fever may be high and should be treated to improve outcomes.
There are two ways that fever can be treated. It can be done pharmacologically or through cooling. When patients are cooled, for every ºC the temperature comes down, oxygen consumption comes down by about 10% ºC. Cooling also reduces cardiac output and minute ventilation and thus has a clear effect on the physiological reserves of critically ill patients.
Another previous study published a couple of years ago and also authored by Paul Young, looked at paracetamol versus placebo in patients who had fever and suspected infection. The study was not designed as a fever intervention, but was conducted to compare placebo with paracetamol because it was observed that paracetamol was being used widely around the world for patients with fever and infection in ICU. Findings of this study did not show any significant difference between paracetamol or placebo in terms of mortality or ICU free days. The temperature difference between placebo and paracetamol patients was only about 0.3 ºC.
Another major study was done in this field – Fever Control Using External Cooling in Sepsis Shock - in which 200 patients were randomised and analysed. Quite a significant difference was observed in in temperature and cooling decreased day 14 mortality but not hospital mortality. This was a very specific patient group with septic shock.
Prof. Van Haren pointed out that cooling patients to hypothermia when they have a severe infection is probably harmful. Two large important studies published in JAMA and Lancet - one with severe bacterial meningitis and the other one with septic shock – showed that patients who were cooled down to hypothermia had significant harm. Both studies was stopped prematurely.
In the REACTOR trial, researchers compared active control of temperature versus ordinary temperature management (or standard care). This was a multicentre, Phase II, open label feasibility trial which included 8 centres. The goal was to evaluate whether there was any incentive to do a larger Phase 3 trial. 84 patients were included in the study. All patients (18 years or older) had to be invasively ventilated in the ICU and had to be expected to remain ventilated beyond the next calendar day. Patients had to be unresponsive to voice and sedated and they had to have a temperature of 37.8 ºC or higher in the previous 12 hours.
Patients were randomised to either the active treatment arm or the standard care arm. All of the study patients were relatively sick. Around 80% of the patients in both groups received antimicrobials indicating that the clinicians felt that they possibly had an infection that was the cause of their fever.
Clinicians in the control arm were not required to follow any specific treatment protocol. This was a trial where standard care was allowed. However, clinicians were asked not to give paracetamol unless it was absolutely necessary and if it was given, it had to be given regularly and not through IV. In the intervention arm, the clinicians had a treatment protocol. They were to prescribe regular IV paracetamol. If the temperature was still high, they were expected to use active cooling. This could be simple cooling (using fan and some wet towels) or cooling mattresses and anything else required to get the temperature down to normothermia.
Findings showed a much higher use of paracetamol in the active temperature management group compared to control. More hours of cooling were observed in the active temperature management. One surprising finding from this study was that a high percentage of patients got physical cooling. In the standard arm, more than 50% of patients received a form of physical cooling. This was unexpected as the researchers didn’t think that would be part of standard care. Overall, cooling in patients with fever in intensive care was much higher than expected.
The primary outcome was the separation of temperature in a two arms. Although there was a statistically significant separation between the arms, it was only a small difference. Not much fever was left in any of the patients including those in the standard arm. Fever disappeared pretty quickly in all patients independent of which arm they were in. 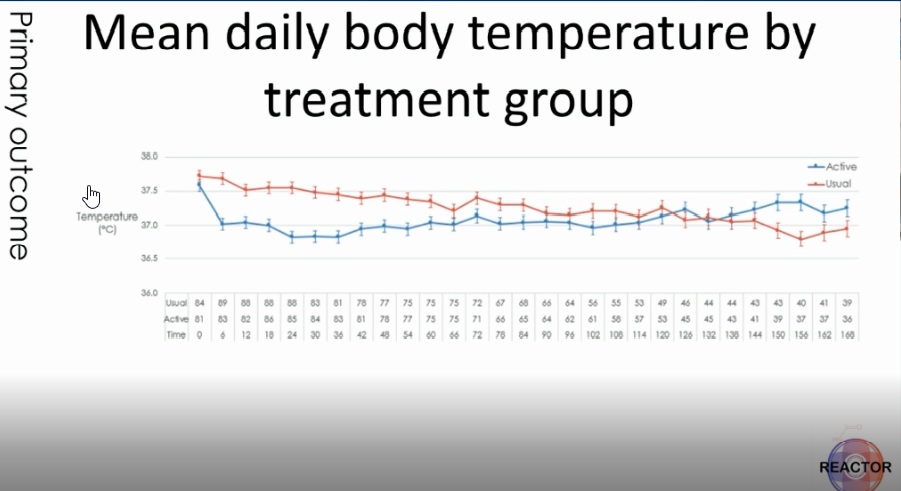 No significant differences were observed in secondary outcomes either whether it was in terms of ICU free days or hospital mortality. There was a significant decrease in heart rate in the active temperature management group, but no other differences in blood pressure or respiratory rate were observed and there were no significant differences in ICU length of stay or hospital length of stay in all patients and in survivors and non-survivors.  There were also no difference in ventilator free days, vasopressor free days, antibiotics, and blood cultures.
Overall, there was only a difference of 0.5 ºC between the two arms and hence it can be seen that there was no major clinical benefit, although this study wasn't designed or powered to show clinical benefit. It was only designed or powered to see if temperature could be separated to inform a larger study.
Prof. Van Haren concluded that active temperature management reduced body temperature compared with usual care in this patient group, but fever disappeared quickly in both groups. Even in patients who were in the standard arm, the magnitude of temperature separation was pretty small. There was no difference in patient-centred outcomes. The findings do not provide any strong support for a Phase 3 clinical trial using this particular design in this particular patient population. So to answer the question that was initially asked: should we actively prevent and treat fever in critically ill patients without acute brain pathology? Probably not.
Source: Prof. Frank Van Haren's Presentation @ESICM 2019
Image/Slide Credit: Prof. Frank Van Haren

#CoronavirusOutbreak: Caring for the Critically Ill - Trends, Treatment and Mortality

COVID-19 is associated with severe disease requiring intensive care in approximately 5% of proven infections. As with similar... Read more

Post-hoc Analysis of the NONSEDA Trial

In recent years, there has been an increase in awareness of minimising sedation in the ICU. Several benefits of avoiding heavy... Read more