Xenon, a chemically inert but biologically active monatomic gas, has been applied in patients for anaesthesia/sedation, and most recently in the critical care of patients with acute ongoing neurological damage.
Following preclinical evidence that xenon has ameliorative activity in several pathobiologic pathways that are involved in central nervous system injury, xenon was shown to be effective at improving both morphology and function in a series of models of hypoxic/ischaemic injury that simulate stroke (both haemorrhagic and ischaemic), neonatal asphyxia, as well as the ischaemic-reperfusion injury that occurs in the post-cardiac arrest syndrome (PCAS).
These promising findings prompted a Phase 2 RCT that revealed that a 24-hour xenon administration during targeted temperature management (TTM) resulted in significantly less brain damage than TTM alone in PCAS. A pivotal, multicentre, Phase 3 RCT is now underway to establish the efficacy (primary endpoint is survival with good functional outcome) and safety of xenon in PCAS.
Anaesthetic and sedative agents are typically administered in perioperative settings to facilitate surgical and discomfort-inducing procedures. Because of the pleiotropic effects of these powerful drugs, investigators have trialled these agents for other indications including the use of ketamine for refractory depression (McCloud et al. 2015), dexmedetomidine to facilitate detoxification from alcohol and substance abuse disorders (Wong et al. 2015), and propofol for nausea and vomiting (Griffiths et al. 2012).
Following the market authorisation for general anaesthesia in 2007, xenon’s use has extended to organ protection because of its multifaceted cytoprotective actions (Maze 2016). In this report, we focus on the neuroprotective properties of xenon.

Prior to considering the possible clinical applications of xenon, we reflect on the pathophysiologic processes that characterise the clinical conditions for which xenon’s neuroprotective properties may be exploited.
Similar, but not identical, pathophysiologic mechanisms propagate ongoing damage whether the acute neurological injury is initiated by a stroke (i.e. ischaemic and haemorrhagic), cardiac arrest, or traumatic brain injury.

Ischaemia is the cause in ~85% of adult stroke victims. Dirnagl and colleagues (2014; 1999) have offered important insights into the potentially-modifiable processes that obtain in ischaemic stroke (Figure 1). Sudden interruption of perfusion to discrete brain regions heralds a phase of excitotoxicity due to ischaemia-induced depolarisation of glutamatergic neurons causing release of the excitatory neurotransmitter, glutamate. Activation by glutamate of its cognate receptor subtypes results in a massive influx of calcium cations that produces neuronal death through necrosis. In the subacute phase of ischaemic stroke, cell death occurs through apoptotic processes. In the later phases brain damage can be produced by inflammatory processes initiated by engagement of the innate immune response (Dirnagl et al. 1999). 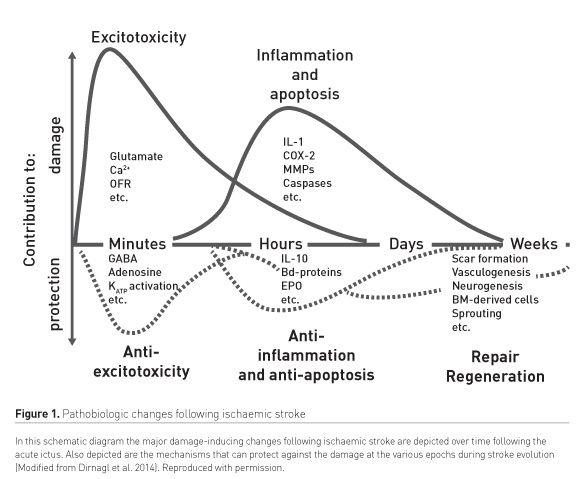 The haemorrhagic form of stroke is mainly caused by subarachnoid and intracerebral haemorrhage. The former type accounts for 5 % to 10% of all strokes and is mostly attributed to rupture of an aneurysm. Apart from the decreased perfusion and ischaemia in the territory of the ruptured blood vessel engendering excitotoxicity, additional pathophysiologic processes supervene due to the collection of extravascular blood (cytotoxic effect) (Budohoski et al. 2014). Because of perturbed cerebrospinal fluid hydrodynamics, the intracranial pressure may rise resulting in failure to adequately perfuse other brain regions. Together with vasospasm, disruption of the blood-brain barrier and the supervention of inflammation, delayed cerebral ischaemia exacerbates the patient’s neurologic deficits. However, the contribution of vasospasm to delayed cerebral injury following subarachnoid haemorrhage (SAH) has been challenged (Budohoski et al. 2014). It is notable that SAH remains an unmet treatment challenge, and novel interventions, including xenon, are worthy of consideration.

Cardiac arrest is the classical example of ischaemic-reperfusion injury in which the absence of any perfusion to the brain provokes excitotoxicity (Neumar et al. 2008). Successful resuscitation and restoration of spontaneous circulation causes a new pathophysiologic process characterised by apoptosis and neuroinflammation.

Traumatic brain injury encompasses heterogeneous conditions from diverse types of trauma of varying severity; as such, different pathophysiological pathways may be involved and major international efforts are more precisely characterising the evolution of injury (International Initiative for Traumatic Brain Injury Research [InTBIR - intbir.nih.gov]; Transforming Research and Clinical Knowledge in Traumatic Brain Injury [TRACKTBI - tracktbi.ucsf.edu]). From these efforts, much has been learned about genetic factors that modulate the host-response to injury by proteins such as apolipoprotein E 4 (Lawrence et al. 2015), mitochondrial DNA haplotype (Bulstrode et al. 2014) and brain-derived neurotrophic factor (Failla et al. 2016). Physiologic monitoring has yielded information on dysregulation of intracranial pressure, autoregulation of brain perfusion, brain oxygenation and metabolism, inflammation and cortical electrical activity. Macroscopically several types of lesions can be distinguished including shearing of white matter tracts, contusions, haematomas and oedema. A secondary wave of damage occurs hours to days after the traumatic event that is characterised by excitotoxicty, free radical generation, mitochondrial dysfunction, mass effect, ischaemia and inflammatory responses (Maas et al. 2008). Especially in the setting of repetitive trauma, processes are initiated that result in long-term consequences such as dementia, Parkinsonism, and epilepsy.

Clinical evidence for the neuroprotective properties of xenon

The Xe-hypotheca trial (NCT 00879892 - clinicaltrials.gov/ct2/show/NCT00879892) studied the Effect of Inhaled Xenon on Cerebral White Matter Damage in Comatose Survivors following an Out-of-Hospital Cardiac Arrest (Laitio et al. 2016). The trial, which was undertaken at the medical centres of Turku and Helsinki Universities in Finland, enrolled 110 successfully resuscitated (restoration of spontaneous circulation [ROSC] within 45 minutes of a witnessed cardiac arrest with an initial shockable rhythm) but still comatose patients. The trial compared xenon (up to 50% by inhalation) plus the standard of care (SOC) versus SOC alone for the primary endpoint of white matter brain damage (global fractional anisotropy [GFA] derived from a diffusion tensor imaging sequence); both arms were inclusive of TTM administered for 24 hrs. Assessment of the GFA revealed significantly (P=0.006) reduced brain damage in the subjects randomised to receive xenon. There was 41.7% less damage to white matter tracts (from the approximately 115,000 voxels assessed in each patient) in the Xenon + SOC vs SOC. alone group. The relative damage to the major white matter tracts in the two groups is depicted (Figure 2).

Xe-HYPOTHECA was not powered to detect differences in functional endpoints; reduction in 6-month mortality rate - 27% in the xenon group and 35% in the SOC group (adjusted hazard ratio, 0.49 [95% CI, 0.23-1.01]) - did not achieve statistical significance (P = 0.053). The degree of white matter injury was the strongest predictor of mortality at 6 months.

Clinical evidence for the myocardial protective properties of xenon

A predefined secondary objective of the XeHypotheCA Trial was to assess the effect of inhaled xenon on myocardial ischaemic damage. Troponin-T (TnT) levels were measured at hospital admission, and at 24h, 48h and 72h post-cardiac arrest (Arola et al. 2017). The baseline characteristics did not differ significantly between the groups. Results are tabulated (Table 1). After adjustments for age, gender, study site, primary coronary percutaneous intervention (PCI), and norepinephrine dose, the mean standard deviation post-arrival incremental change of the ln-transformed troponin-T at 72 hours was 0.79 (1.54) in the xenon group and 1.56 (1.38) in the control group (adjusted mean difference, -0.66 [95% CI, -1.16 ― -0.16], P=0.01). The decline of TnT from the peak value at 24h to 72h was significantly greater in the xenon group than in the control group (p =0.0008). The effect of xenon on the change in the troponin-T values did not differ in patients with or without PCI or in those with a diagnosis of ST-elevation myocardial infarction (group by PCI or STEMI interaction effect, P=0.86 and P=0.71, respectively). In comparison with hypothermia alone, inhaled xenon combined with hypothermia resulted in less severe myocardial injury as demonstrated by the significantly reduced release of troponin-T. 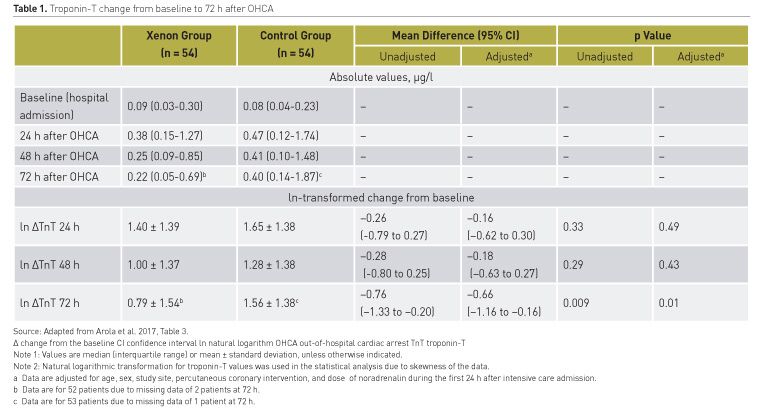 Apart from the potential use of xenon for postoperative sedation (Bedi et al. 2003), and for selected intraoperative settings, e.g., for neurosurgical procedures (Rylova and Maze 2018) it is unlikely that xenon will be considered for routine use in perioperative settings both because of the availability of cheaper alternatives and because of the need for recirculating systems to minimise consumption of xenon.
Nonetheless, in critical care settings where there is an unmet medical need, e.g., Post-Cardiac Arrest Syndrome, xenon’s cytoprotective effects may be further appreciated for its physico-chemical properties that result in a near instantaneous onset of action together with a low potential for toxicity through its chemical non-reactivity. A pivotal 1436-patient Phase 3 Trial (Xenon for Neuroprotection During Post-Cardiac Arrest Syndrome in Comatose Survivors of an Out of Hospital Cardiac Arrest (XePOHCAS - NCT03176186 - clinicaltrials.gov/ct2/show/NCT03176186]) has been launched to determine the efficacy and safety of 24h inhalation of xenon to improve survival with good functional outcome in successfully resuscitated (ROSC ≤ 30 min), but still comatose, victims of a witnessed cardiac arrest.

Production and availability of xenon

Xenon is an extremely rare element present in the atmosphere at approximately 88 parts/billion. Xenon is produced by a process of cryogenic distillation in which air is fractionated into its primary components by cooling at high pressure until it liquefies; the different components are then separated according to physical characteristics, including boiling points and density, within specialised cryogenic columns. The process consumes large amounts of energy and those fractions which are found in low concentrations (i.e., xenon) require multiple distillations, and are therefore extremely expensive to produce to medical grade purity of 99.999%. The estimated total supply of xenon is thought to be 14 million litres, of which 50% could theoretically be delivered in medical grade. Approximately 50L of xenon is required for a 24-hour intervention; under these conditions approximately 140,000 patients could be treated annually.

Xenon, the noble elemental gas, may benefit the critically ill patient that has ongoing acute neurological injury because it reduces the activity in several of the pathobiologic pathways that obtain in these conditions. A definitive, pivotal, multicentre, trial to establish xenon’s safety and efficacy in the setting of post-cardiac arrest syndrome is now being prosecuted. If successful, the next challenge will be to increase the production of medical grade xenon through the retrofitting of oxygen-purification plants. Further refinements in the recirculation and recycling of xenon can further improve the availability of this scarce resource.

Mervyn Maze is a co-founder, and shareholder of equity in NPXe Ltd, a company that seeks to commercialise neuroprotective applications of xenon. TL is a member of the Trial Executive Committee for XePOHCAS, a phase 3 RCT designed to test the efficacy and safety of patients with post-cardiac arrest syndrome. The XePOHCAS trial is sponsored by NeuroproteXeon.

Optimising sleep in the ICU

Disordered sleep is common in ICU patients. While many of the reasons for this are impossible to modify, and others rely... Read more

brain injury, Xenon Xenon, a chemically inert but biologically active monatomic gas, has been applied in patients for anaesthesia/sedation, and most recently in the critical care of patients with acute ongoing neurological damage. Following preclinical evidence that xenon