What a difference a drug makes?

Share
Download Article Back
Asking why the patient needs to be sedated is as important as the choice of drug for sedation.

Intensivists should ask why they use sedation every time they order it. Sedation is used to reduce the burden and stress of critical illness. Sedative agents mixed with analgesic agents reduce pain and keep the patient calm, especially at night. Intensivists need to look for the cause of agitation and use an algorithm to eliminate the most common causes of agitation e.g. urinary retention, pain.

How much and what sedation?

Less is better in sedation. Side effects of sedation include prolonged mechanical ventilation, increased risk of infection, longer hospital and ICU length of stay and risk of mortality.

The ideal ICU sedation drug has a good ability to provide analgesia, is rapid onset and easy to titrate. Drugs for sedation should allow the possibility to communicate haemodynamic instability and not be associated with delirium.

The concept of titrating the drug to its effect is good. Intensivists should define the target of sedation so that the more drug used the closer to the target is achieved. Sedation is very time-sensitive. Sedating the patient with shock and high agitation so that they can be intubated is essential and they need a high dose for some hours.

The 2018 guidelines for management of pain, agitation/sedation, delirium and immobility and sleep disruption recommend propofol or dexmedetomidine over benzodiazepines for sedation in critically ill, mechanically ventilated adults who are not undergoing cardiac surgery [conditional recommendation, low quality of evidence] (Devlin et al. 2018). A 2013 meta-analysis of benzodiazepine vs non-benzodiazepine-based sedation for mechanically ventilated critically ill patients found that benzodiazepine-based regimens were associated with more ICU days and longer duration of mechanical ventilation, and probably more delirium (Fraser et al. 2013). Lonardo et al. (2014) compared midazolam and lorazepam in adult ICU patients in a retrospective, multicentre study for single ICU admissions with a single ventilation event (>48h) who were treated with continuously infused sedation. There were 2,250 propofol-midazolam and 1,054 propofol-lorazepam matched patients. Patients treated with propofol had a reduced risk of mortality, increased likelihood of earlier ICU discharge and earlier discontinuation of mechanical ventilation.

How to use sedation? 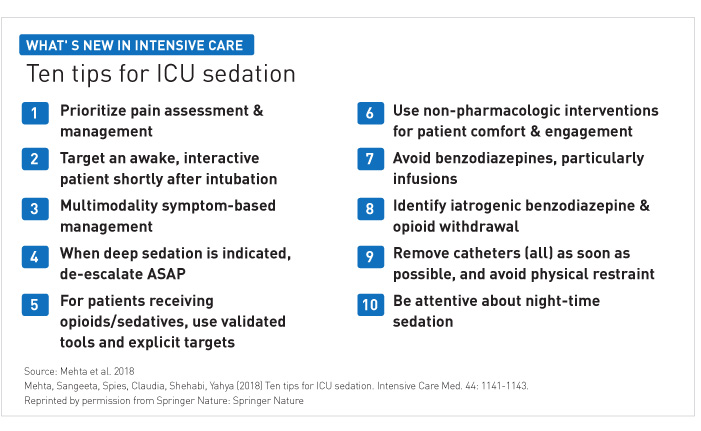 Tailor the drug to the patient status

The Sedation Practice in Intensive Care Evaluation (SPICE) study compared deeply sedated with lightly sedated (RASS score [-2 to +1]) patients. Patients who had light sedation within the first 4 hours had reduced time to extubation and improved probability of survival (Shehabi et al. 2012). Other studies demonstrated the same results with shorter time to extubation and better survival in patients with light sedation during the first hours (Shehabi et al. 2013; 2018); the probability of 180-day survival increased with how efficiently sedation was decreased (Shehabi et al. 2018). Importantly, the results did not depend on the drug used but did depend on how they used the drugs.

Some delirium is associated with sedation and is rapidly reversible so it is advised to coordinate delirium assessment with a daily sedation stop (Patel et al. 2014). Delirium is sometimes the result of inflammation and in patients with septic shock there is not significant benefit from dexmedetomidine (Kawazoe et al. 2017).

Does the choice of drug make no difference in all clinical contexts? 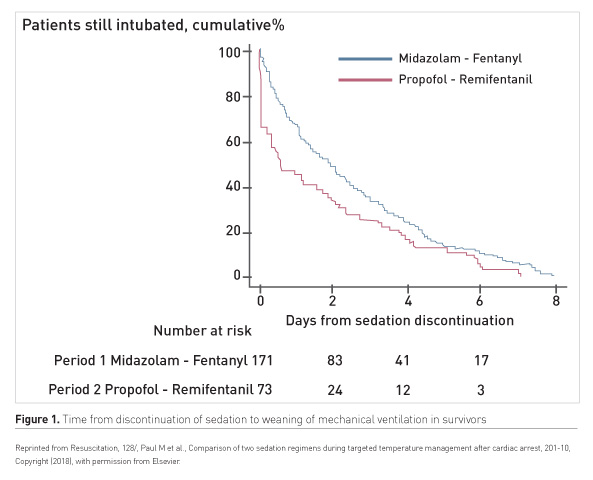 How long to sedate?

Intensivists need to consider length of sedation. When strict protocols to target a specific RASS score are implemented, it is possible to reduce sedation, and the proportion of patients on sedation after five days goes down dramatically.

Always ask why the patient needs sedating. Protocols to target the level of sedation are extremely helpful and will reduce the proportion of patients who are sedated for a long period. The less sedation the better—for duration of mechanical ventilation and survival.

How to manage sedation analgesia for patient-centred care in the ICU.   In the concept of patient-centered care, sedation... Read more

Managing sedation analgesia for patient-centred care in the ICU   Pain management and sedation are closely linked in... Read more

Antifungal treatment in the ICU

The secrets of the abdomen Overview of abdominal point-of-care ultrasound use in the ICU, potential diagnoses and findings... Read more

sedation, Drugs for Sedation Asking why the patient needs to be sedated is as important as the choice of drug for sedation. Intensivists should ask why they use sedation every time...