Evidence shows that sonography of the brain can be used to visualise most of the intracranial structures, allowing estimation of the risk posed by life-threatening conditions, such as raised ICP, intracranial haematoma, hydrocephalus and midline shift.

Brain ultrasound is increasingly used in the critical care setting. This technology is noninvasive, associated with low radiation exposure, and available at the bedside. Thanks to recent technological advances, sonography of the brain can be used to visualise most of the intracranial structures (Bogdahn et al. 1990). In complement to transcranial Doppler, brain ultrasound can be performed to estimate the risk of raised intracranial pressure (ICP), using ocular sonography of the optic nerve sheath, as well as monitor intracranial haematoma or hydrocephalus, and precisely measure midline shift.

In 1806 Tenon described the optic nerve sheath and the optic sclera as continuous with the dura mater. In vivo, the cerebrospinal fluid (CSF) circulates in this space, from the posterior to the anterior part. This CSF is subject to similar pressure changes to those in the intracranial and lumbar compartments (Liu and Kahn 1993; Hansen and Helmke 1996). The retrobulbar part of the perioptic subarachnoid space is surrounded by fat and is therefore distensible. The optic nerve sheath diameter (ONSD) can increase as pressure raises and is accessible to ultrasonographic measurement. In 1997 Hansen and Helmke showed for the first time in humans that after an intrathecal lumbar infusion of Ringer’s solution ONSD dilation reaches a maximum at peak CSF pressure (Hansen and Helmke 1997). This close relationship between ICP and dilation of the orbital perineural subarachnoid space has been confirmed by other studies using ultrasound (Blaivas et al. 2003; Geeraerts et al. 2007) and magnetic resonance imaging (Geeraerts et al. 2008; Rohr et al. 2011; Kimberly and Noble 2008). In 2011 two meta-analyses concluded that there is an excellent correlation between invasive ICP and ONSD (Dubourg et al. 2011; Moretti and Pizzi 2011). The exact cut-off of ONSD that may predict an ICP above 20mmHg remains to be determined. All the studies but one found that a cut-off between 5.2 and 5.9mm predicted an ICP above 20mmHg (Rajajee et al. 2011). Using the 5.9mm threshold, the sensitivity was 95% and the specificity 79% (Dubourg et al. 2011).

A high frequency, superficial probe of at least 7.5MHz must be used. Depth should be set at 4cm, and the two-dimensional mode used. The ONSD should be measured 3mm behind the retina in the nerve axis (Figure 1). A thick layer of gel is applied over the closed upper eyelid and the probe is placed on the lateral area of the closed eye. It has been shown that ONSD measured in the transversal plane is consistently larger than the one in the sagittal plane (Blehar et al. 2008). 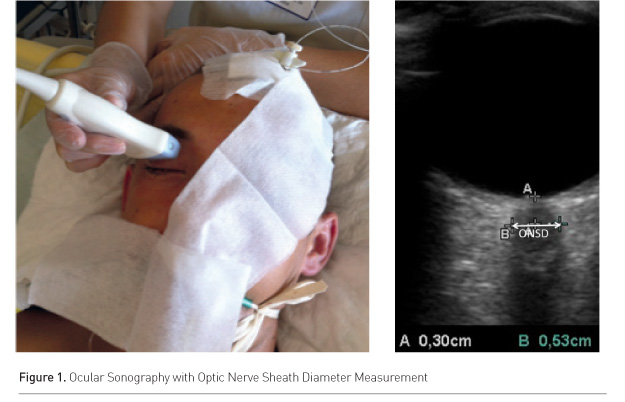 In 1993 Becker et al. described the performance of transcranial duplex sonography (TDS) to distinguish ischaemic stroke and intracranial haematoma in 48 patients (Becker et al. 1993). Haematomas are hyperechogenic and brain ischaemia is hypoechogenic. Of the 28 patients with intracranial haematoma, the CT findings were confirmed in 24 using sonography. The main cause for failure was a poor acoustic window. Intraventricular haemorrhage was correctly found in all patients with a good acoustic window. Maurer et al. (1998) compared TDS and CT scan usage to diagnose stroke aetiology in 151 patients admitted for acute neurologic deficit in a simple blinded prospective study. A poor acoustic window was observed in 18 patients. Correct sonographic diagnosis of intracranial haematoma (in comparison to CT scan findings) was made in 126 patients, with a sensitivity and specificity of 94% and 95% respectively. The evaluation of the volume of the haematoma in the acute phase (< 3 hours from onset), when TDS evaluation was possible with a correct acoustic window, has been described to be feasible with good reproducibility (Perez et al. 2009). However, the volume of ischaemic brain injury is not accurately measured using sonography.

An excellent correlation between the application of TDS and CT scanning for the measurement of the size of the third ventricle (r=0.95) and the frontal horn of the lateral ventricle (r=0.92) has been described (Becker G et al. 1994). In this study, TDS was applied to patients with known hydrocephalus from several causes, including subarachnoid haemorrhage, normal pressure hydrocephalus and brain tumours, with the third ventricle larger than 9mm and the frontal horn of the lateral ventricle larger than 19mm on the CT scan. The accurate sonographic measurement of ventricle size has been confirmed by several studies (Seidel et al. 1995; Kiphuth et al. 2011). External ventricular drainage placement has also been shown to be possible using sonography.

Brain midline shift (MLS) is a life-threatening condition that requires urgent diagnosis and treatment (Becker et al. 1977; Vollmer 1991). Seidel et al. described in 1996 a simple method to determine MLS with sonography by measuring the distance between the skull and the third ventricle at both sides in ischaemic stroke patients (Figure 2) (Seidel et al. 1996). Ultrasound MLS correlates well with findings on CT (Stolz et al. 1999; Bertram et al. 2000; Tang et al. 2006; Horstmann et al. 2009), and is an early predictor of outcome in acute stroke patients (Gerriets et al. 1999; 2001). Recently, a good agreement between the use of CT and sonography for MLS assessment in neurocritical care patients was confirmed (Motuel et al. 2014). 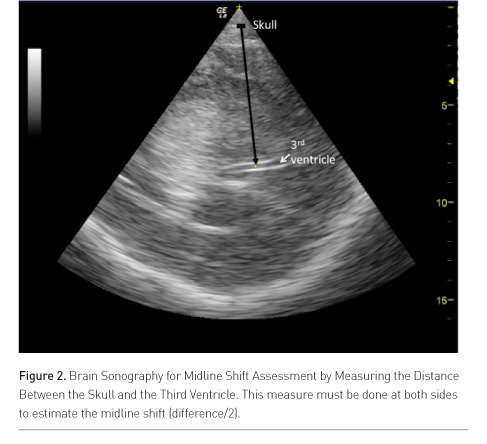 Brain ultrasound is a promising tool for the management of neurocritical patients, enabling the risk of life-threatening conditions to be estimated. As discussed, these include raised ICP, intracranial haematoma, hydrocephalus and midline shift. The main limitation is the relatively important percentage of patients with a poor acoustic window (5-10%). Use of brain ultrasound in the very early management of neurocritical care patients might enable physicians to better estimate the risk for acute neurosurgical emergencies that require urgent treatment such as osmotherapy.

The progress towards, and potential of, personalised/ precision medicine in intensive care is the theme for our cover story.... Read more

Antimicrobial Stewardship in the ICU

Brain, Ultrasound Sonography of the brain allows estimation of the risk posed by life-threatening conditions