Protective Ventilation: When and Why to Individualize

Acute respiratory distress syndrome (ARDS) is a heterogeneous entity. Calfee and colleagues’ analysis of the ARMA and ALVEOLI trials (Calfee et al. 2015) differentiated two ARDS subphenotypes, one of which was categorized by more severe inflammation and worse clinical outcomes. Response to positive end-expiratory pressure (PEEP) was different in the two subphenotypes. High PEEP showed more ventilator-free days and organ failure-free days and increased survival only in the subphenotype characterized by a greater inflammation. ARDS severity also affects the response to treatment. In a meta-analysis on studies of high vs. low PEEP in ARDS, Briel and colleagues showed that higher PEEP reduced the risk of death and shortened the time to unassisted breathing only in moderateto-severe ARDS cases (Briel et al. 2010). In mild ARDS the opposite may be true. So, the same treatment may change the outcome according to the phenotype and to severity. This concept has been incorporated in current recommendations (Ferguson et al. 2012), stating that higher PEEP should be reserved to moderate-to-severe ARDS cases (Figure 1). 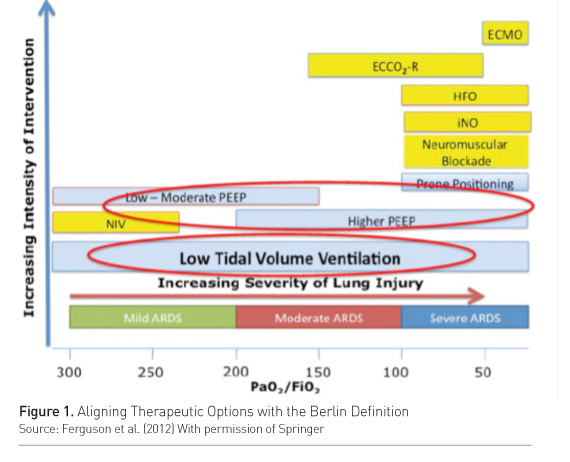 Why and How to Individualize Ventilation

Individualized treatment has the potential to improve patient outcome and reduce side effects of treatment in patients who do not respond, thus allowing better use of resources. Protective ventilation is currently used in ARDS and it is based on the application of low tidal volume (Vt) and moderateto-high PEEP with the aim of avoiding overdistension and optimizing recruitment. Individualising protective ventilation in ARDS means selecting the right tidal volume and the right level of PEEP for each individual patient.

ARDS is a restrictive disease and this is well reflected in the concept of the “baby lung” (the size of the aerated lung still accessible to ventilation is reduced to the size of the lung of a baby). The obvious implication is that the size of the “baby” lung should determine the ventilator settings. Decreasing Vt from 12 ml/kg of predicted body weight (PBW) to 6 ml/kg PBW was shown to improve survival, likely because of the decrease in lung overdistention (Acute Respiratory Distress Syndrome Network 2000). A Vt of 6 ml/kg PBW does not assure that lung overdistension is always avoided in every patient. A smaller “baby” lung can in fact be hyperinflated even using a Vt of 6 ml/kg PBW (Terragni et al. 2007), suggesting that Vt should be better tailored on the size of the baby lung than on the body weight (Gattinoni et al. 2016). Modern ventilators have the technology to measure directly the aerated lung volume thus allowing to normalize tidal volume on the size of the baby lung.

Normalising tidal volume to the compliance of the respiratory system gives the driving pressure (Vt/Crs). The driving pressure (ΔP) can be calculated at the bedside as plateau pressure minus PEEP (Pplat – PEEP), and it can be considered as an estimate of the lung strain. Lung strain is the lung deformation imposed by tidal ventilation, and it is equal to the ratio of tidal volume divided by the functional residual capacity, that is the size of the aerated baby lung at end-expiration.

An analysis of data on 3562 ARDS patients examined the relationship between driving pressure and survival (Amato et al. 2015), and found that driving pressure was the ventilation variable most strongly associated with survival. Their analysis demonstrated that the mortality rate paralleled changes in tidal volume only when it is expressed as a function of compliance, which is an estimation of the baby lung, that is the driving pressure (Vt/Crs). On the contrary, mortality rate was not correlated with tidal volume when it is expressed as a function of body weight (Vt/PBW). This shows clearly that the tidal volume should not be sized on patient’ predicted body weight but on the size of the baby lung.

High PEEP is not recommended for all ARDS patients. Two trials comparing high vs. low PEEP failed to show any advantages of an indiscriminate use of high PEEP in all ARDS patients (Brower et al. 2004; Meade et al. 2008). In fact, it is logical to use higher PEEP only in patients who have some parts of the lungs that can be recruited. Recruitability (lung that can be recruited) is clearly correlated with recruitment (lung that is actually recruited) (Gattinoni et al. 2006), suggesting that PEEP should only be applied when there is a potential for recruitment. Gattinoni showed that patients with highly recruitable lung have more severe and more diffuse injury, i.e., they have a smaller baby lung at low PEEP (Gattinoni et al. 2006).

Caironi and colleagues (2015) further elucidated this concept. These authors differentiated patients according to the amount of cyclic lung opening (during inflation) and closing (during deflation), which is a measure of recruitability (the higher the cyclic opening-closing, the higher the recruitability). They demonstrated that increasing PEEP decreases the cyclic opening and closing (i.e., increases lung recruitment) only in patients with higher recruitability. In addition, the increased recruitment obtained with PEEP in these patients was correlated with an increased survival. Thus, using high PEEP increases recruitment when there is a high potential for recruitment and this may improve outcome. Increasing PEEP has no effect and may even be detrimental in patients with a lower potential for recruitment.

How to Assess Recruitment to Set PEEP at the Bedside

PEEP is used to recruit the lung. Measuring or estimating lung recruitment is therefore important for optimizing the PEEP setting.

A simple way to assess recruitment induced by PEEP is to measure the lung volume. Dellamonica and colleagues (2011) compared a method to estimate alveolar recruitment derived from bedside measurement of end-expiratory lung volume (nitrogen washout/washin technique) with the measurement of recruitment obtained on the pressure volume curves (standard technique). Estimated recruitment with increasing PEEP was expressed by: ΔPEEP (ΔEELV x Crs at low PEEP). They showed that the two methods yielded similar results, thus demonstrating that the nitrogen washout/washin technique can be used for bedside assessment of PEEP-induced recruitment.

Changes in oxygenation can be used to estimate recruitment. Maggiore and coworkers reported that a significant correlation exists between recruitment and oxygenation (Maggiore et al. 2001). This correlation, however, is too weak to allow, in an individual patient, to assess PEEP-induced recruitment by its effect on oxygenation.

It is possible to use compliance to individualize the PEEP setting according to recruitability. Let’s imagine to ventilate an ARDS patient with a Vt 6mL/kg PBW and to keep the plateau pressure at the safe limit of 28-30 cmH2O. If the compliance at low PEEP (e.g., 5 cm H2O) is high, the pressure oscillation due to tidal ventilation (i.e., the driving pressure) will be small. So the maximum PEEP that can be applied to reach a plateau pressure of 28-30 cm H2O will be high. The opposite will occur if the compliance at low PEEP is low. In this case, tidal volume will produce a higher driving pressure, so that the maximum PEEP that you can use to reach the target plateau pressure is low, because much of the pressure is already taken by the driving pressure. This is a way to individualize the PEEP setting in order to maximize recruitment in a safe way and it was used in the EXPRESS trial.

The EXPRESS trial compared a moderate PEEP strategy (5-9 cm H2O), to minimize overdistension, to a PEEP setting to safely maximize recruitment, as described above. In this study, there was no difference in mortality, but there were more patients breathing without ventilator assistance when PEEP was individually set to maximize recruitment. In more severe patients, there was a clear trend to a lower mortality and a significantly higher number of patients breathing without ventilator assistance when PEEP was set to maximize recruitment. On the contrary, higher PEEP had no effect in patients with mild ARDS (Mercat et al. 2008). We also need to consider cases where mechanical ventilation fails, i.e., patients with a too small baby lung to allow for a safe conventional mechanical ventilation. In these patients, Terragni and colleagues (2009) showed that use of extracorporeal carbon dioxide removal (ECCO2R) allowed to provide ultraprotective ventilation with a reduction of tidal volume below 6 ml/kg PBW (up to 4 ml/kg).

The future of mechanical ventilation in ARDS is an individualized approach. First of all, intensivists need to become better at recognising ARDS. As shown by the LUNG-SAFE study (Bellani et al. 2016), ARDS is in fact still underrecognised, undertreated and, probably for these reasons, still associated with high mortality. We should also understand that ARDS is a heterogeneous syndrome, comprised of distinct phenotypes, different severity and different response to treatments. We need to recognise this and to adapt mechanical ventilation to individual patient conditions, particularly when there is a clear failure of the standard lung protective ventilation strategy. This means knowing the size of the lung that should be ventilated, to select the optimal tidal volume, and knowing if the lung is recruitable and how much can be recruited, to optimize the level of PEEP. Modern technology allows us to have this information at the bedside.

Quality in Practice: Towards a Patient-Centred View

Professor Guidet has been a university medical professor since 1997. He is a member of the research unit INSERM U1136 at the... Read more

Brexit's Brutal Blow to the NHS

“I’m sorry. I’m just so sorry.” It’s 8am. Two junior doctors, one English, the other Italian, embrace in tears on the steps... Read more