A study of over 1 million ICU patients has found that just 5 percent of patients account for 33 percent of ICU bed days. The researchers, led by Theodore Iwashyna, MD, Associate Professor of Internal Medicine at the University of Michigan (U-M) Health System and a member of the VA Center for Clinical Management Research and the U-M Institute for Healthcare Policy and Innovation, have identified these patients as having the condition of persistent critical illness (PerCI) (Iwashyna et al. 2016). The research team based their work on data from patients treated in 182 ICUs across Australia and New Zealand between 2000 and 2014.

Of the million patients 51,509 were found to have PerCI. PerCI patients spent more than a million days in ICU beds, and more than 2.2 million days in the hospital overall. Nearly onequarter of the patients with PerCI died in the ICU. Just under half were able to go directly home from the hospital - compared with threequarters of non-PerCI ICU patients.

The researchers looked at the patients’ hospital records to see how well each patient’s eventual outcome could be predicted. They found that after about 10 days in the ICU, the usual clinically-based prediction tools lost their power to predict risk of death. Who the patient was before he or she came to the hospital mattered more to their chance of dying. This point signals transition to PerCI, say the researchers.

Dr. Iwashyna confirmed that PerCI is a separate state that patients transition into: “you're there because you're there, stuck in this cascade that we can't get you out of," he said. He added: "The reason why these patients came in to the hospital in the first place doesn't matter nearly as much anymore - what matters is that they've been there, and some aspects of how well their body worked before they came in, such as age. These [patients] are the ones where no matter how hard we try, we can't get them balanced.”

Carol Hodgson, PhD, a Monash University ICU physiotherapist and second author, explained that PerCI focuses on different characteristics of patients than other efforts used to describe long-stay patients, such as ‘failure-to-wean’. "That label focuses the care team on the particular details of respiratory mechanics," she said. "Our clinical experience and our data suggest instead that the problem may be that PerCI patients may never even reach the point where ICU doctors are able to try to get them off a ventilator - they just keep cascading from new problem to new problem. These patients need particular strategies that may prevent or reduce PerCI within the ICU, and additional resources to facilitate safe discharge from the ICU and hospital, with only 50% able to be discharged home." Senior author Professor Rinaldo Bellomo commented that better understanding of PerCI could assist ICU teams in discussing prospects for patients who have been in the ICU a long time. "We need to help the fraction who are inevitably going to die do so with dignity, and at the same time help those who are not fated to die to get better treatment," he said. 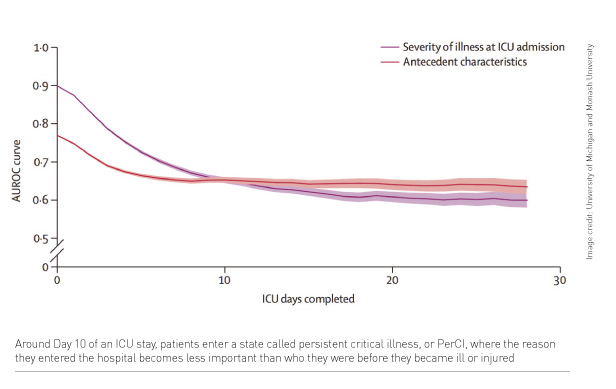 The enteral route is commonly accepted as the first choice for providing ‏nutrition to patients in the ICU with stable haemodynamics... Read more

This symposium explored controversial aspects of the nutritional management of patients in the ICU. There are new concepts... Read more

critically ill, persistent critical illness, PerCI A study of over 1 million ICU patients has found that just 5 percent of patients account for 33 percent of ICU bed days. And the researchers, led by Theodore Iwashyna, MD, Associate Professor of Internal medicine at the University of Michigan (U-M) Health