Share
Download Article Back
Organ cross-talk is a popular mechanism invoked to explain the progression of multi-organ dysfunction syndrome; however this term is often ill-defined and may encompass many differing mechanisms of organ interaction. In this article the concept of cross-talk is reviewed and its real meaning to the clinical is critically appraised.
Multi-organ failure, better termed multi-organ dysfunction syndrome (MODS)— reflecting a graduation in severity of organ injuries, is one of the defining features of critical illness. MODS is a frequent consequence of presentation with circulatory or septic shock, or as a serious complication of organ hypoperfusion and systemic inflammatory responses during major surgery. Even when the reason for ICU admission is only to support a single organ system there is invariably potential for dysfunction of other organ systems, either directly, due to the primary disease, or indirectly from the distant effects of the primary organ failure or of organ support therapies such as sedation or invasive mechanical ventilation. Managing the conflicting demands of multi-organ support is the bread and butter of modern critical care and intensivists are very familiar with the concept of escalating increase in risk of death with the presence or acquisition of additional ‘organ failures’ (Ferreira et al. 2001).
There has been a longstanding appreciation of the importance of providing effective early treatment of primary conditions while avoiding secondary injury to prevent a spiral toward progressive organ dysfunction and death. More recently, there has been an interest in the bi-directional impact of organ dysfunction and its treatment on the function of other organ systems, a process termed “organ cross-talk.” Behind this concept lie two important observations: firstly that organ injuries may potentiate, resulting in a far greater burden of illness than if the effects of dysfunction of different organs were merely added, and, secondly, that there may be specific pathophysiological pathways of organ cross-talk that could be targets for specific intervention. However, while “organ cross-talk” is becoming a widely used term, it is often employed with little detailed understanding. It could mean many things in differing circumstances. Clearly, ‘cross-talk’ between organs is part of the normal physiology of a large multicellular organism, with physiological mechanisms responsible for maintenance of whole organism homeostasis. Examples of such mechanisms include neurological and endocrine signalling between organs and the direct effects of physiological parameters such as blood pressure or arterial oxygen content on the function of distant organs.
It is the breakdown of such homeostatic mechanisms that is another defining feature of critical illness. Furthermore, coordinated responses to inflammation across many organ systems are part of the physiological responses to injury, but represent a form of communication between biological systems. While it is pathological forms of cross-talk, where responses in one organ are deleterious to the function of another that have been the focus of most interest, we should not forget that loss of normal physiological cross-talk between organs may play an equally important role in the progression of multiple organ dysfunction.
For the bedside clinician what then distinguishes pathological organ cross-talk from MODS in general? Pathological organ cross-talk is one mechanism by which MODS can arise or progress. MODS can arise in parallel with a systemic insult such as septic or haemorrhagic shock affecting many organs simultaneously. In this case such mechanisms affect supply/demand imbalance of organ perfusion and the inflammatory response to circulation damage or pathogen-associated molecular patterns are ‘talking’ to multiple organs simultaneously (Figure 1a). Conversely in cases where organ dysfunction arises in series as the effect of severe injury to one organ goes on to cause dysfunction in a number of other organ systems in a form of predominantly unidirectional cross-talk, an example is the systemic effects of cardiogenic shock (Figure 1b). 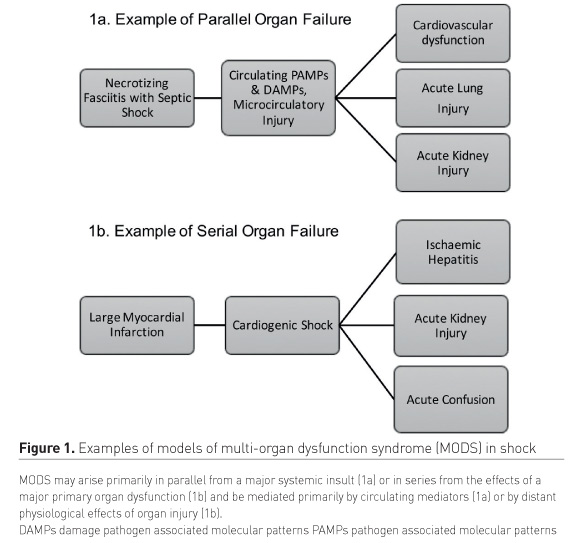 However, irrespective of whether MODS arises in series or parallel, bidirectional effects of organ injuries and dysfunction on other organ systems is a key aspect of the progression of MODS, eventually culminating in refractory shock and death (Figure 2). 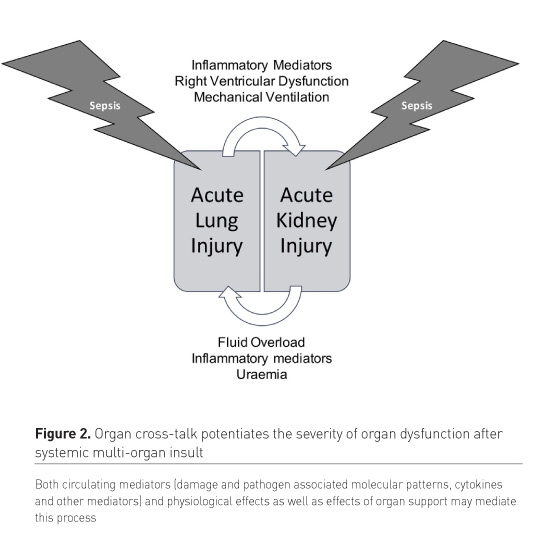 In addition to acute organ dysfunction chronic organ disease may play an important modifying role in the development of MODS, in critical illness (Figure 3), firstly by increasing risk of developing organ failure in response to distant injury, both in decompensation of the chronically diseased organ (i.e. decompensation of chronic liver disease in sepsis) and in acquisition of acute injury in other organs (i.e. predisposition to acute kidney injury in the context of chronic liver or cardiac disease). Finally, we cannot neglect the effects of treatment for organ dysfunction on other organ systems: interventions such as mechanical ventilation, sedation, renal replacement therapy and extracorporeal membrane oxygenation may be necessary for the treatment of one organ system, but have unintended deleterious effects elsewhere, while the presence of other organ dysfunctions can complicate the application and use of such methods of organ support, a process of so-called artificial organ cross-talk (Husain-Syed et al. 2018). Of course, in most cases of critical illness many or all of the above mechanisms co-exist, so that MODS typically arises in part in series and in part in parallel on a background of some chronic co-morbid disease, potentiated by bidirectional effects of organ injuries and modified by the positive and negative effects of organ support therapies. 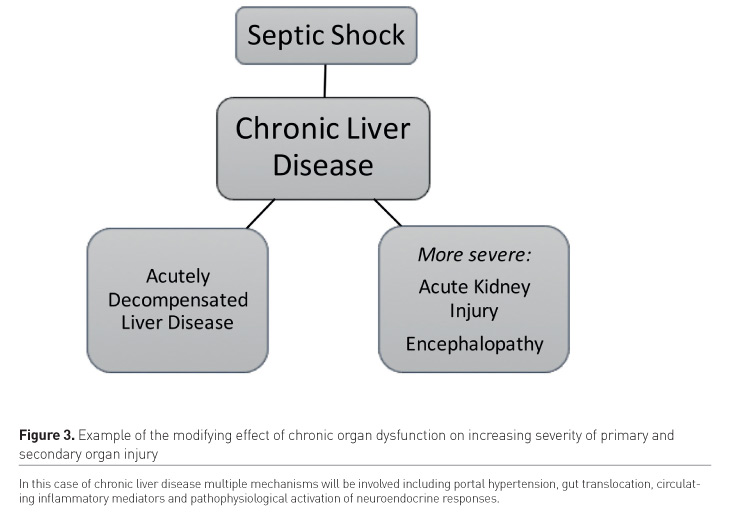 Given the diversity of pathological organ cross-talk it’s not surprising that multiple mechanisms have been invoked to explain it. Broadly these could be considered as the distant effects of inflammatory mediators released into the circulation and the distant effects of the disordered physiology of one organ on others, mediated either directly (i.e. hypoperfusion in cardiac failure) or indirectly, via pathophysiological neuro/endocrine effects. Concepts of cross-talk in MODS first gained a high level of interest in the setting of lung injury, where the generation of circulating inflammatory mediators from the large surface area of injured pulmonary epithelium was described as causing multi-organ dysfunction in distant organs, such as the kidney, cardiovascular system and gastrointestinal tract mediating the high mortality associated with adult respiratory distress syndromes (Imai et al. 2003). Importantly, in this context mediators might arise both as a consequence of the primary lung injury or secondary to effects of mechanical ventilation necessary to treat the primary respiratory failure (Husain-Syed et al. 2016). Similarly, isolated acute kidney injury caused by ischaemia reperfusion has been shown to mediate an inflammatory response that can result in secondary lung injury (Klein et al. 2008; Rabb et al. 2009), potentially setting up a vicious cycle of organ injury (Figure 2). In addition to the lung and the kidney the gastrointestinal tract may play a key role in the development of MODS, primary or secondary gastrointestinal injury from ischaemia, venous congestion or inflammation, as well as chronic effects of portal hypertension or uraemia, and may predispose to bacterial translocation and the systemic release of potent pathogen associated molecular patterns (Ko et al. 2009). In contrast, more physiological mechanisms of pathological organ cross-talk have been best described in the various forms of cardio-renal syndromes (Ronco et al. 2008), which reflect the effects of acute or chronic effects of cardiac dysfunction on the kidney and vice versa. These embrace forward and backward effects of cardiac dysfunction on the renal circulation, neuroendocrine abnormalities in acute and chronic cardiac and renal failure and, in particular, the deleterious effects of fluid overload on both organ systems. Inflammatory mechanisms also play a role in renal-cardiac interactions, for instance the pro-inflammatory milieu of chronic kidney disease. More recently, the cardio-renal model has been extended to reflect the interdependence of the heart, lungs and kidneys in cardio-renal-pulmonary syndromes (Husain-Syed et al. 2015). However, while these syndromes are very useful constructs for classifying mechanisms of illness, it remains questionable if forcing individual patients with complex and evolving illness into complex categorisations of acute and chronic multi-organ syndromes is useful to the treatment of the individual at the bedside.
An alternative to the development of complex classification of constellations of organ dysfunctions has been a focus on the role of individual organs as orchestrators of cross-talk. In the literature the kidney has been best described in this role due to its function in regulating fluid status, electrolytes and acid base and as a clearing house for many circulating low molecular weight inflammatory mediators, or conversely as a rich source of such mediators in injury (Doi and Rabb 2016; Grams and Rabb 2012). Furthermore the distant organ effects of chronic kidney disease are well recognised as leading to multi-system chronic disease. However, in the right context almost any organ system plays a central role in the development of MODS and, to some extent, the emphasis on a single organ is against the concept of organ cross-talk as a term encompassing the inter-dependent effects of many organs injuries.
How then does the clinician get through the diverse and complex process that comes under the umbrella of organ cross-talk to develop insights that are useful at the bedside? Firstly, active intervention to alter the course of established MODS with multiple mechanisms of cross-talk is likely to be very difficult due to the diversity of pathways driving this process and the potential for intervention directed at any organ to adversely affect others. Early recognition of the deteriorating patient, particularly in the context of established chronic organ disease is essential to preventing secondary organ injury and progressive organ dysfunction. Secondly, while multiple interdependent mechanisms of organ cross-talk are difficult to dissect there may be some key mediators of organ interaction that could be amenable to intervention or prevention, such as the systemic effects of fluid overload. Rather than trying to classify primary and secondary organ dysfunctions it may be better to identify the presence of unifying mechanisms of cross-talk that could be targeted for intervention. Finally we must not neglect the adverse effects of our therapies. If any lessons can be drawn from the last 30 years of critical care research, it is that targeting a specific physiological parameter in a single organ system is rarely beneficial, and more often harmful, and that in the treatment of the critically ill most often “less is more.” As mechanisms of organ dysfunction in critical illness are complex and we are unlikely to fully understand any patient’s illness at a given moment in time, we should resist the temptation to invoke rigid classifications of illness, but instead serially evaluate the clinical condition and response to treatment, seeking opportunities to assess the effects of interventions that may break cycles of organ dysfunction. The nature of such interventions will be crucially dependent on the clinical context. For instance, at one stage of illness appropriate fluid management could constitute resuscitation and, at another, fluid removal. Similar considerations of timing and context are likely to apply to anti- and pro-inflammatory interventions targeting humoral mechanisms of cross-talk. While targeted intervention to lessen pathological organ cross-talk holds great promise, in practice it is likely to be very challenging and will require careful patient characterisation.

(I expert, I question, I answer)  Have you got something to say? Visit  https://healthmanagement.org/c/icu/list/blog  or... Read more

The sepsis box, bag and trolley

Evaluation of aids to the delivery of sepsis treatment. In NHS Wales the Sepsis 6 bundle, delivered within one hour... Read more