Safe and reliable venous access is the foundation for medication administration in critical and intensive care unit (ICU) patients. Several important issues surround vascular access in the ICU setting, including the need for multiple multi-lumen devices for delivery of concomitant drugs and the frequent sampling of blood from catheters. Risk factors associated with catheter-related complications in ICU patients are coma/immobility and the number of catheters present (Villamarín-Bello et al. 2016). The risk of complications associated with central venous catheters is higher in ICUs compared to other departments, with 35% greater prevalence in one prospective study evaluating peripherally inserted central catheters (Leroyer et al. 2013). Balancing the needs of clinically unstable patients with risks associated with numerous vascular devices requires a process for device selection, aseptic insertion, management and removal of devices when no longer necessary.

Central venous access devices commonly used in ICUs pose significant infectious and thrombotic risk to patients (Maki et al. 2006). Potential risk factors identified as contributing to the development of infectious and thrombotic complications are the patient’s underlying disease, type of catheter, immobility, sedation and duration of catheter use (Richet et al. 1990). The concern for thrombosis includes lower extremities for immobile patients, but also heightened concern for upper extremity thrombosis from central venous access devices (CVAD) (Kearon et al. 2012; Clemence and Maneval 2014). Central devices inserted in the arm, such as peripherally inserted central catheters (PICCs), have a higher risk of thrombosis, with incidence in the literature ranging from 2-75% (Chopra et al. 2013a; Clemence and Maneval 2014; Fallouh et al. 2015). Increasing use of PICCs in intensive care has similarly led to greater levels of thrombosis in this patient population (Chopra et al. 2013a). The association between thrombosis, infections and central catheters highlights why use of devices such as PICCs should be considered only when indicated (Evans et al. 2010; Chopra et al. 2012a; Chopra et al. 2013a; Chopra et al. 2013b; Malinoski et al. 2013; Moureau 2013a; Marschall et al. 2014).

Guidance for selection with evidence-based indications for PICCs or other chest-inserted central catheters (CICC) has been lacking despite recommendations for hospitals to establish tighter criteria. The Society of Healthcare Epidemiology of America (SHEA) recommends providing clinicians with easy access to an evidence-based list of indications for CVC, prior to placement, to minimise unnecessary central catheters and limit risk of central line-associated bloodstream infections (CLABSI) (Marschall et al. 2014). In an effort to address the issues and potentially reduce vascular access device risk to patients, a multidisciplinary panel of national and international experts was convened to examine criteria for appropriate placement of peripherally inserted central catheters (PICCs) in comparison with other peripheral and central venous devices (Chopra et al. 2015). The Michigan Appropriateness Guide for Intravenous Catheters (MAGIC): Results from a Multispecialty Panel Using the RAND/UCLA Appropriateness Method reflects the in-depth evaluation of vascular access devices to provide the evidence needed to guide selection (Chopra, Flanders et al. 2015).

MAGIC was formulated using the RAND Corporation/University of California Los Angeles (RAND/UCLA) Appropriateness Method (Fitch et al. 2001). Following systematic reviews of the literature and compilation of available evidence, clinical scenarios were created to rate the appropriateness of insertion, maintenance and care of PICCs in comparison with other peripheral and central venous access devices. Using a conceptual framework of categories such as duration of use, type of infusate, patient, device and provider factors, scenarios were developed for ratings. In accordance with the RAND/UCLA method, the purpose of the panel was not to reach consensus, but rather evaluate why disagreement occurred in order to minimise misunderstandings when rating each  scenario. A multi-specialty group of experts was selected to review the literature and rate the appropriateness of each of the scenarios for each of the devices including peripherally inserted central catheters (PICCs), ultrasonography-guided peripheral intravenous catheters, midline catheters, and peripheral intravenous catheters, non-tunnelled CVCs, tunnelled CVCs and ports.

A summary of appropriate and inappropriate vascular access applications follows and is condensed in Table 1 Vascular Access Dashboard. For more detailed information on the results of MAGIC refer to the complete publication (Chopra et al. 2015). 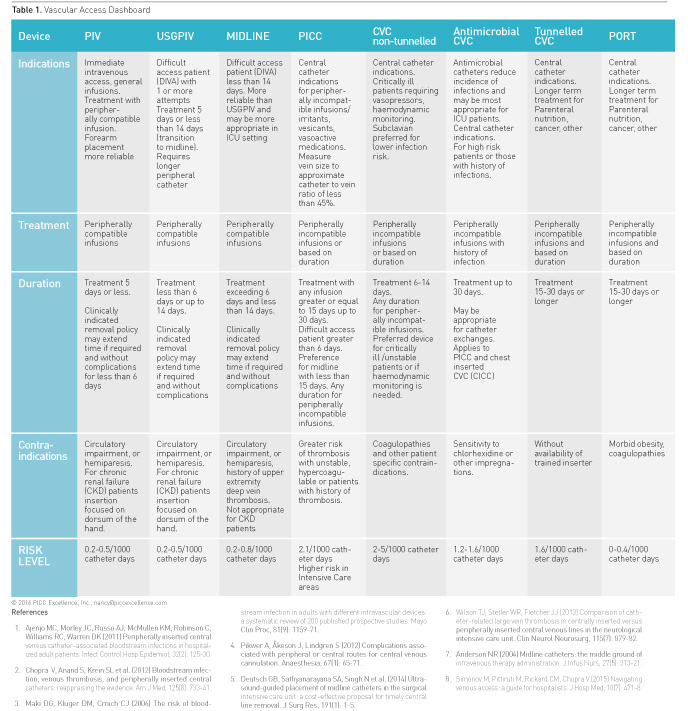 Peripherally inserted central catheters (PICCs) are currently used in all care settings with a reported volume of 2.9 million per year used in the USA market alone (iData Research 2014). Specific indications for PICCs in intensive care areas include administration of vasopressors, delivery of peripherally incompatible infusions, parenteral nutrition, frequent blood sampling of three times a day or more, need for invasive haemodynamic monitoring, or patients who may require infusions greater than 15 days (Table 1 Vascular Access Dashboard). Importantly several studies (including a recent randomised trial and a meta-analysis of 64 studies) suggest that the risk of upperextremity thrombosis is higher for PICCs in critically ill patients (Chopra et al. 2013a). For this reason, non-tunnelled CVCs are rated as appropriate for use in ICU settings over PICCs when such use is proposed to last <14 days. In patients with chronic kidney disease (CKD) (glomerular filtration rate of less than 45 mL/min, creatinine level greater than 3.0, those on dialysis or with stage 3b CKD or greater) peripheral access with PICCs is considered inappropriate and should be preceded by nephrology consultation (Hoggard et al. 2008; Drew and Weiner 2016). In patients with difficult access and no central infusion indications, MAGIC recommendations list a preference for ultrasound-guided peripheral catheters or midline devices rather than PICCs.

While ultrasound can be used to place any intravenous catheter, we use the term USGPIVs to refer to the ultrasound needle-guided placement of catheters of greater length (4-6cm), owing to the greater depth needed for access (Keyes et al. 1999). USGPIV are appropriate for difficult access patients requiring treatment for 6 or fewer days or up to 14 days with peripherally compatible infusions. Midline catheters provide even greater catheter length for longer dwell. Midline catheters range from 8-20cm in length with the terminal tip in the basilic, brachial or cephalic veins. Notably midlines should not extend into the axillary vein or enter the chest (Gorski et al. 2016). Indications for midline catheters mirror USGPIV for indications of treatment up to 14 days. Additionally midlines may be a more reliable peripheral catheter for intensive care patients, owing to their longer dwell time and more stable upper arm placement (Anderson 2004; Mills et al. 2007; Garcia 2009; Alexandrou et al. 2011; Morrison 2012; Warrington et al. 2012; Baliad and Peterson 2013; Dawson and Moureau 2013). A policy ensuring that peripheral catheters are removed when clinically indicated rather than on a routine basis is also recommended by MAGIC. (Rickard et al. 2012; Webster et al. 2013; Tuffaha et al. 2014).

MAGIC examined the appropriateness of nontunnelled chest inserted central catheters, tunnelled catheters, as well as subcutaneously implanted ports in comparison with PICCs. Based on treatment, the peripheral compatibility of the infusate, proposed duration of infusion and other factors dictating the need for central administration, the use of nontunnelled acute care catheters for 6-14 days was considered appropriate. Non-tunnelled catheters are preferred over PICCs when risk factors for thrombosis are present or when there is a history of deep vein thrombosis (Chakravarthy et al. 2005; Evans et al. 2010; Chopra et al. 2013a). Preference was given for  non-tunnelled CVADs for patients who were haemodynamically unstable, actively receiving vasopressors or requiring urgent central venous access (Chopra et al. 2015). Tunnelled catheters were indicated when at least 3 months of treatment were needed. Ports were considered appropriate for treatment that required intravenous access for 6 months or more and neutral for treatment of 3-6 months.

Maintaining vascular access is a top priority in the intensive care patient population. The selection of vascular access devices for critically ill patients requires the clinician to consider many factors that impact patient risk and safety. With prolonged immobility and critical illness, the risk of thrombosis and infection must be factored into the equation when selecting a device. Selection criteria established within the MAGIC guide can help determine which device is associated with least risk and meets treatment needs of the patient (Anderson and Spencer 2003; Maki et al. 2006; Crowley et al. 2008; Chopra et al. 2012b; Clemence and Maneval 2014; Chopra et al. 2015). MAGIC provides guidance and measurement criteria through which to assess the appropriateness of PICCs and other vascular access devices for the intensive care patient (Chopra et al. 2015; Woller et al. 2015). Application of MAGIC by clinicians and providers within intensive care areas may assist hospitals in establishing reliable access, improving outcomes, achieving infection prevention goals and reducing burden of thrombosis.

Alexandrou E, Ramjan LM , Spencer T et al. (2011) The use of midline catheters in the adult acute care setting – clinical implications and recommendations for practice. The Journal of the Association for Vascular Access, 16(1): 35-8, 40-1. Article ↗

This review will briefly discuss the potential role of nutrition and the  schedule of delivery on reducing skeletal muscle wasting... Read more

So You Think You Got Microchipped? Prove It!

People around the world are getting the COVID-19 vaccine. There are... Read more

An Epiphany from Inside the COVID-19 Crisis in the UK

The Lockdown May End, But Nursing Will Continue My dear readers it is... Read more

I am delighted to be taking over the editorial helm at HealthManagement.org... Read more

More space in patients' rooms - that is a strong desire in many hospitals.... Read more

The intensive care unit is one of the most challenging areas in the... Read more

Researchers Found That Use of Patient SafetyNet with Masimo SET® Pulse... Read more