Intracranial pressure (ICP) monitoring is the cornerstone for treatment and management of patients, especially following traumatic brain injury (TBI) but also other clinical conditions such as non-traumatic bleeds, hydrocephalus, space-occupying lesions and cerebral oedema. The key target to monitor and treat ICP is to optimise the cerebral perfusion pressure (CPP). CPP is obtained by calculating the difference between the mean arterial blood pressure (MAP) and the ICP [CPP= MAP-ICP].

There is an association between increased ICP and increased mortality in patients following TBI. This can be due to a decrease in CPP which leads to cerebral ischemia or due to herniation of brainstem secondary to expanding volume in the brain. The latter phenomenon was described in the late 18th century, known as the Monroe-Kellie hypothesis.

There are various goal-directed therapies to control the raised ICP and maintain an optimal MAP; therefore it is essential to have a monitoring system, which should help guide these interventions. Currently, there are no universally accepted guidelines and hospitals have developed local policies to monitor ICP (Raboel et al 2012). The following section looks at various devices available to monitor ICP.

The current recommended gold standard technique to measure ICP is invasive. However, it is important to visit other modalities, which can be broadly classified into noninvasive and invasive methods.

In a recent review (Zhang et al. 2017) noninvasive ICP monitoring was divided into five categories (Table 1). This section will review some key noninvasive techniques which are established and can be used in the emergency and acute settings. 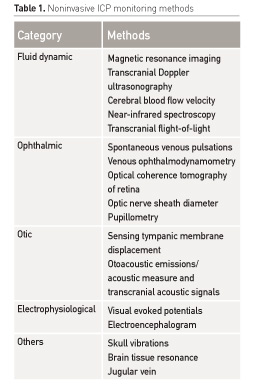 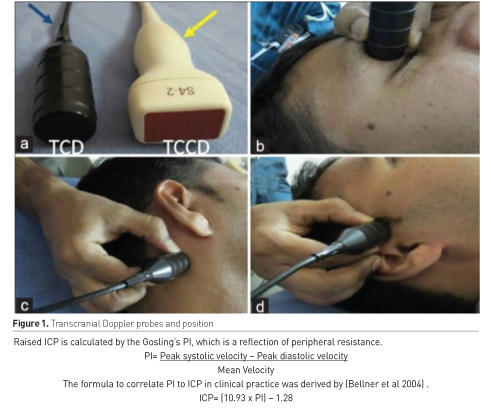 This is Doppler sonography and when combined with tissue imaging it is called duplex sonography. The four common acoustic windows in the adult skull are the temporal, orbital, suboccipital and submandibular (Bathala et al. 2013). The views help to determine flow velocities of vessels involved in cerebral circulation (Table 2). 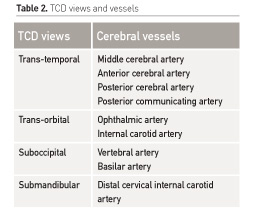 The TCD most commonly is measured at the middle cerebral artery (MCA). The Doppler calculates the pulsatality index (PI) in cerebral vessels which then is put in a formula to give calculated ICP. There are several indications to perform TCD. In a recent review (Lau et al 2017) four key areas were reviewed:

There are currently several limitations to measure ICP using TCD; some of them are mentioned below (Lau et al 2017).

The optic nerve is surrounded by dura mater; any rise in ICP leads to increase in size of the ONSD. This can be measured by performing an ocular sonography. A high frequency linear ultrasound probe is placed on the closed upper eyelid, 3mm behind the globe at an axis perpendicular to the optic nerve. The measurements are made in sagittal and transverse plane and then averaged (Figure 2). ONSD varies with gender but is not influenced by age, weight and height. The mean ONSD measurement for men was 3.78mm compared to 3.60mm in women (Sinha et al. 2017). The ONSD expansion can be compared to papilloedema, but unlike papilloedema, ONSD expansion occurs within seconds of an acute rise of ICP (Sinha et al 2017). 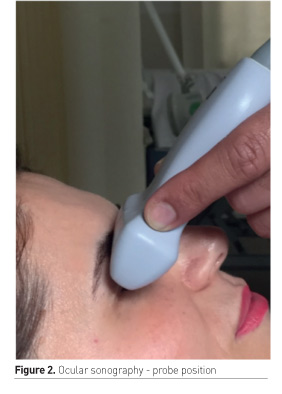 The systematic review by Sinha et al. (2017) looked at various aspects of ONSD which can help determine ICP and its diagnostic utility in patient following cardiac arrest (CA).


ONSD measurements based on ocular sonography is an accurate, noninvasive technique for detection of ICP performed by an experienced operator, but internal institutional validation of optimal ONSD for ICP detection may be required (Rajajee et al 2011).

This is more useful to measure cerebral function and cerebral perfusion. Quantitative pupillometers use infrared light to measure pupillary size, amplitude and velocity. The pupillary light response (PLR) leads to pupillary constriction, but a noxious stimulus may elicit a pupillary reflex dilatation (PRD). An analysis can be performed by using variables such as latency of onset, maximum amplitude, reflex duration, and constriction and dilatation velocities.

The PLR is affected by diminished CBF and therefore useful to measure the CBF. It can be used during CPR or even in the post resuscitation phase, as the vaso-active drugs may affect the pupillary size but the PLR is under the influence of the Edingar-Westphal nucleus which is supplied by the posterior cerebral circulation (Sinha et al. 2017).

Invasive measurement of ICP is the current recommended standard. This can be measured by inserting a catheter into the various anatomical locations of the brain which are determined by the technique: intraventricular, intraparenchymal, subdural, epidural and subarachnoid. The first two techniques are widely used and recommended. ICP can also be measured by lumbar puncture for patients with communicating CSF pathways (Zhang et al. 2017). The Brain Trauma Foundation in their latest updated edition looked at the influence of ICP monitoring on patients' outcome following traumatic brain injury (TBI). It gives a Level II recommendation to use ICP monitoring for management of patients with severe TBI to reduce in-hospital and 2-week post-injury mortality. It also highlighted variability in ICP monitoring approaches between high and low-income countries, which may involve clinical assessment only (Brain Trauma Foundation 2016).

The standard technique is an invasive procedure that involves catheter insertion into the intracranial compartment through a burr hole. Depending on the position and type of catheter inserted its functionality changes. An extra-ventricular device (EVD) compared to the intraparenchymal device has a higher rate of infection, bleeding or malfunction, obstruction and malposition. Table 3 lists various methods of invasive ICP monitoring (Zhang et al. 2017). 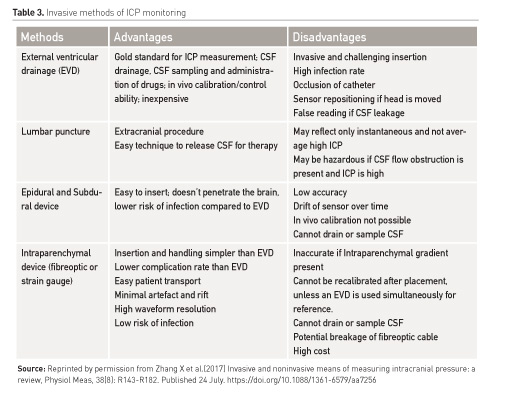 There has been a non-commercialised attempt to create a system which has long term usability, sensors which do not have wires exiting out of the body and have wireless communication to outside with a limited drift potential. These microelectromechanical types of devices can help measure the ICP. The telemetric way is invasive with the risk limited to implantation of the probe only. It can be left in for several months and can monitor ICP under normal daily living conditions in outpatient settings. However, this technology is not yet reliable and cannot be implemented in clinical practice.

ICP monitoring is a very important clinical tool in clinical practice to determine brain function. It has been established from several studies that continuous ICP monitoring following severe brain injury can help dictate the management and positively influence the final outcome of the patients. There is lack of universal guidance and significant variability in practice around use of ICP monitors and brain pressure monitoring. The current recommended invasive techniques are associated with significant complications; however, noninvasive techniques are available but not widely used. The current situation does highlight a need for integrating ICP monitoring into a multimodal and individualised approach to clinical care. Future ICP monitoring should be, ideally, noninvasive or at least less invasive with minimal complications, able to give continuous readings and to be used in outpatient settings.

The Alphabet Book of Sepsis

In this article, the author provides the alphabet review of sepsis and septic shock based on personal clinical experience and... Read more

Their inability to communicate effectively whilst he had a tracheostomy on the intensive care unit (ICU), had such a profound... Read more

(2020-01-25 10:39)
HOW I GOT MY EX HUSBAND BACK WITH THE HELP OF REAL AND EFFECTIVE SPELL FROM DR Osasu My name is Olivia Jayden, I never thought I will smile again, My husband left me with two kids for one year, All effort to bring him back failed I thought I'm not going to see him again not until I met a lady called Jesse who told me about a spell caster called Dr. Osasu , She gave me his email address and mobile number and I contacted him and he assured me that within 48hours my husband will come back to me, In less than 48hours my husband came back started begging for forgiveness saying it is the devils work, so I'm still surprise till now about this miracle,i couldn't conceive but as soon as the spell was cast,i became pregnant and gave birth to my third child,if you need any assistance from him you can contact him via:email: [email protected] Or WhatsApp or call him now:
+2347064365391 . Dr.Osasu also cures: 1. HIV / AIDS 2. HERPES 1/2 3. CANCER 4. ALS (Lou Gehrig’s disease) 5. Hepatitis B