Medicine in mainland China has progressed rapidly during the past 20 years along with rapid economic development. Although the number of ICU beds, doctors and nurses has increased, postgraduate professional education is still lacking. This article gives an overview of the history and current state of intensive care in China.

Critical care was recognised as a medical speciality in China less than 10 years ago. However, the development of intensive care began in the 1980s when the first intensive care unit (ICU) with a single bed was opened in 1982 at Peking Union Medical College Hospital, which opened the first department of critical care medicine in 1984 with a seven-bed ICU, chaired by Professor Dechang Chen, who is recognised as the father of critical care in China (Qiu et al. 2001; Wang and Ma 2006). Figure 1 is a timeline of the main developments. 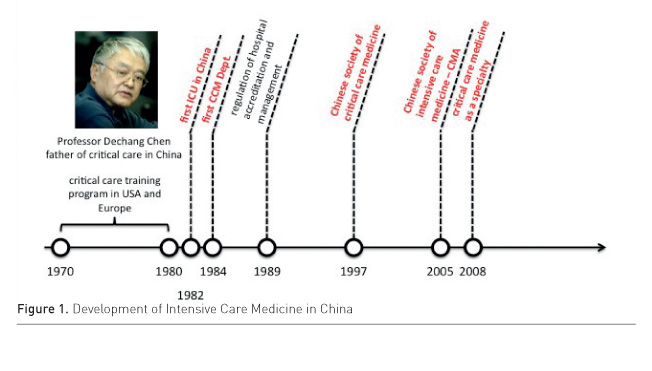 A 1989 Ministry of Health regulation that made it mandatory for hospitals to have an ICU in order to be accredited as a tertiary hospital led to rapid growth (Qiu et al. 2001; Wang and Ma 2006). Currently there is no census information on the number of intensive care beds in China. An estimate from 2010 put the number of beds as approximately 51,891 or 1.8% of hospital beds, corresponding to 3.91 ICU beds per 100,000 population (Du et al. 2010). The estimated number of ICU physicians is between 33,210 and 49,815 and ICU nurses between 71,091 and 104,820 (Du et al. 2010). Hospital and ICU provision varies greatly across the country. Figures 2-4 and Table 1 show hospital bed and healthcare staff provision in Beijing and across China compared to other countries. 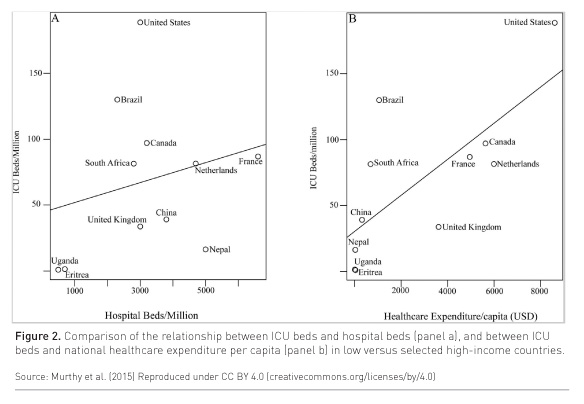 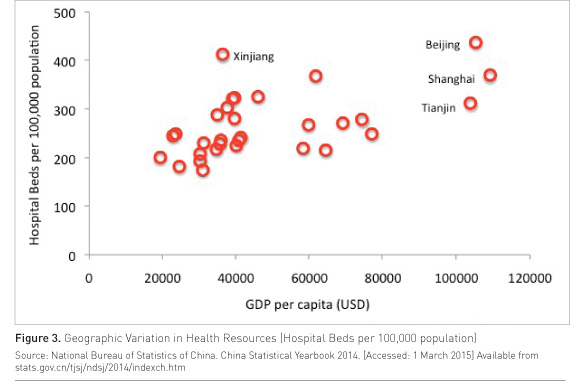 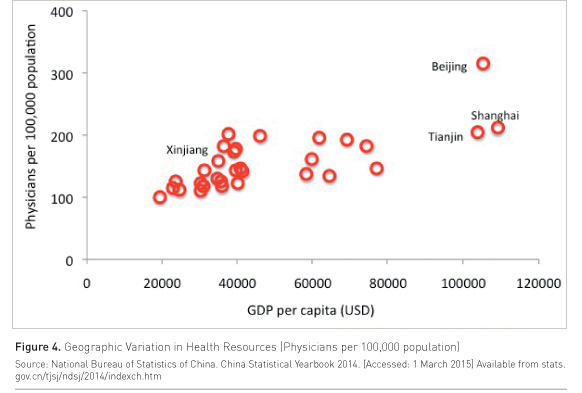 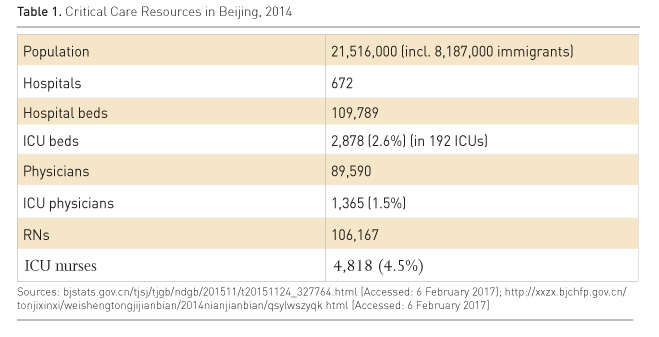 There are now three professional societies for critical care, which collaborate closely. The Chinese Society of Critical Care Medicine (CSCCM) was established in 1997, and has roughly 700 members. It promotes critical care medicine, and liaises with government bodies, and with international critical care societies, including the World Federation of Societies of Intensive and Critical Care Medicine, the Asia Pacific Association of Critical Medicine and the Global Sepsis Alliance. It organises a national conference every year. The last conference in 2016 was attended by more than 3000 delegates. The Chinese Society of Intensive Care Medicine was established under the umbrella of the Chinese Medical Association in 2005. The CSICM has developed clinical practice guidelines on sepsis management, mechanical ventilation and nutritional support. The professional certification of intensivists is undertaken by the Chinese Association of Critical Care Physicians (CACCP), which was founded in 2009 and is affiliated to the China Medical Doctors Association.

Pathways to the intensive care medicine specialty follow 3-4 years of fellowship training in internal medicine, anaesthesia, emergency medicine or general surgery (Du et al. 2010). The recognition of critical care medicine as a specialty in 2009 was in part a recognition of intensivists’ response to healthcare pandemics and emergencies, such as SARS and the Wenchuan earthquake in 2008 (Du et al. 2010). As yet, there is no formal accredited training programme in intensive care medicine. A pulmonary and critical care medicine fellowship training programme has been established by a collaboration between the Chinese Thoracic Society and the American College of Chest Physicians (Qiao et al. 2016), as one of four pilot subspecialities to be recognised by the government. It is hoped that a multidisiciplinary approach to subspecialty training will be adopted going forward (Du and Weng 2014). To that end the China Critical Care Clinical Trials Group (CCCCTG) and the Task Force of Core Competencies in Intensive and Critical Care Medicine Training in China have developed a list of 129 core competencies which will assist in developing training programmes (Hu et al. 2016).

The China Critical Care Clinical Trials Group (CCCCTG) was established in 2009. The group includes 25 tertiary hospitals (21 of which are teaching hospitals) in 21 provinces. The hospitals include 19 general, 4 surgical and 2 medical ICUs (Tables 2-4). The group has completed 12 studies, with 3 ongoing and 2 in the planning. It has 15 papers and 1 book chapter published. It also participates in InFACT, the International Forum for Acute Care Trialists, and in the International Severe Acute Respiratory and Emerging Infection Consortium (ISARIC). 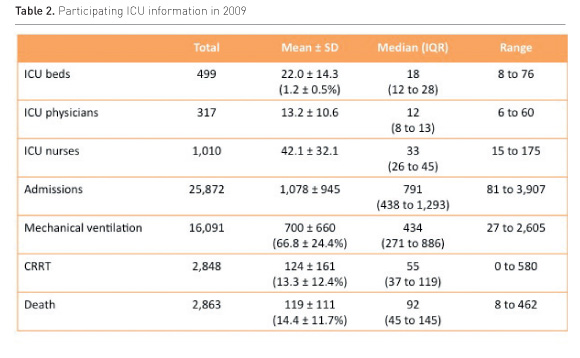 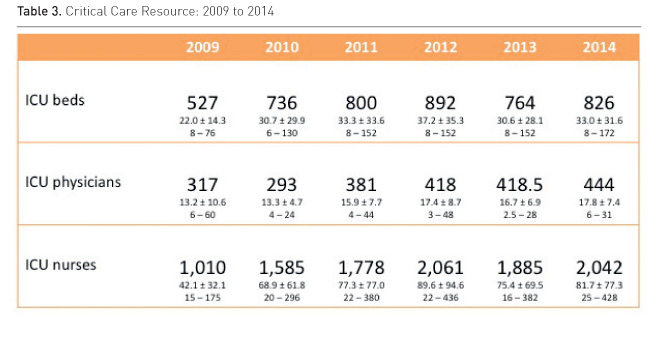 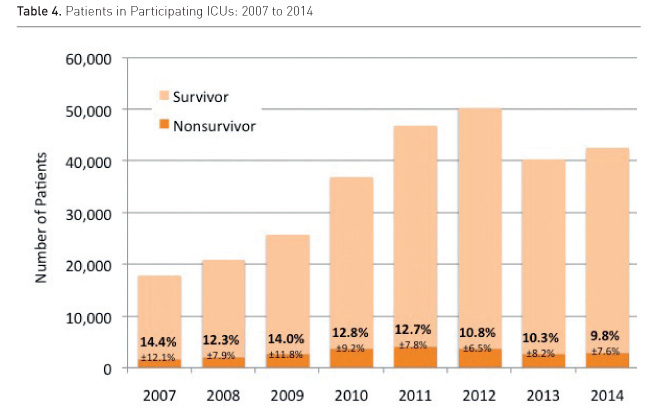 China is increasingly participating in international studies (Table 6). Registration of clinical trials is increasing (from 1,945 registered in 2013 (Ma and Du 2013) to 9,058 for mainland China and 1,298 for Hong Kong registered at clinicaltrials.gov at the time of writing (clinicaltrials.gov/ct2/search/map/ click?map.x=597&map.y=169), of which 3369 were open. The National Natural Science Foundation of China (NSFC) began accepting grant applications for critical care research in 2010. 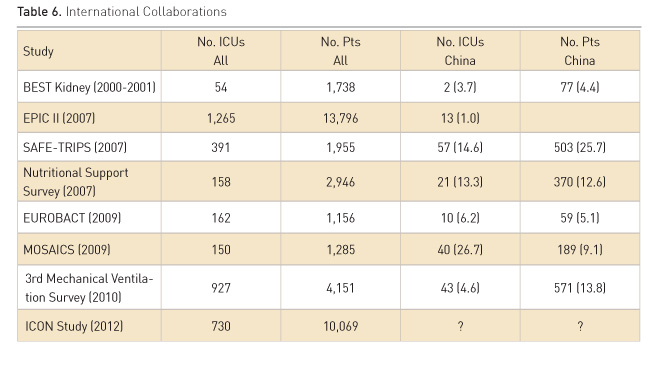 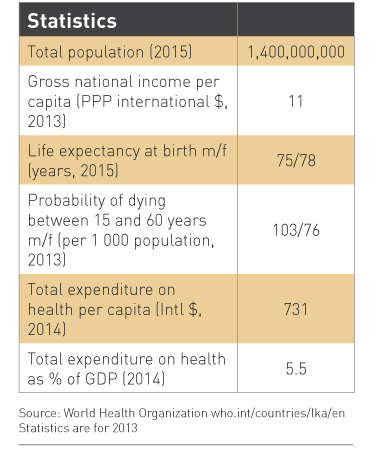 Clinical practice is similar to western countries, but critical care resources are at the lower end. Professional training/accreditation and more participation in research is needed.

Bin Du declares that he has no conflict of interest.

Du B, Weng L (2014) A multidisciplinary approach is key to the development of critical care medicine in mainland China. Chest, 145(6): 1433.
PubMed

According to the World Bank classification, Tunisia is considered a lower middle-income country, corresponding to a country with... Read more

Critical care units are home to some of the most sophisticated patient technology within hospitals. In parallel, the field of... Read more

“Vision without action is a daydream. Action without vision is a nightmare.”

The AKIpredictor: An Online Calculator to Predict Acute Kidney Injury

Advancing Research in the Intensive Care Unit via the Integration of a Nursing Professor Advances in healthcare and management... Read more

China, Intensive Care Overview of the history and current state of intensive care in China.